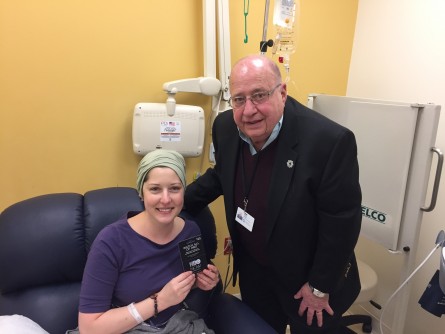 David Jurist, of The Eileen Fund, presents Raina Glesias with the HBO Now programing gift card. Raina is the first patient at the John Theurer Cancer Center to receive the gift card, which can be used to access HBO Now programming in her home or in the medical center on her personal device.

“We are very grateful to HBO for demonstrating this true generosity of spirit and resources,” said Ihor S. Sawczuk, M.D., president of Hackensack University Medical Center. “This will be a welcome distraction to patients while they are here receiving treatment and it also provides them the flexibility to continue watching at home.”

HBO is donating gift cards to enable patients to try HBO Now programming during their treatment period at the Cancer Center.

“The HBO Now programming gift cards offer patients much needed respite during a difficult time,” said David Jurist, an advocate for cancer patients, who has spent more than 35 years of service on various Hackensack University Medical Center boards and committees. The David and Alice Jurist Institute for Research is home to research, development and innovation on the medical center’s campus. This gift is made through the Hackensack University Medical Center Foundation and The Eileen Fund, which honors the memory of David and Alice Jurist’s daughter, Eileen.   Patient, Raina Glesias, received the first card.

“What a great and thoughtful surprise it was to receive the HBO Now Programming gift card,” said Raina. “It will definitely come in handy and help time pass during my chemo treatments to watch my favorite shows. Receiving the card really made my day.”

The gift cards, which are being distributed at the John Theurer Cancer Center, can be used to access HBO Now programming in patients’ homes or in the medical center on personal devices.

“Entertainment brings people together in so many ways. HBO is grateful for the opportunity to partner with Hackensack University Medical Center Foundation,” said Pam Hacker, Director of Corporate Social Responsibility at HBO. “Through this partnership, HBO is able to extend its entire HBO NOW platform to the patients at Hackensack in hopes of creating a more comfortable environment.”

As part of a broader relationship between Hackensack University Medical Center and HBO, HBO employees paid a pre-holiday visit to the Joseph M. Sanzari Children’s Hospital to play games with pediatric patients and provide a special guest appearance by Sesame Street’s Elmo. This was the third HBO-sponsored visit to the Children’s Hospital. The joy and happiness in the faces of the children were priceless.

Drive philanthropic, pro-social, employee and community engagement initiatives with a focus on education to identify and nurture the next generation of creative storytellers.