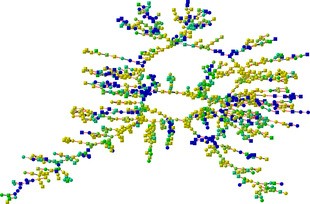 Happiness in a social network: The graph shows the largest component of friends, spouses and siblings in 2000. Circles are females, squares are males and the lines between them indicate relationships (black for siblings, red for friends and spouses). Colors show the average happiness of a person and all of his or her social relations, with blue for sad, yellow for happy and shades of green for inbetween.

Newswise — A laugh can be infectious. You don't need a sophisticated study to tell you that. But does this happy contagion vanish as quickly as a smile?

New research from James Fowler of UC San Diego and Nicholas Christakis of Harvard Medical School shows that happiness spreads far and wide through a social network " traveling not just the well-known path from one person to another but even to people up to three degrees removed.

This holiday season, during gloomy economic times " which, if things get dire enough, might be called a "depression" " it is heartening to know, said Fowler, that "happiness spreads more robustly than unhappiness" and seems to have a greater effect than money.

The study is being published in the British Medical Journal.

"Scientists have been interested in happiness for a long time," said Fowler. "They've studied the effect of everything from winning the lottery to losing your job to getting sick, but they never before considered the full effect of other people. We show that happiness can spread from person to person to person in a chain reaction through social networks."

"One of the key determinants of human happiness is the happiness of others," said Christakis. "An innovative feature of our work was exploring the idea that emotions are a collective phenomenon and not just an individual one."

Christakis and Fowler used data from the Framingham Heart Study to recreate a social network of 4,739 people whose happiness was measured from 1983 to 2003. To assess the participants' emotional wellbeing, they relied on answers to four items from the Center for Epidemiological Studies Depression Scale: "I felt hopeful about the future" ; "I was happy" ; "I enjoyed life" ; and "I felt that I was just as good as other people."

The research shows that happiness loves company. Happy people tend to cluster together, and, on the surface, people with more social contacts seem generally happier. Fowler and Christakis observe, however, that what matters there is not just the total number of connections but the number of happy ones.

On average, every happy friend increases your own chance of being happy by 9 percent. Each unhappy friend decreases it by 7 percent.

Unhappiness also spreads, but not nearly as much.

"The effects we observe may not seem like much at first," said Fowler, "but consider that $5,000 extra dollars, in 1984, was associated with just a 2 percent increase in happiness and you see that the power of other people is incredible. Someone you don't know and have never met " the friend of a friend of a friend " can have a greater influence than hundreds of bills in your pocket."

The structure of connections matters, too. "Remarkably," said Fowler, "where we sit in the social network has a big impact on how happy we are."

According to the study, individuals' happiness depends not only on how many friends they have but also on how many friends their friends have. In social-network terms, this is known as "centrality." And the more central a person is " the better connected their friends or the wider the social circle " the more likely they are to become happy. (The effect does not work the other way around: Becoming happy doesn't widen a social circle.)

Fowler and Christakis also looked at what happens to happiness with distance. When a friend who lives within a mile becomes happy, it increases the probability a person is happy by 25 percent. More distant friends have no significant effect. Similar effects are seen in siblings who live within a mile and in co-resident spouses versus distant siblings and distant spouses. Next-door neighbors have a significant effect, 34 percent, while neighbors further away, even on the same block, do not.

"We think the spread of emotion has a fundamental psychobiological aspect," said Christakis. "Physical personal interaction is necessary, so the effect decays with distance."

The effect also decays with time.

There are several practical implications to the work, not least of which, Fowler said, might be to take greater responsibility for your own happiness because it affects dozens of others. "The pursuit of happiness is not a solitary goal. We are connected, and so is our joy."

The study follows up on research by Fowler and Christakis published in the New England Journal of Medicine documenting social-network effects in obesity and smoking cessation.

Editor's note: PDF of the paper and supplementary materials are available.