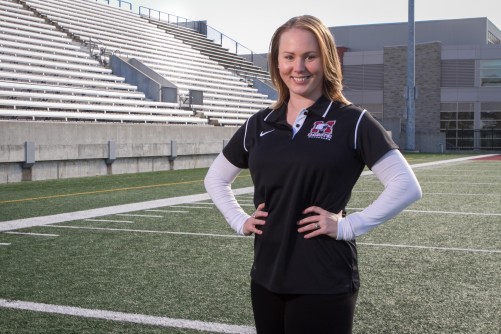 Newswise — McMaster University neuroscientists studying sports-related head injuries have found that it takes less than a full concussion to cause memory loss, possibly because even mild trauma can interrupt the production of new neurons in a region of the brain responsible for memory.

Though such losses are temporary, the findings raise questions about the long-term effects of repeated injuries and the academic performance of student athletes.

The researchers spent months following dozens of athletes involved in high-contact sports such as rugby and football, and believe that concussions and repetitive impact can interrupt neurogenesis — or the creation of new neurons — in the hippocampus, a vulnerable region of the brain critical to memory.

The findings were presented today (Tuesday, November 14th) at the Society for Neuroscience’s annual conference, Neuroscience 2017, in Washington D.C.

“Not only are newborn neurons critical for memory, but they are also involved in mood and anxiety,” explains Melissa McCradden, a neuroscience postdoctoral fellow at McMaster University who conducted the work. “We believe these results may help explain why so many athletes experience difficulties with mood and anxiety in addition to memory problems.”

For the study, researchers administered memory tests and assessed different types of athletes in two blocks over the course of two years.  In the first block, they compared athletes who had suffered a concussion, uninjured athletes who played the same sport, same-sport athletes with musculoskeletal injuries, and healthy athletes who acted as a control group.

Concussed athletes performed worse on the memory assessment called a mnemonic similarity test (MST), which evaluates a person’s ability to distinguish between images that are new, previously presented, or very similar to images previously presented.

In the second study, rugby players were given the MST before the season started, halfway through the season, and one month after their last game.  Scores for injured and uninjured athletes alike dropped midseason, compared to preseason scores, but recovered by the postseason assessment.

Both concussed and non-concussed players showed a significant improvement in their performance on the test after a reprieve from their sport.   For the concussed athletes, this occurred after being medically cleared to return to full practice and competition.  For the rugby players, they improved after approximately a month away from the sport.

If neurogenesis is negatively affected by concussion, researchers say, exercise could be an important tool in the recovery process, since it is known to promote the production of neurons.  A growing body of new research suggests that gentle exercise which is introduced before a concussed patient is fully symptom free, is beneficial.

“The important message here is that the brain does recover from injury after a period of reprieve,” says McCradden. “There is a tremendous potential for the brain to heal itself.”