Heads Up in the Triassic! 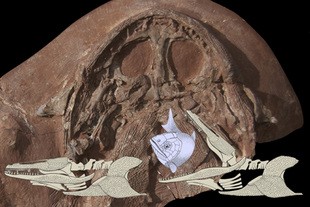 Newswise — When you take a bite out of a hamburger or chomp down on a piece of gum, you share this function of the lower jaw with the vast majority of animals. But not all: for some animals, lifting the head rather than dropping the jaw is a good idea. This bizarre reversal of how feeding occurs was achieved in 210-million-year-old amphibians, as described in the December 2008 issue of the Journal of Vertebrate Paleontology.

The animals in question are plagiosaurs " a group of flat-headed, armored amphibians unrelated to living amphibians such as frogs, salamanders and caecilians. Fossils of this group of animals have been known for a hundred years, but finds of complete specimens have been elusive. The article, authored by a team led by Dr. Farish A. Jenkins, Jr. of Harvard University, describes new, relatively complete material of a plagiosaur called Gerrothorax pulcherrimus from the 210-million-year-old Fleming Fjord Formation of East Greenland. "With their very flat, heavily armored bodies, short, stubby limbs, massive shoulder girdles and well-developed gills, these amphibians are an oddity by any measure," says Dr. Jenkins. "The animals could throw their heads upward and backward, creating a huge mouth gape with only the slightest lowering of the lower jaw"¦ perfect for a bottom-dwelling ambush predator," he continues. By special adaptation of the joint between the skull and first neck vertebra, the animal was able to raise its head relative to its lower jaw by as much as 50 degrees, giving it the wide gape it needed to swallow its unsuspecting prey. "That the same species is found in Greenland as well as Western Europe and Scandinavia suggests that their unique structure was hugely successful," said Dr. Anne Warren of La Trobe University in Melbourne, Australia, a member of the team that conducted the study.