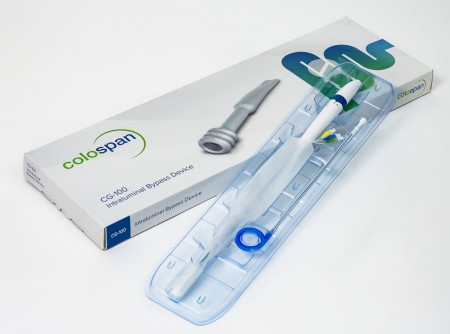 The CG-100™ intraluminal bypass device is temporarily inserted into the gastrointestinal tract and designed to reduce diverting stoma rates, and the need for an ostomy bag, in patients undergoing gastrointestinal resection procedures due to colorectal cancer treatment.

Newswise — DETROIT – Henry Ford Health System is the first in the country to perform a procedure using the CG-100™ intraluminal device, which is temporarily inserted into the gastrointestinal tract and designed to reduce diverting stoma rates, and the need for an ostomy bag, in patients undergoing gastrointestinal resection procedures due to colorectal cancer treatment.

When a patient has a cancerous part of their intestine surgically removed, the intestinal tract must be reconnected. While the surgically reconnected intestinal tract is healing, patients typically require a stoma, also known as an ostomy, which is a surgical opening on their abdomen that connects to their digestive tract. The stoma diverts digestive waste into an ostomy bag outside the abdomen and keeps it away from the site of reconnection. The ostomy must be reversed when it is no longer needed, which requires additional surgery and recovery time for the patient.

Created by Colospan Ltd., the CG-100 device is a silicone sheath that is introduced into the intestinal tract through the rectum, no surgery required, and covers the site where the intestinal tract has been reconnected. This sheath aims to prevent or reduce the contact of fecal material with the site of reconnection, avoiding the need for a stoma. After 10 days, when the risk for leakage is reduced, the sheath is removed without any additional surgery.

“One of the most serious complications that can happen after part of the gastrointestinal tract is surgically removed is a leak at the site of the resection,” said Craig Reickert, M.D., division head of Colon and Rectal Surgery at Henry Ford Cancer Institute. “While an ostomy procedure can reduce the risk of this type of leak, it is invasive and can be challenging for the patient to live with. One of the greatest potential benefits of this device is that it not only reduces the need for a stoma, it also does not require additional surgery to implant or remove.”

The first CG-100 procedure, which was performed at Henry Ford Hospital by colon and rectal surgeon Surya Nalamati, M.D., is part of a Food and Drug Administration Investigational Device Exemption clinical trial that is comparing the CG-100 device to a diverting stoma, the current standard of care treatment for colorectal surgery. Henry Ford is the only site in Michigan, and one of just 12 sites nationwide, currently enrolling colorectal cancer patients in this clinical trial.

The CG-100 clinical trial is multi-center and randomized, so patients who meet study requirements and agree to enter the study are randomized to either be treated with the CG-100 intraluminal bypass device or to receive a diverting stoma. The patient’s care team will continue to follow up with them for up to 39 weeks after surgery.

According to the Centers for Disease Control and Prevention, in 2017 – the latest year for which incidence data are available – 141,425 new cases of colorectal cancer were reported in the United States, and 52,547 people in the U.S. died of this cancer. While an ostomy procedure can be lifesaving for colorectal cancer patients, it also carries with it risks of complications, such as incisional hernia, surgical site infection and anastomotic stenosis.