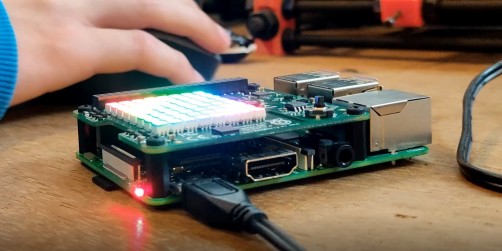 The Raspberry Pi computer together with the Sense Hat add-on board, used to measure the magnetic field.

Newswise — WASHINGTON, May 23, 2022 – A group of high school students used a tiny, inexpensive computer to try to measure Earth's magnetic field from the International Space Station, showing a way to affordably explore and understand our planet.

In the American Journal of Physics, published on behalf of the American Association of Physics Teachers by AIP Publishing, three high school students from Portugal, along with their faculty mentor, report the results of their project. The students programmed an add-on board for the Raspberry Pi computer to take measurements of Earth's magnetic field in orbit. This add-on component, known as the Sense Hat, contained a magnetometer, gyroscope, accelerometer, and sensors for temperature, pressure, and humidity.

The European Space Agency teamed up with the U.K.'s Raspberry Pi Foundation to hold a contest for high school students. The contest, known as the Astro Pi Challenge, required the students to program a Raspberry Pi computer with code to be run aboard the space station.

"I saw the Astro Pi challenge as an opportunity to broaden my knowledge and skill set, and it ended up introducing me to the complex but exciting reality of the practical world," Lourenço Faria, co-author and one of the students involved in the project, said.

The IGRF data is updated every five years, so the students compared their measurements, taken in April 2021, with the latest IGRF data from 2020. They found their data differed from the IGRF results by a significant, but fixed, amount. This difference could be due to a static magnetic field inside the space station.

The students repeated their analysis using another 15 orbits worth of ISS data and found a slight improvement in results. The students thought it surprising the main features of Earth's magnetic field could be reconstructed with only three hours' worth of measurements from their low-cost magnetometer aboard the space station.

Although this project was carried out aboard the space station, it could easily be adapted to ground-based measurements using laboratory equipment or magnetometer apps for smartphones.

"Taking measurements around the globe and sharing data via the internet or social media would make for an interesting science project that could connect students in different countries," said Nuno Barros e Sá, co-author and faculty mentor for the students.

The American Journal of Physics is devoted to the instructional and cultural aspects of physics. The journal informs physics education globally with member subscriptions, institutional subscriptions, such as libraries and physics departments, and consortia agreements. It is geared to an advanced audience, primarily at the college level. Contents include novel approaches to laboratory and classroom instruction, insightful articles on topics in classical and modern physics, apparatus, and demonstration notes, historical or cultural topics, resource letters, research in physics education, and book reviews. See https://aapt.scitation.org/journal/ajp.