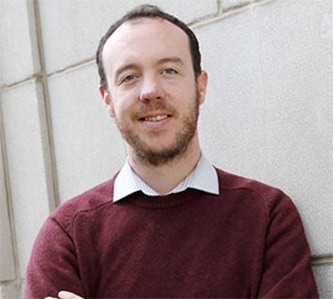 Newswise — The late-20th century revolution in thinking about and caring for people with developmental disabilities will be the focus of a new National Science Foundation-funded study by a Creighton University history professor.

Andrew Hogan, PhD, an assistant professor in the Department of History, has earned a three-year, $132,000 grant from the NSF’s Science, Technology and Society program to study the evolution of attitudes and narratives about people with developmental disabilities in society, and in the medical community specifically.

“It’s really been in the last 40 to 50 years that we’ve seen a more positive view on disability take root in our society and government,” Hogan said. “To what extent has that had an impact on how medical professionals view their patients with developmental disabilities and interact with them? That’s the question I want to examine.”

This project follows close on the heels of Hogan’s 2016 book, Life Histories of Genetic Disease: Patterns and Prevention in Postwar Medical Genetics (Johns Hopkins). The book traces the history of human genome mapping and how those efforts complicated our understanding and management of developmental disabilities.

Commencing his new study, Hogan will look at the issue through the lenses of three different fields: clinical psychology, genetic counseling and pediatrics.

In clinical psychology, Hogan will have a wealth of research close at hand. Wolf Wolfensberger, PhD, a faculty member at the University of Nebraska Medical Center in the 1960s and 1970s, was a pioneer of disability advocacy and promoted the full integration of individuals with disabilities in society. Wolfensberger died in 2011 and entrusted his papers to UNMC.

Hogan has spent much of the last year looking through the Wolfensberger archive, with the assistance of Creighton undergraduate students, examining how he promoted the joint ideas of normalization and deinstitutionalization of people with intellectual disabilities.

“Wolfensberger had a profound impact on social policy through his suggestion that people with disabilities can and should be allowed to lead culturally normal and valued lives,” Hogan said.

Up until the last quarter of the 20th century, many families with a child born with intellectual disabilities were encouraged to consider institutionalization. Indeed, families had few other options since the education of children with developmental disabilities was not guaranteed by state or federal law.

Then, in 1975, the U.S. Congress passed the Individuals with Disabilities Education Act, ushering in a new era in special education in public schools. The subsequent series of supportive legislation culminated in the passage of the Americans with Disabilities Act in 1990.

To this day, residential institutions continue to play a role in educating and supporting some people with intellectual disabilities. As another part of the grant, Hogan said that he would examine the history of ongoing debates over the continuing value and role of institutionalization.

Hogan is also interested in tracing the roots of the larger science and policy deliberations that have taken place in the academic and scientific community and in the political arena.

“It’s all very up and down,” he said. “There’s not a unidirectional trend. The progressive trend in the 1960s faced pushback in the 1980s because many of these programs were expensive and challenging to improve. At this time, there was also a reemergence of genetic research on disability, which put the focus back on individual medical fixes rather than social reforms. The stigmatization of disability has gone through many historical phases, and this project seeks to study evolving perceptions of disability in the medical community up to the present day.”

The grant allows Hogan to bring on several undergraduate students to help with the research. He also teaches a course on the History of Disability, in which students ponder the tension between social and medical perspectives regarding disabilities.

“We try to look at where that theoretical gap between these perspectives has been bridged in the past”, Hogan said, “and to use these lessons from history to reduce the ongoing tensions and distrust between medical professionals and disability advocates, which do not necessarily serve the interests of average people with disabilities in their everyday lives.”