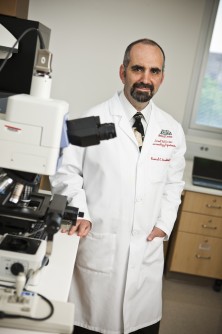 Newswise — This has been a good week for breakthroughs in HIV/AIDS.

Earlier this week, the Food and Drug Administration approved a daily pill, Truvada, which reduces the risk of HIV infection. Today, a University of Nebraska Medical Center research team’s progress toward developing weekly or twice-monthly injectable antiretroviral therapy (ART) nanomedicines for patients with human immunodeficiency virus (HIV) infection will be highlighted as the cover story in the Journal of Infectious Diseases.

A long-acting, nanoformulated ART (nanoART) would be a substantive improvement over daily and sometimes more complex regimen of pills, said Howard Gendelman, M.D., the lead investigator on the development of nanoART for HIV/AIDS and professor and chairman of the department of pharmacology and experimental neuroscience (PEN) at UNMC.

The journal article hails the successful testing of UNMC’s ART injectables as treatment of HIV-infected mice and in preventing new infections.

“We actually followed the process exactly as we would with a person – and it worked,” Dr. Gendelman said. “This is all very exciting. Although there are clear pitfalls ahead and the medicines are not yet ready for human use, the progress is undeniable.”

Dr. Gendelman said one of the project’s real advantages is in the nanoformulations. “NanoART is cell directed,” he said. “So when you take a pill, the pill travels throughout the body indiscriminately. In these nanomedicines, you can use the body’s own cells to direct the medicine where you want it to go.”

The UNMC project directs the medicine to the monocyte-macrophage, cells which carry the drug particle to sites of the body specifically where HIV grows.

“You’re using the cell that is the target for the virus to deliver the drug against the virus,” Dr. Gendelman said.

Dr. Gendelman calls the progress made “a Nebraska invention,” as it involved so many of the state’s scientists in different disciplines working together. He said this marks the third article his team has had published in major biomedical journals in recent months with all the articles related to the nanomedicine injectable therapy.

The advance to use the new nanomedicines to specifically target reservoirs for viral infection was explained by Georgette Kanmogne, Ph.D., associate professor in PEN, lead investigator, and published in the International Journal of Nanomedicine. This paper describes how these drug inventions can enter the brain and ameliorate nervous system disease.

The third study, published in Trends in Neurosciences, is a research area led by Larisa Poluektova, M.D., Ph.D., associate professor in PEN, and the developer of the mouse models of HIV/AIDS used in study.

“We work as a team and work effectively as a team with different scientists with very different disciplines involved in different aspects of the work,” Dr. Gendelman said.

This research team is made up of two UNMC colleges, four departments and two universities. The drugs were developed in UNMC labs using nanoformulation approaches.

The ART tests in mouse models were made possible by UNMC’s development of specially designed mice. Because mice cannot catch human HIV, UNMC has developed mice with the equivalent of a human immune system. Such a mouse model enables advanced tests on HIV and its treatment.

UNMC is one of a handful of research institutions in the world to have developed such a mouse model, Dr. Poluektova said.

Dr. Kanmogne said an ART injection would be an improvement for HIV patients because it would produce all the medicine needed without the complications of remembering to take pills daily, drug toxicities, buildup of viral resistance, intestinal problems, or the social stigma of pills.

An injectable nanoformulated drug could also be more available for worldwide distribution as the toxicity profiles tested so far are limited, Dr. Gendelman said.

The work was a team effort amongst many and notably Upal Roy, Ph.D., and JoEllyn McMillan, Ph.D., both PEN researchers.

The work will be presented at the forthcoming meeting for the American Society for Nanomedicine, where Dr. Gendelman will serve as conference chair.

Through world-class research and patient care, UNMC generates breakthroughs that make life better for people throughout Nebraska and beyond. Its education programs train more health professionals than any other institution in the state. Learn more at unmc.edu.