"Hobbit" Foot Like No Other In Human Fossil Record 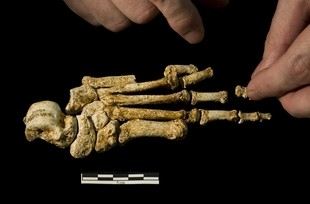 Assembly of the "Hobbit" foot. 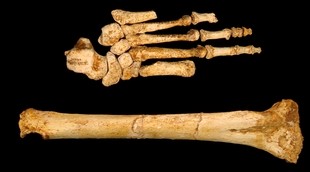 The "Hobbit" foot and tibia.

Newswise — An international team of paleoanthropologists, anatomists and archeologists have published the first scientific analysis of the foot of Homo floresiensis, the fossil found in Indonesia in 2003 and popularly referred to as the "Hobbit." Lead author William L. Jungers, Ph.D., of Stony Brook University, and colleagues documented the Hobbit's unusual combination of ape-like and human-like foot features, which clearly enabled bipedal walking, a hallmark of all humans and their extinct relatives (hominins), despite its surprisingly primitive design. Their findings, reported in the May 7 issue of Nature, provide further evidence that the ancestor of this species was perhaps not Homo erectus but instead another more primitive and remote hominin.

The authors point out that the Hobbit foot has a relative foot length that far exceeds the upper limits for modern humans either of average or short stature. The foot is similar in relative length to pygmy chimpanzees, with long and curved toes, but also sports a short big toe in line with the other toes. While the foot has an overall structure that signals bipedal walking, it appears to have been "flat-footed" and poorly designed for running, one of the critical pedal features believed to characterize human ancesters since the time of Homo erectus.

"A foot like this one has never been seen before in the human fossil record," says Dr. Jungers, Distinguished Teaching Professor and Chair of the Department of Anatomical Sciences at Stony Brook. "Our analysis offers the most complete glimpse to date of how a primitive bipedal foot was designed and differed from that of later hominins and modern humans."

"Arches are the hallmark of a modern human foot," explains co-author Dr. William E. H. Harcourt-Smith of the American Museum of Natural History. "This is another strong piece of the evidence that the 'hobbit' was not like us."

In "The foot of Homo floresiensis," the authors also suggest that despite these feet being dated to the Late Pleistocene age (17,000 years ago), their features together with many other parts of the Homo floresiensis skeleton, might represent the primitive condition for our own genus Homo. This could imply a dispersal event out of Africa earlier than what paleoanthropologists have long thought.

"These particular 'hobbit' feet may have never walked into Mordor, but they certainly remind us how little we know about which other hominin species walked out of Africa and the many possible places their feet helped take them," adds co-author Dr. Matthew Tocheri, of the Smithsonian Institution.

Dr. Jungers points out that "if the feet and skeleton of the 'hobbits' are instead the result of 'island dwarfing' from the Southeast Asian Homo erectus as some scientists suspect, then an amazing number of evolutionary reversals to primitive conditions had to occur as an unexplained and unprecedented by-product."

Continued excavations on Flores and other parts of Indonesia, to be led by co-author Dr. Mike Morwood, of the University of Wollongong in Australia, in collaboration with Indonesian scientists from the National Research and Development Centre for Archeology in Jakarta, may unearth an answer to the competing theories on the origins and nature of Homo floresiensis.

The research for this international study was supported by grants from the Australian Research Council, the National Geographic Society, the Wenner-Gren Foundation for Antrhopological Research, the Wellcome Trust and the Leakey Foundation.

The Department of Anatomical Sciences is one of 25 departments within Stony Brook University School of Medicine. The department includes graduate and doctoral programs in Anatomical Sciences. Fields of study include research on human evolutionary anatomy, morphology and vertebrate paleontology. Many faculty members in the department are also participants in an interdepartmental graduate program in anthropological sciences that is recognized worldwide for its faculty and research strengths in functional morphology and human evolution.