Newswise — In a an analysis of the size, shape and asymmetry of the cranium of Homo floresiensis, Karen Baab, Ph.D., a researcher in the Department of Anatomical Scienes at Stony Brook University, and colleagues conclude that the fossil, found in Indonesia in 2003 and known as the "Hobbit," is not human. They used 3-D shape analysis to study the LB1 skull of the hobbit and found the shape of the skull to be consistent with a scaled down human ancestor but not modern humans. Their findings, reported in the current online edition of the Journal of Human Evolution, add to the evidence that the hobbit is a new species.

The question as to whether the hobbit was human or another species remains controversial. Some scientists claim the hobbit was a diminutive human that suffered from some type of disease that causes microcephaly, which results in abnormal growth of the brain and causes the cranium to be much smaller than the normal human cranium. But Dr. Baab and co-author Kieran McNulty, Professor of Anthropology at the University of Minnesota, believe their findings counter the microcephaly theory.

"A skull can provide researchers with a lot of important information about a fossil species, particularly regarding their evolutionary relationships to other fossil species," explains Dr. Baab. "The overall shape of the LB1 skull, particularly the part that surrounds the brain (neurocranium) looks similar to fossils more than 1.5 million years older from Africa and Eurasia, rather than modern humans, even though Homo floresiensis is documented from 17,000 to 95,000 years ago."

To carry out the study, Dr. Baab and colleagues collected 3D landmark data on the LB1 skull and a large sample of fossils representing other extinct hominin species, as well as a comparative sample of modern humans and apes. They performed several analyses of different regions of the skulls. Taken together, these analyses indicated that the LB1 skull shape is that of a scaled down Homo fossil not a scaled down modern human.

The results of the analysis of the asymmetry of the skulls, which refers to differences between the right and left sides of the skull, refutes the suggestion that the LB1 skull was that of a modern human with a diagnosis of microcephaly. In modern humans, a high degree of asymmetry may indicate that the individual was diseased. At least one scientific study on the asymmetry of LB1 supported the argument that this individual had microcephaly. Conversely, Dr. Baab and colleagues found the degree of asymmetry of the LB1 skull was not unexpectedly high and therefore not supportive of the diagnosis of microcephaly.

"The degree of asymmetry in LB1 was within the range of apes and was very similar to that seen in other fossil skulls," says Dr. Baab. "We suggest that the degree of asymmetry is within expectations for this population of hominins, particular given that the conditions of the cave in Indonesia in which the skull was preserved may have contributed to asymmetry."

Dr. Baab recognizes that the controversy as to the evolutionary origins of Homo floresiensis will continue, perhaps without an answer. However, all the evidence that she and colleagues illustrate in their article "Size, shape, and asymmetry in fossil hominins: The status of the LB1cranium based on 3D morphometric analyses," suggest that Homo floresiensis was most likely the diminutive descendant of a species of archaic Homo.

The results of this study are also in line with what other researchers in the Department of Anatomical Sciences at Stony Brook University have found regarding the rest of the hobbit skeleton. Drs. William Jungers and Susan Larson have documented a range of primitive features in both the upper and lower limbs of Homo floresiensis, highlighting the many ways that these hominins were unlike modern humans.

The Department of Anatomical Sciences is one of 25 departments within the Stony Brook University School of Medicine. The department includes graduate and doctoral programs in Anatomical Sciences. Fields of study include research on human evolutionary anatomy, morphology and vertebrate paleontology. Many faculty members in the department are also participants in an interdepartmental graduate program in anthropological sciences that is recognized worldwide for its faculty and research strengths in functional morphology and human evolution. 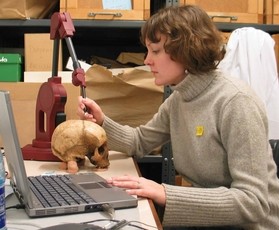 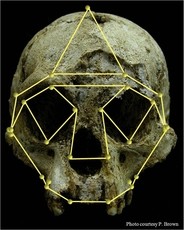 Caption: The 3-D landmarks superimposed from the front of the LB1 Skull of Homo floresiensis, also known as the Hobbit, helped researchers conclude that the fossil is not human.