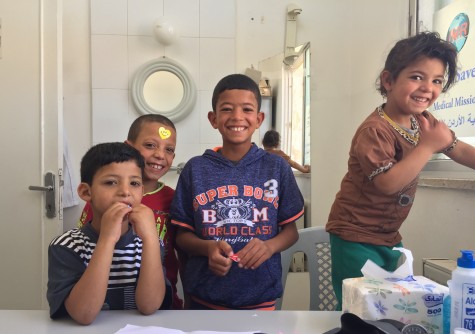 Osman Ahmad, M.D., and a medical mission provided hope to Syrian refugee children, even when they did not have the medicine to treat each person's ailments. 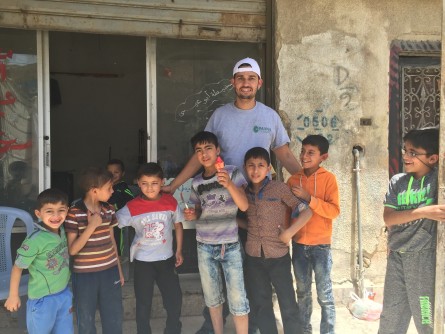 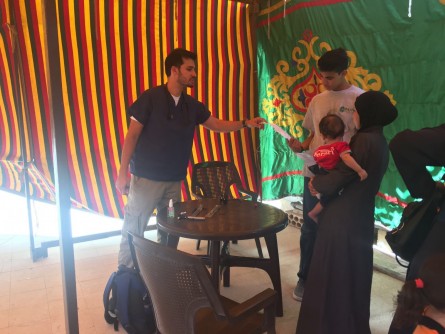 Osman Ahmad, M.D., and a team of medical professionals traveled to Amman, Jordan for a medical mission trip.

Newswise — BIRMINGHAM, Ala. – Many Syrian refugees are retreating to Amman, Jordan, but lack the resources and funds to receive medical care for chronic conditions requiring regular medical exams and treatment. Osman Ahmad, M.D., a pediatric gastroenterology fellow at the University of Alabama at Birmingham, recently joined a team of medical professionals for a five-day medical mission trip, treating more than 2,700 patients at three clinics in urban refugee camps outside of the sprawling metropolis of Amman.

“Most of the patients we treated left Syria due to the ongoing conflicts in their country, which have displaced millions and killed hundreds of thousands,” Ahmad said. “From the generosity and compassion of those who donated, we were able to provide antibiotics, essential vitamins and primary care for those in need.”

Ahmad traveled with a group of volunteers from the Islamic Medical Association of North America, a nonprofit organization based in the United States, to treat refugees who had existing chronic conditions previously treated by Syrian physicians. Refugees with chronic illnesses, like diabetes, hypertension and asthma, struggle to find the appropriate medicine.

“These are the same chronic conditions we treat every day in the United States,” Ahmad said. “For this subset of Syrian refugees, they have been left untreated for months and even years.”

One of the first patients Ahmad cared for was an older Syrian man in his 60s who owned a strip mall in Duoma, a suburb of Damascus, and hiked 5 miles a day to stay healthy. Duoma was an early battleground between the two sides and resulted in many deaths and displacements.

“The man witnessed what so many of the other Syrian refugees who have lived through the war told me, describing the pain of losing multiple family members, the physical scars, and wounds from war, chemical attacks, indiscriminate bombings of apartment complexes, and the tragic loss of innocent life,” Ahmad said. “Now he spends his days worrying, as he is unable to work since he does not have proper identification and is out of his needed medication.”

When Ahmad examined the Syrian man, his blood pressure was elevated, so the team was able to provide a refill for his medication to treat his hypertension.

Following a 2016 study by the Syrian Centre for Policy Research, The Guardian reported, “Syria’s national wealth, infrastructure and institutions have been ‘almost obliterated’ by the ‘catastrophic impact’ of nearly five years of conflict.”

Figures from the SCPR indicate that fatalities caused by war, directly and indirectly, have amounted to 470,000. The report indicates that overall 11.5 percent of the country’s population have been killed or injured since the crisis erupted in March 2011.

“Behind these stark statistics, I was able to witness firsthand the human toll of the crisis,” Ahmad said. “All too often, Syrian refugee families have to decide whether to refill a child’s lifesaving albuterol inhaler for asthma or be able to provide food for the rest of the family.”

As one of the two pediatricians in the group, Ahmad treated children along with their parents. The children had common complaints like constipation, viral upper respiratory infection, headaches and abdominal pain. In addition, a large number of patients treated had conditions that commonly impact refugees, including but not limited to malnutrition, diarrheal illnesses and vitamin deficiencies.

“Some conditions we saw were based on poor living conditions and lack of access to basic health care,” Ahmad said. “We provided care for the ones we could and listened to the rest to provide hope.”

Ahmad treated a family that included a mother and her three children, two boys, ages 12 and 13, and a 6-year-old girl. The family arrived in Jordan four years ago from a suburb of Damascus, which endured early fighting in the conflict.

“I asked the mother if her children had witnessed the war or had they made it out before,” Ahmad said. “She sadly shook her head and tears started to stream down her face. Her tears revealed her pain.”

Her 13-year-old son does not speak much anymore and has suffered enuresis, or bed wetting, since they arrived in Jordan. The emotional distress caused by the aftermath of war has left her son and other refugees with multiple somatic symptoms like headache, abdominal pain, nightmares and insomnia.

The mother’s blood pressure was elevated, so the team refilled her hypertension medication. The 6-year-old girl had a ringworm on her leg that was treated with anti-fungal cream.

Ahmad examined the 13-year-old boy, who exhibited a blank expression with no emotion on his face. Ahmad provided him with a stool softener to alleviate his constipation.

“The images ingrained in the child’s brain are likely images no person should ever have to see, least of all a child,” Ahmad said.

Many of the children and adults who were examined suffered post-traumatic stress disorder from the war, but they lacked medical resources for treatment.

“As we completed treatment, the younger sister noticed a bubble gun that the Arabic interpreter was holding and asked to use it,” Ahmad said. “As the bubbles started to flow out, all the children smiled, even the 13-year-old boy. For this brief moment, they were just kids. The happiness on their mother’s face to see her children laughing was priceless.”

The medical mission team provided hope, even when they did not have the medicine to treat each person’s ailments.

“With each smile, each tear and each story I heard, it gave me more resolve to continue to do medical mission work,” Ahmad said. “Even though these refugees feel forgotten by the world, I saw traces for the hope of a brighter future for their children and themselves in their smiles. Of the many families I met, they were all so grateful for the care we provided them. But, I was more thankful for this opportunity to use my medical training to provide basic health care treatment to those who need it most.”

IMANA partnered with United Muslim Relief in Amman to bring together a group of 11 physician volunteers from the United States, three local pharmacists, local university students who served as Arabic interpreters and UMR support staff, who coordinated the clinics and logistics, for the medical mission to provide treatment and care to Syrian refugees.