Hot Topic: A Potentially Deadly Virus Comes to the U.S. 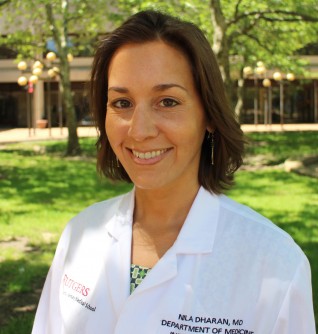 Nila Dharan, a physician and infectious disease researcher at Rutgers, says Americans should pay close attention to the spread of MERS.

Newswise — Health officials in the United States are concerned about the arrival from overseas of a potentially deadly illness called Middle East Respiratory Syndrome, or MERS. The virus that causes MERS is a coronavirus from the same family as SARS, a respiratory illness that got wide attention more than a decade ago when it took more than 700 lives, mostly in Asia.

So far, only a handful of MERS cases have been reported in the U.S., none serious, but in the six Middle Eastern countries where the MERS virus has taken hold, the World Health Organization estimates a death rate of 30 percent among the more than 500 people who have been confirmed to have the disease.

Rutgers Today asked Nila Dharan, a physician and infectious disease researcher at Rutgers New Jersey Medical School, to describe how MERS can spread, and give advice on what you can do to protect yourself.

Rutgers Today: How did MERS come to America, and how likely are ordinary Americans to be sickened by it?

Dharan: It appears to have been carried to this country by people traveling from the Middle East. On the Arabian Peninsula, the disease has appeared in clusters in households and health care settings, suggesting to public health officials that the virus is transmitted through close contact. This usually means either sharing a confined space with an infected person, being coughed or sneezed on in close quarters, or sharing meals or eating utensils. While there is still limited information and we are still learning about how this virus is spread, it is suggested that people’s risk of being infected through more casual interactions is relatively low.

Rutgers Today: What symptoms accompany a MERS infection, and if people start feeling sick, what should they do?

Dharan: This virus can make people feel as if they have a bad case of the flu, and while nobody is immune, people with underlying medical conditions are probably most susceptible, the same as with the other illnesses such as the flu. If you have symptoms like severe shortness of breath or coughing that is getting worse, or you’re feeling malaise, you should be seen by a health professional, as is true for any severe respiratory illness.

Rutgers Today: How can people protect themselves from getting sick?

Dharan: The same prevention methods apply here as for any infectious disease. Wash your hands often, and avoid touching your eyes, nose or mouth with hands that you haven’t washed. Disinfect surfaces that are touched frequently, and of course avoid close contact with people who are sick. As long as MERS is spreading, pay attention to media reports on where it has been identified. We have not seen any cases yet in New Jersey, but with all the travelers who come through our big airports that could change.

You also can help protect both yourself and your loved ones by cooperating with state and local health officials if they contact you, so they can keep an eye on you if you might have been exposed to anyone who has MERS.

Rutgers Today: About 11 years ago, Americans were warned about a disease from Asia called SARS, but only eight cases were confirmed in the U.S. with no fatalities. We’ve also gotten warnings about flu outbreaks that didn’t materialize. So how concerned about MERS do we even need to be?

Dharan: There’s always a debate about how seriously to take public health warnings. But there hasn’t been time yet to gather concrete information that can help us predict how dangerous this outbreak may or may not be. We do know that there is no treatment and no vaccine for MERS. The best we have are antivirals whose effectiveness is uncertain and whose use is not currently recommended. We also know that nearly one third of MERS patients in the Middle East have died. So taking all the recommended precautions and paying close attention to health messages and the evolving information on this topic is the smart thing to do.