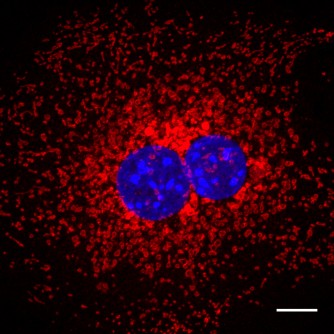 When the process of autophagy is defective, cells are unable to recycle cellular organelles such as mitochondria (shown in red) to generate molecular building blocks when needed. Cell nuclei shown in blue.

Newswise — Researchers at the Salk Institute for Biological Studies have discovered how AMPK, a metabolic master switch that springs into gear when cells run low on energy, revs up a cellular recycling program to free up essential molecular building blocks in times of need.

In a paper published in the Dec. 23, 2010 edition of Science Express, a team led by Reuben Shaw, PhD., Howard Hughes Medical Institute Early Career Scientist and Hearst Endowment assistant professor in the Salk's Molecular and Cell Biology Laboratory, reports that AMPK activates a cellular recycling process known as autophagy by activating an enzyme known as ATG1, that jumpstarts the process.

The newly uncovered direct molecular connection between AMPK and ATG1 is significant because dysfunctions in both AMPK signaling and autophagy are implicated in a plethora of aging-related diseases, including type II diabetes, cancer, and neurodegenerative diseases such Parkinson’s and Alzheimers.

Despite its ominous name—derived from “self” (auto) and “eating” (phagy)—cells use autophagy to dispose of debris before it becomes toxic enough to kill a cell. “Autophagy is an ancient process that evolved to break down components cells don't need to create things they do need,” says Dan Egan, a graduate student in Shaw’s lab and the study’s first author.

Previously, Shaw’s lab had not only demonstrated that AMPK is deregulated in certain forms of cancer but also that the enzyme is a critical target of the type 2 diabetes drug metformin. “Taking a drug that activates this pathway, like metformin, is the equivalent of taking several different drugs,” says Shaw, reeling off a list of anti-tumor and anti-diabetes pathways activated by AMPK. “Now we can add regulation of autophagy to that list.”

Shaw’s laboratory has not previously studied autophagy but has had a long-term interest in AMPK, which senses when energy is low and slows cell growth. “Since AMPK plays such a central role in regulating our cells’ energy household, we wanted to know how it exerts its power over so many cellular processes,” says Shaw.

His team initiated the study by defining a unique targeting sequence used by AMPK to transmit its signals and then using bioinformatics and biochemistry to identify proteins that act as AMPK targets. One of the prime suspects identified in that that effort was the protein Atg1/ULK1, a factor that triggers autophagy in yeast.

To test the effects on autophagy of deregulating these enzymes, the group focused on large intracellular structures called mitochondria, whose role is to generate energy. “Mitochondria are easily damaged in detoxifying tissues like liver,” explains Shaw. “A critical way that defective mitochondria are turned over is through a special form of autophagy called mitophagy.”

In that case, cells would envelope their unhealthy mitochondria in a membrane, dump them in a cellular acid pit, and recycle the remains. If AMPK initiated the process, cells genetically engineered to lack AMPK might show altered mitochondrial turnover compared to normal cells.

And that is precisely what the researchers saw: liver cells in which AMPK had been eliminated contained too many mitochondria, many of which looked spindly, indicating they were moribund, and confirming that AMPK was directing autophagic waste disposal. “We found that the ability to recycle their defective mitochondria allowed cells to survive starvation better,” says Shaw.

To tie it all together, the researchers used the roundworm C. elegans, a popular model system in aging research, to show that activated AMPK directly activated autophagy through a signal relayed by the worm version of Atg1/ULK1—experiments done in collaboration with Malene Hansen, Ph.D., of La Jolla’s Sanford-Burnham Medical Research Institute and with help from Andy Dillin, Ph.D., of Salk's Molecular and Cell Biology Laboratory,

“The worm experiments show that the connection between AMPK, ULK1 and autophagy is conserved across evolution and not just a recent adaptation specific to mammals,” says Egan. “Processes fundamental to life, like energy regulation, metabolism and autophagy, share components across human, mouse, worm, and yeast species.”

But if you aren’t an evolutionary biologist, you still have a personal stake in AMPK signaling if you: exercise regularly, feel good about drinking red wine, take diabetes meds, and/or starve yourself in hopes of a long life—all of which reportedly stimulate AMPK signals.

Add to that the possibility that AMPK may have anti-tumor activity and it is no wonder that pharmaceutical companies are keenly interested in what proteins AMPK “talks to” and how drugs that stimulate that conversation work.

About the Salk Institute for Biological Studies

The Salk Institute for Biological Studies is one of the world's preeminent basic research institutions, where internationally renowned faculty probe fundamental life science questions in a unique, collaborative, and creative environment. Focused both on discovery and on mentoring future generations of researchers, Salk scientists make groundbreaking contributions to our understanding of cancer, aging, Alzheimer's, diabetes, and infectious diseases by studying neuroscience, genetics, cell and plant biology, and related disciplines.