How Fans Mourn the Death of Popular TV Series 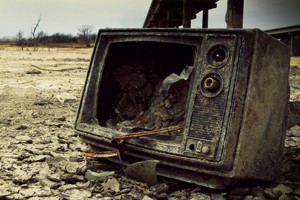 Mourning the death of a TV series

Newswise — WASHINGTON, D.C. (August 07, 2014)— Just like Friends, Breaking Bad and Lost, each year a few TV series must come to an end creating a daunting task for writers to provide viewers with closure and leave them feeling justified for investing countless hours watching over the years. New research finds that leading up to the cancellation of a popular long running TV series, super-fans experience grief and pain similar to mourning the death of a “real” loved one.

Sadness often occurs due to the demise of beloved characters and over the inability to know “what happens next.” Also, some fans feel a strong sense of loss surrounding the collapse of their social network of watchers who participated in group viewing and discussion for years.

New research coauthored by Cristel Russell, an associate professor of marketing with American University’s Kogod School of Business, shows what affect the loss of a TV series, which is a long-form narrative brand, has on consumer behavior and what happens to the consumer brand relationship.

“TV fuels and sustains social and cultural bonds. TV series are especially powerful because they unfold over time, giving viewers a chance to think about and discuss the characters and the storylines with fellow viewers," said Russell. “Many societal trends, for better or for worse, emerge from TV series and become part of our cultural lingo and lifestyles, in the real world.”

For the study, titled “When Narrative Brands End: The Impact of Narrative Closure and Consumption Sociality on Loss Accommodation” published in the April issue of the Journal of Consumer Research, Professor Russell, and her colleague Hope Jensen Schau, spent more than a decade following loyal fan bases of four popular television shows—Entourage, The Sopranos, All My Children, and New Zealand drama Outrageous Fortune. They documented fans’ relationship with the shows and their reactions to the shows’ “deaths” through participation observation, extended interviews, and analysis of online fan forums.

Coping with a “Good Death”The researchers found that consumer reactions to the death of their favorite shows, and thus the characters who had become like friends, depended heavily on how the fans interacted with the brand, and whether or not their show had a “good” death.

Fans were unhappy when loose ends were left unresolved or when characters did not ride off in the sunset. For example, the loss of the Sopranos cut deeper and prompted widespread fan disappointment and outrage over the ambiguous ending.

Russell believes that finales with an unambiguous ending provided fans with better closure, which is an important part of any grieving process. With closure fans are allowed to grieve “a life well lived” for their favorite characters and they are more likely to continue to consume the brand in other forms, such as rerun episodes and boxed DVD sets.

Some Entourage fans found closure because the show ended on a high note before the storyline became stale. As a result, the brand now lives in these consumers’ memories and evokes feelings of gratitude and admiration. According to the study, this is more common among consumers experiencing withdrawal of a brand that is not due to sagging popularity, declining quality, or obsolescence.

Loss AccommodationThe research reveals a loss accommodation process where super-fans wrestle with the following questions: Without the weekly television gathering to get “the gang” together, what keeps us involved and connected? Now that the brand is over, how do I reshape my identity without my favorite show? Will there be a spinoff?

“Fans who have come to really love and care for their “friends” on TV experience their loss just like real-life break ups,” said Professor Russell. “This loss is dealt with in ways that are similar to physical loss by seeking others who feel the same way and finding ways to remember the good times they had when the show was alive.”

Loss accommodation can also spur consumers to take action when fans feel that their beloved friends on the other side of the TV screen were discarded or met an untimely end. For example, when producers announced the cancellation of the long-running soap opera All My Children, fervent fans were both shocked and angered. They banded together to petition the network to keep All My Children on the air. Fans formed online forums to discuss the betrayal they felt, but ultimately were forced to settle for a limited set of online episodes. The online “rebirth” of the show caused fans to suffer loss for a second time as the digital version was cancelled ahead of schedule.

Despite the negative outcome, fans of the soap opera are representative of the power a narrative brand has to build and cultivate unique communities. Russell found that whether these communities exist in the real world (such as the friends who watch their favorite show together each week) or online (as with the popular fan forums that exist for nearly every major series today); it is quite often the loss of these communities that hits fans hardest when a show is canceled.

For Future StudyThis study acknowledges that future research is needed to unpack the psychology behind how consumers cope with brand relationship stressors. Also, within the loss accommodation process, more research should focus on how social media helps consumers’ grieve by providing an online community of receptive and sympathetic fellow fans. Lastly, Russell’s study can inform future research on narrative brands and consumer brand relationships to determine what is a healthy lifespan for a brand, how firms can breathe new life into a dying brand, when to bring a dead brand back to life and how TV series can keep consumers engaged during critical junctures in the consumer brand relationship.

About American UniversityLocated in Washington D.C., American University is a leader in global education, enrolling a diverse student body from throughout the United States and more than 140 countries and providing opportunities for academic excellence, public service, and internships in the nation’s capital and around the world.