How Scientist Designed a System for Pose Determination of Spacecraft Using Time-of-Flight Sensors?

How to use ToF sensors for pose estimation with regular geometry reflector markers? 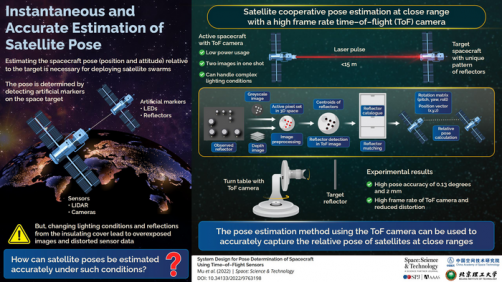 Newswise — Spacecraft pose determination is aimed at acquiring the relative pose of the active spacecraft like nanosatellites to the target. The target pose is identified by six parameters representing the translation and rotation of the relative motion. It is fundamental information in the filtering scheme of relative navigation, determining the relative state between the chaser and target. Spacecraft pose determination is essential in many mission scenarios. For example, the pose determination between nanosatellites and the cooperative spacecraft is essential for swarm in-orbit services. ToF cameras with anti-interference, automatic illumination and low power consumption are increasingly applicable to cooperative target pose estimation. In a research paper recently published in Space: Science & Technology, Shuang Li, from Advanced Space Technology Laboratory, College of Astronautics, Nanjing University of Aeronautics and Astronautics, developed the pose determination of cooperative spacecraft using a ToF camera, which means that a nanosatellite with a ToF camera as the chaser performs relative navigation to the target spacecraft equipped with cooperative reflector markers.

First of all, the author developed an embedded system was designed based on the ToF camera. The hardware system is composed of an embedded ToF module, a power supply system, a cooperative target, and an upper computer. The designed ToF camera uses eight 850nm lasers as the driving light source to detect the target at a farther distance. The ToF camera contains grayscale and depth modes. The ToF system software consists of embedded server software and upper-computer client application software. The embedded server software runs on the Linux operating system of the embedded ToF. It completes hardware initialization, raw depth data, and grayscale data processing receiving and responding to client. Hardware working parameter settings, depth, and grayscale image data can transfer request and output functions. The embedded server software is the running interface, and the device runs automatically when powered on. The client application software system is performed by a customized version QT5.9.4 implemented in C++, including the drivers for gray and deep image acquisition, processing, target detection, and pose solutions. In the working mode, the ToF camera transmits the grayscale and depth maps to the upper computer alternately. After obtaining image data, the pose determination algorithm outputs the pose. The algorithm consists of three steps, i.e. reflector detection, reflector matching and pose calculation.

Afterwards, the author introduced the cooperative reflector extraction method, including three components. Reflector markers on the cooperative targets are made of special reflective materials so that the reflecting intensity is higher than the background. Thus, the first component is to use the gray threshold and filtering intensity threshold to segment the gray image twice, and the region where the reflector markers are located is defined as the active pixel set. The second component is to find the candidate reflector blobs in a single preprocessed ToF image. The contiguous blobs of the preprocessed image are searched through using three criteria. The third component is confirming the detected reflector blobs. Although the detection method based on morphology is simple, it risks missing detection. When the detected number of marks does not match the designed number, the ellipse detection method is adopted to confirm and supplement because of the marks are designed as circular. Generally speaking, ellipse detection comprises three steps: edge segments, line segments, and ellipse. The final component is to compute candidate reflector centroids. Then, the author analyzed the feature matching approach, which involves the derivation of the matching sets, the deterministic annealing algorithm and the algorithm implementation. Moreover, after obtain the feature information, the pose estimation method based on singular value decomposition was introduced.

Then, the author conducted experiments to verify the feasibility of the ToF camera for rendezvous and docking. The experimental system consisted of a three-axis turntable, a ToF camera, a target, and a software. First, the effectiveness of the detection method was verified based on the two groups of reflector markers. Then, the stability of the system was tested by using two groups of typical distance settings. There were two main difficulties, one of which was that the pitch and yaw angles were highly coupled due to uncoaxial imaging ToF with the turntable. On the other hand, the ToF and target plane parallel calibration had effects on the measurement results. According to the simulation results, the modified attitude calculation algorithm could eliminate the couple and guarantee the accuracy and stability of the results. Besides, the difference between the ToF’s measured values and that of the turntable indicated that the results in the all axis direction were of high accuracy. Based on the experimental analyses, the error of the original data collected by the ToF was small and the target detection and pose estimation results were accurate and effective.

Finally, the author analyzed two future research direction. On one hand, the self-designed ToF was applicable in a closer range, and its measuring range should be extended for more applications. On the other hand, the algorithm only considered a simple structure of reflectors on the target, so the proposed scheme with a complex structure and configuration reflectors should be explored.

All Journal News Aviation and Aeronautics Space and Astronomy Technology