How to Curb Discharge of the Most Potent Greenhouse Gas: A 50 Percent Reduction in Meat Consumption and Emissions Is Needed 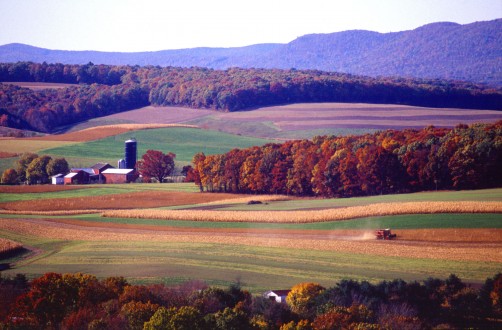 A combine harvester works through a field in the northeastern USA. Farming relies heavily on fertilizer use. 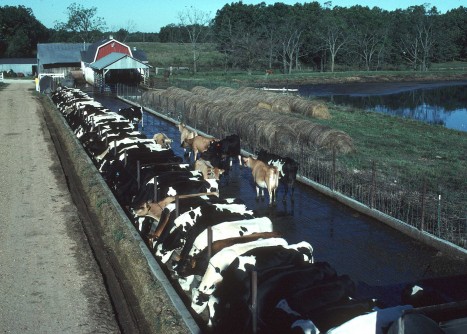 Confined cattle feeding results in an excess of nitrogen in the environment.

Newswise — Meat consumption in the developed world needs to be cut by 50 percent per person by 2050, and emissions in all sectors – industrial and agricultural – need to be reduced by 50 percent if we are to meet the most aggressive strategy, set out by the Intergovernmental Panel on Climate Change (IPCC), to reduce the most potent of greenhouse gases, nitrous oxide (N2O).

The findings are results of a study by Dr. Eric Davidson and are published today in IOP Publishing’s Environmental Research Letters. Dr. Davidson, who is President and a Senior Scientist at the Woods Hold Research Center in Massachusetts, demonstrates the magnitude of changes needed to stabilize N2O concentrations in the atmosphere.

N2O is the third highest contributor to climate change behind carbon dioxide (CO2) and methane (CH4); however, it poses a greater challenge for mitigation since nitrogen is an essential element for food production. It is also the most potent of these three greenhouse gases, as it is a much better absorber of infrared radiation. But total anthropogenic emissions are about 6 million metric tons of nitrogen as N2O, compared to 10 billion metric tons of carbon as CO2.

The main sources of N2O in the atmosphere are due to the spreading of synthetic nitrogen fertilizers onto agricultural soils and the use and storage of livestock manure. The nitrogen contained in fertilizers and manure is broken down by microbes that live in the soil and released into the atmosphere as N2O. In order to reduce emissions, it will be necessary to apply certain changes to the food production process.

Dr. Davidson believes that this can be achieved through improved management of fertilizer and manure sources, as well as through reduction of the developed world’s per capita meat consumption that will relieve pressure on fertilizer demand and reduce growth in the amount of manure being produced. “We have the technical know-how and the tools to greatly improve efficiencies of fertilizer use in agriculture,” states Davidson, “although several economic and political impediments often stand in the way of their adoption.”

In a draft of the IPCC's Fifth Assessment Report, four scenarios, known as representative concentration pathways (RCPs), have been adopted, and these represent possible means of reductions for a number of greenhouse gases. Dr. Davidson evaluated the scale of changes needed to meet the predicted N2O pathways.

Three of the IPCC’s less aggressive scenarios could be met by reducing meat consumption, improving agricultural practices, or reducing emissions from industry. The most aggressive scenario, where atmospheric N2O concentrations stabilize by 2050, can only be met if a 50 percent reduction, or improvement, is achieved for each of the above.

Assessing the likelihood of reducing meat consumption in the developed world by 50 percent, Davidson said, “If you had asked me 30 years ago if smoking would be banned in bars, I would have laughed and said that would be impossible in my lifetime, and yet it has come true. Similarly, there would be beneficial health benefits for most Americans and western Europeans to stop ‘supersizing’ and rather to reduce portion sizes of red meat.”

Are such changes possible for diet? “That will depend,” says Davidson, “not only on education about diet, but also on prices of meat. Some agricultural economists think that the price of meat is going to go way up, so that per capita consumption will go down, but those are highly uncertain projections.”

The Woods Hole Research Center (WHRC) is a private, non-profit research organization focusing on environmental sciences. Our scientists combine analysis of satellite images of the Earth with field studies to measure, model, and map changes in the world’s ecosystems, from the thawing permafrost in the Arctic to the expanding agriculture regions of the tropics. We work locally and regionally, with in-depth expertise and collaborations in North and South America and Africa; and we also work globally, focusing on how humans are changing global cycles of carbon, nitrogen, and water. We merge natural science with economics to discover sustainable paths for human prosperity and stewardship of the Earth’s natural resources.