How Will an on-Demand Economy Work?

As Uber, Airbnb, and others grow, answering questions about employment and benefits becomes urgent 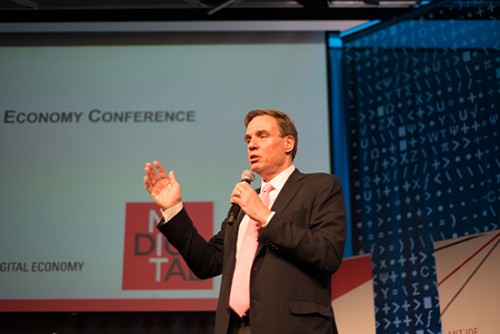 Newswise — It’s time for a new social contract, one built for a time when Americans hold down more than one job, often as independent contractors, selling their labor and skills à la carte.

That much was agreed upon at the On-Demand Economy conference, held March 15 at the MIT Media Lab.

The details of the contract? That’s yet to be determined.

“How do we allow the innovation [of the on-demand economy], but also recognize that we’ve got to maintain consumer protections and we’ve got to make sure that workers are treated fairly?” Sen. Mark Warner asked at the event, which was hosted by the MIT Initiative on the Digital Economy and the Institute for Work and Employment Research.

In the on-demand economy, the still-emerging economic model built on the rental or sharing of assets and labor (think Uber, Airbnb, and Amazon Mechanical Turk), individuals are finding new ways to make a living. But accompanied by and perhaps precipitated by America’s rising wealth inequality, these companies have thrown 20th-century notions of work, employment, and income into disarray.

A responsibility for government

In the on-demand economy, anyone can be their own boss, choose their own hours, and pick their own projects and jobs. In theory, anyway. What workers might gain in freedom and flexibility is balanced against a lack of job security and myriad unknowns about taxes, health care, retirement, and unemployment.

“When you choose when to work, the whole notion of unemployment insurance or vacation time is a foreign concept,” Warner said. He proposed partnerships between business and government to “reimagine a whole new social contract,” while calling for better data from the private sector and education for policymakers.

Warner also said the government needs to help dispel fears of litigation for on-demand economy startups, at least on a trial basis, to allow innovation to flourish. The question of whether Uber drivers are employees or independent contractors, for example, could make or break the company. Airbnb has come under fire from municipalities and neighborhood groups.

Warner also said government should work with financial technology companies to imagine how employment benefits could work in an economy full of temporary workers and freelancers. Income smoothing came up more than once during the conference. So did emergency funds. Warner said he believes Congress can make progress there, saying that even the most conservative members understand that too many people without a safety net is a “classic free rider problem.”

A sense of urgency

Labor markets are changing fast. Jonas Prising, CEO and chairman of staffing firm ManpowerGroup, said trends of the last decade include seeing more older people seeking work and workers having more say in how they interact with the workplace, whether that be in pay or in when they work.

Technology, Prising said, has caused emerging markets to grow rapidly and labor markets to change quickly to complement those markets. That’s good news, he said, because the world is “on the precipice of major growth.” But it’s bad news in that it exacerbates the divide between workers with skills and training and those without.

A conference panel focused on the role for labor movements in the on-demand economy reiterated the need for training and repeated the open questions about employment security and benefits.

“We need as much innovation in labor institutions and social contract institutions as we do in the rest of economy,” said David Rolf, president of Service Employees International Union 775. Rolf proposed the creation of centralized, private sector, worker-led not-for-profits that would manage benefit pools paid into by employers based on payroll size.

“We can’t obviously go back—we know that—to the old days,” Kochan said. “We’ve got to find a new way to meet our expectations and obligations.”