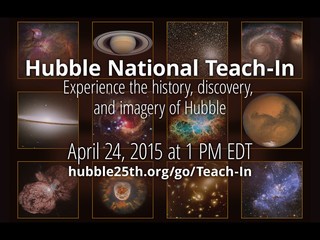 April 24, 2015, marks the 25th anniversary of the launch of the Hubble Space Telescope. You can participate in this celestial silver celebration right in your classroom! Join the Hubble National Teach-In sponsored by the Space Telescope Science Institute in Baltimore, Maryland at 1pm EDT on Fri., April 24. To join the teach-in visit http://hubble25th.org/education/24.

Newswise — This Friday, April 24, at 1:00 p.m. Eastern Daylight Time (EDT) classrooms across the nation -- from elementary school level to high school -- will be able to participate in the Hubble Space Telescope's 25th launch anniversary in a national "teach-in" sponsored by the Space Telescope Science Institute in Baltimore, Maryland.

NASA Administrator Charles Bolden will welcome the educational community to the teach-in. "I applaud the teach-in for helping to inspire the next generation of scientists and engineers who may someday work on their own great observatory and once again transform humanity's understanding of their place in the universe," he said.

Hubble educators and astronomers will provide an online exploration of the remarkable history of the space telescope in transforming our view of the universe, and take a look ahead to Hubble's promising future.

Students will learn about some of Hubble's remarkable scientific achievements and explore some of the most evocative images ever made of the universe.

Students will be able to pose questions to be addressed during the event, analyze a section of one of Hubble's most important images, and see the results of an educational activity that uses Hubble data to estimate the number of galaxies in the universe.

The featured speaker will be Frank Summers, outreach astronomer at the Space Telescope Science Institute. Dr. Summers has worked on Hubble education and outreach for 14 years.

The teach-in can be watched on YouTube at https://www.youtube.com/watch?v=XHD1pR4Ma1w .

For detailed information on how to participate in the event, visit http://hubble25th.org/go/Teach-In .