This video displays the rotation of comet C/2020 F3 (NEOWISE) shortly after its pass by the Sun. The two images were taken 3 hours apart on August 8, 2020. Two jets emerging from the comet’s nucleus are being fanned out by the comet’s rotation. 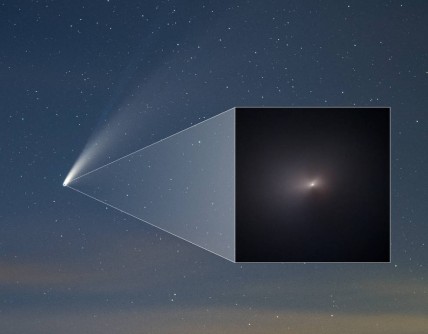 This ground-based image of comet C/2020 F3 (NEOWISE) was taken from the Northern Hemisphere on July 16, 2020. The inset image, taken by the Hubble Space Telescope on August 8, 2020, reveals a close-up of the comet after its pass by the Sun. Hubble’s image zeroes in on the comet’s nucleus, which is too small to be seen. It’s estimated to measure no more than 3 miles (4.8 kilometers) across. Instead, the image shows a portion of the comet’s coma, the fuzzy glow, which measures about 11,000 miles (18,000 kilometers) across in this image. Comet NEOWISE won’t pass through the inner solar system for another nearly 7,000 years. 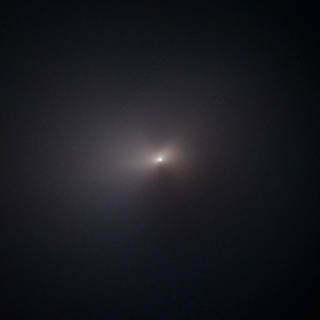 This image of comet C/2020 F3 (NEOWISE) was taken by the Hubble Space Telescope on August 8, 2020. Hubble’s image represents the first time a comet of this brightness has been photographed at such resolution after this close of a pass by the Sun. The two structures appearing on the left and right sides of the comet’s center are jets made up of ice sublimating from beneath the surface of the nucleus, with the resulting dust and gas being squeezed through at a high velocity. The jets emerge as cone-like structures, then are fanned out by the rotation of comet NEOWISE’s nucleus.

Newswise — NASA Hubble Space Telescope images of comet NEOWISE, taken on August 8, zero in on the visitor’s coma, the gossamer shell of gas and dust that surrounds its nucleus as it is heated by the Sun. This is the first time Hubble has photographed a comet of this brightness at such resolution after this close of a pass by the Sun.

Comet photos were taken after NEOWISE skimmed closest to the sun on July 3, 2020, at a distance of 27 million miles (43 million kilometers). Other comets often break apart due to thermal and gravitational stresses at such close encounters, but Hubble’s view shows that apparently NEOWISE’s solid nucleus stayed intact.

“Hubble has far better resolution than we can get with any other telescope of this comet,” said lead researcher Qicheng Zhang of Caltech in Pasadena, California. “That resolution is very key for seeing details very close to the nucleus. It lets us see changes in the dust right after it’s stripped from that nucleus due to solar heat, sampling dust as close to the original properties of the comet as possible.”

The heart of the comet, its icy nucleus, is too small to be seen by Hubble. The ball of ice may be no more than 3 miles (4.8 kilometers) across. Instead, the Hubble image captures a portion of the vast cloud of gas and dust enveloping the nucleus, which measures about 11,000 miles (18,000 kilometers) across in this photo. Hubble resolves a pair of jets from the nucleus shooting out in opposite directions. They emerge from the nucleus as cones of dust and gas, and then are curved into broader fan-like structures by the rotation of the nucleus. Jets are the result of ice sublimating beneath the surface with the resulting dust/gas being squeezed out at high velocity.

The Hubble photos may help reveal the color of the comet’s dust and how those colors change as the comet moves away from the Sun. This, in turn, may explain how solar heat affects the composition and structure of that dust in the comet’s coma. The ultimate goal here would be to learn the original properties of the dust to learn more about the conditions of the early solar system in which it formed.

Comet NEOWISE is considered the brightest visible from the Northern Hemisphere since 1997’s Hale-Bopp. It’s headed beyond the outer solar system, now traveling at a whopping 144,000 miles per hour. It will not return to the Sun for another nearly 7,000 years.

Researchers are currently delving more into the data to see what they’re able to confirm.

NASA’s Near-Earth Object Wide-field Infrared Survey Explorer (NEOWISE) mission first discovered its namesake comet in March 2020. As the comet made its way closer to the Sun, searing heat melted its ices, unleashing dust and gas that leaves the signature tails. Throughout the summer, ground-based sky watchers in the Northern Hemisphere were able to catch a view of the traveler moving across the sky.

The Hubble Space Telescope is a project of international cooperation between NASA and ESA (European Space Agency). NASA’s Goddard Space Flight Center in Greenbelt, Maryland, manages the telescope. The Space Telescope Science Institute (STScI) in Baltimore, Maryland, conducts Hubble science operations. STScI is operated for NASA by the Association of Universities for Research in Astronomy in Washington, D.C.