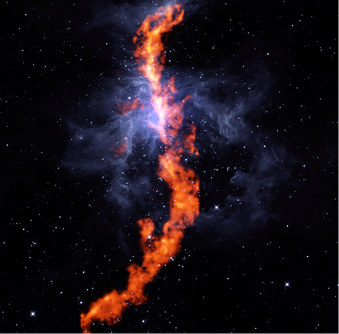 A ribbon of ammonia -- a tracer of star-forming gas -- in the Orion Nebula as seen with the GBT (orange). Background image in blue is a WISE telescope infrared image showing the dust in the region.

Newswise — A team of astronomers has unveiled a striking new image of the Orion Molecular Cloud (OMC) – a bustling stellar nursery teeming with bright, young stars and dazzling regions of hot, glowing gas.

The researchers used the National Science Foundation’s (NSF) Green Bank Telescope (GBT) in West Virginia to study a 50 light-year long filament of star-forming gas that is wending its way through the northern portion of the OMC known as Orion A.

The GBT rendered this image by detecting the faint radio signals naturally emitted by molecules of ammonia that suffuse interstellar clouds. Scientists study these molecules to trace the motion and temperature of vast swaths of star-forming gas.

These observations are part of the first data release from a large campaign known as the Green Bank Ammonia Survey. Its purpose is to map all of the star-forming ammonia and other key tracer molecules in a massive structure known as the Gould Belt.

The Gould Belt is an extended ribbon of bright, massive stars stretching about 3,000 light-years in an arc across the sky.  This first release covers four distinct Gould Belt clouds, one located in Taurus, one in Perseus, one in Ophiuchus, and Orion A North in Orion.

“We hope to use these data to understand better how large clouds of gas in our galaxy collapse to form new stars,” said Rachel Friesen, one of the collaboration’s co-principal investigators and, until 31 May 2017, a Dunlap Fellow at the Dunlap Institute for Astronomy and Astrophysics at the University of Toronto in Canada. “The new data are critical to assessing whether certain gas clouds and filaments are stable and enduring features or if they are undergoing collapse and forming new stars.”

Prior ammonia observations by many of the survey’s co-authors have targeted smaller portions of similar star-forming clouds. In these individual studies, the researchers identified sharp transitions in the amount of turbulence between the larger cloud and the smaller-scale star-forming cores, studied the stability against gravitational collapse of the gas within a young protocluster, and investigated how mass builds up along gas filaments and flows into stellar cluster-forming regions.

"These data provide a unique view of the cold dense gas involved in forming stars like our sun," said Jaime E. Pineda, the collaboration's other co-principal investigator, with the Max-Planck Institute for Extraterrestrial Physics in Garching, Germany. "We hope they can also help us determine how much rotation is present in the regions that will form stars; this is crucial to understand how protoplanetary disks are formed."

The new GBT image is combined with an infrared one taken with NASA’s Wide-field Infrared Survey Explorer (WISE) telescope. The composite image illustrates how star-forming gas in this region relates to the bright stars and dark, dusty regions of the nebula.

The 100-meter GBT, which is located in the National Radio Quiet Zone, is exquisitely sensitive and uniquely able to study the molecular composition of star-forming clouds and other objects in the cosmos. Future observations of the Gould Belt will provide greater insights into the conditions that give rise to stars like our sun and planets like Earth.

The Green Bank Observatory (GBO) is a facility of the National Science Foundation operated under a cooperative agreement by Associated Universities, Inc.