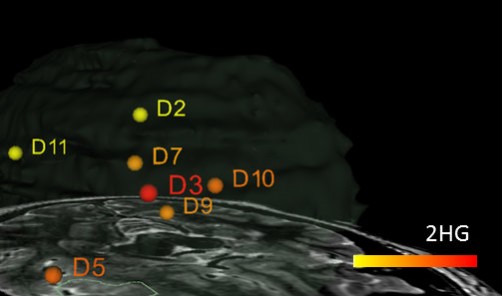 Superimposed on an MRI image of the tumor the DESI-MS system shows areas clear of tumor (D11 and D2) as well as the main tumor region with a high level of the tumor metabolite 2-HG (D3.) 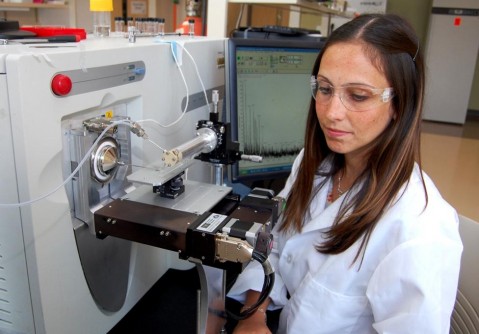 Newswise — During tumor surgery, surgeons work to remove tumor tissue without damaging surrounding healthy tissue. This is particularly critical when removing brain gliomas, as damage to adjacent healthy brain tissue can have significant effects on a patient’s neural function. On the other hand, if cancerous tissue is not completely removed, the tumor may grow back. To address these issues, NIBIB-funded researchers have developed an imaging system that rapidly and accurately detects a molecular marker found in brain gliomas. It promises to improve the precision of these difficult surgeries by enabling the complete removal of the tumor, while reducing residual damage to brain tissue and neural function.

The imaging system is known as desorption electrospray ionization mass spectrometry (DESI MS). The technique was developed by R. Graham Cooks, Ph.D., at Purdue University, and the brain study was done with collaborators at Harvard Medical School and Dana Farber Cancer Institute, and is described in the June 30 issue of the Proceedings of the National Academies of Science. DESI MS promises to be a significant improvement over the current method of distinguishing brain tumor tissue from healthy tissue, which relies on an extremely lengthy and difficult procedure for surgeons and patients.

The current protocol uses frozen section pathology, which involves removing suspected tumor tissue and having it analyzed by pathologists. They use a freezing and staining method that takes about 20 minutes and is too slow to be repeated multiple times during surgery. This method, developed more than 150 years ago, is both inefficient and lacks precision. It can result in incomplete tumor removal and regrowth, as well as inadvertent damage to healthy tissue, which can cause significant deficits in functioning for patients.

The new technique solves some of the problems of the current method. Researchers use the ability of mass spectrometry to identify metabolites that are present in brain tumors, but not in healthy tissue. As surgery progresses, tissue samples are removed and sprayed with a charged liquid that splashes onto the surface of the tissue, lifting off droplets; the droplets are then sucked into a mass spectrometer, where the mass and charge of the metabolites are measured. Brain gliomas produce large amounts of a tumor metabolite, 2-hydroxyglutarate (2-HG), which is captured in the droplets. This very rapid, objective method allows for clear delineation of tumor versus non-tumor tissue, so surgeons can remove all, and only, tumor tissue. The DESI MS system was first tested on glioma specimens from 35 patients. Twenty one of the 35 samples contained high levels of 2-HG, a product of the mutant form of a gene known as IDH, which is associated with tumor formation. The results clearly demonstrated that DESI MS can detect 2-HG in tumor tissue with very high sensitivity and specificity.

The researchers went on to test the system in an operating room. The group installed a complete DESI MS system in the Advanced Multimodality Image Guided Operating (AMIGO) suite at Brigham and Women’s Hospital that is a part of the National Center for Image-Guided Therapy. The AMIGO surgical suite is an operating room with built-in imaging devices such as MRI, so the surgeon can use it to map the tumor pre-operatively. Tissue sections from tumors from two patients were examined using DESI MS. In both cases, the post-operative analysis confirmed that intraoperative DESI MS had accurately detected the presence of 2-HG in each tumor.

The researchers chose detection of 2-HG to test the DESI MS system because about 80% of gliomas and glioblastomas are associated with mutations in the IDH gene, which results in high levels of 2-HG. The approach described here could be applicable to the resection of all 2-HG-producing tumors. Gliomas are tumors of brain glial cells and account for the majority of malignant brain tumors in adults. Gliomas make up approximately 30% of all brain and central nervous system tumors and 80% of all malignant brain tumors. These experiments provide proof-of-concept of the accuracy and practicality of the DESI MS system, and suggest that the system can be used with this common 2-HG-producing tumor, as well as other tumors in which a metabolic marker of malignancy is produced. The DESI MS system was shown to be extremely accurate and was easily adapted for use in the clinical setting. It does not have the limitations of MRI, which cannot provide information about the type of tumor, and requires that surgery be halted for an hour or longer for scanning and interpretation of results. Moreover, each operating room that contains an MRI machine costs more than $10 million. In contrast, DESI MS platforms could be set up in any operating room at a very small fraction of the cost. The DESI MS system promises to be a powerful new tool for both research and clinical applications with the potential to transform surgical care of patients with brain tumors and other solid tumors. 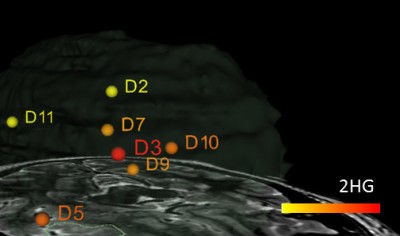 Caption: Superimposed on an MRI image of the tumor the DESI-MS system shows areas clear of tumor (D11 and D2) as well as the main tumor region with a high level of the tumor metabolite 2-HG (D3.) 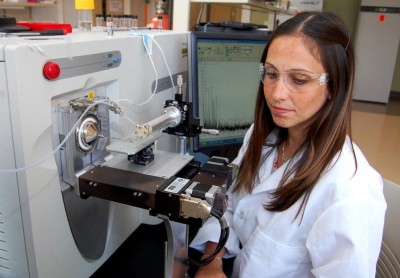