PD-1 inhibitor is safe, shrank tumors or stabilized disease in most patients 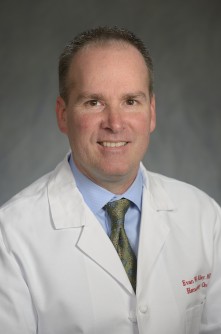 Newswise — PHILADELPHIA –The PD-1 inhibitor pembrolizumab, a cancer immunotherapy drug, shrank or halted growth of tumors in 76 percent of patients with pleural mesothelioma, a rare and deadly form of cancer that arises in the outer lining of the lungs and internal chest wall, according to a new study from researchers in the Perelman School of Medicine at the University of Pennsylvania. Patients diagnosed with the disease, which is tied to exposure to asbestos, have a median survival rate of about one year.

The findings will be presented on Sunday at the 2015 American Association for Cancer Research (AACR) Annual Meeting, being held in Philadelphia April 18-22.

An international team of scientists from the United States, Europe, and the United Kingdom led by Evan W. Alley, MD, PhD, co-director of the Penn Mesothelioma and Pleural Program, found that of 25 patients administered the medication, seven (28 percent) experienced tumor shrinkage and the drug appeared to halt tumor growth in 12 patients (48 percent) . Four patients (16 percent) had disease that progressed, and two patients had not been assessed at the time of analysis. No patients discontinued treatment because of serious drug-related adverse events.

“The 76 percent disease control rate in this set of patients previously treated for malignant pleural mesothelioma is very promising and represents a signal of efficacy in the treatment of this disease,” said Alley. “Our team was also gratified that none of our patients had unexpected side effects, there were no patient deaths related to the treatment, and we managed all adverse events without discontinuing treatment.” All of the patients in the study had disease that had progressed despite receiving standard or first-line therapy, or were unable to receive such therapy. There are no FDA-approved treatments for malignant pleural mesothelioma that has progressed after standard therapy; response rates to second-line chemotherapy are usually less than 10 percent.

Pembrolizumab was approved by the FDA in September 2014 to treat metastatic melanoma. The medication targets programmed cell death protein 1, also known as PD-1. The latter helps regulate the immune system by preventing the activation of T-cells, which belong to a group of white blood cells called lymphocytes that protect the body from infection. This serves to prevent autoimmune diseases, in which the body produces antibodies that attack its own tissue. But protection from autoimmune disease can mean that there are inadequate T-cells to fight cancer and other diseases. Pembrolizumab is a member of a new class of drugs called the PD-1 inhibitors, which block PD-1, thereby activating the immune system to attack tumors.

“This study has provided an early glimpse of the potential benefits of using pembrolizumab in patients with malignant pleural mesothelioma,” said Alley. “More research and trials will be occurring, which we hope will provide further grounds for optimism.”

This study was funded by Merck, which makes pembrolizumab.

# # # Penn Medicine is one of the world's leading academic medical centers, dedicated to the related missions of medical education, biomedical research, and excellence in patient care. Penn Medicine consists of the Raymond and Ruth Perelman School of Medicine at the University of Pennsylvania (founded in 1765 as the nation's first medical school) and the University of Pennsylvania Health System, which together form a $4.9 billion enterprise.