Newswise — Astronomers using NASA's Hubble Space Telescope are finding that planets have a tough time forming in the rough-and-tumble central region of the massive, crowded star cluster Westerlund 2. Located 20,000 light-years away, Westerlund 2 is a unique laboratory to study stellar evolutionary processes because it's relatively nearby, quite young, and contains a large stellar population.

A three-year Hubble study of stars in Westerlund 2 revealed that the precursors to planet-forming disks encircling stars near the cluster's center are mysteriously devoid of large, dense clouds of dust that in a few million years could become planets.

However, the observations show that stars on the cluster's periphery do have the immense planet-forming dust clouds embedded in their disks. Researchers think our solar system followed this recipe when it formed 4.6 billion years ago.

So why do some stars in Westerlund 2 have a difficult time forming planets while others do not? It seems that planet formation depends on location, location, location. The most massive and brightest stars in the cluster congregate in the core, which is verified by observations of other star-forming regions. The cluster's center contains at least 30 extremely massive stars, some weighing up to 80 times the mass of the Sun. Their blistering ultraviolet radiation and hurricane-like stellar winds of charged particles blowtorch disks around neighboring lower-mass stars, dispersing the giant dust clouds.

"Basically, if you have monster stars, their energy is going to alter the properties of the disks around nearby, less massive stars," explained Elena Sabbi, of the Space Telescope Science Institute in Baltimore, Maryland, lead researcher of the Hubble study. "You may still have a disk, but the stars change the composition of the dust in the disks, so it's harder to create stable structures that will eventually lead to planets. We think the dust either evaporates away in 1 million years, or it changes in composition and size so dramatically that planets don't have the building blocks to form."

The Hubble observations represent the first time that astronomers analyzed an extremely dense star cluster to study which environments are favorable to planet formation. Scientists, however, are still debating whether bulky stars are born in the center or whether they migrate there. Westerlund 2 already has massive stars in its core, even though it is a comparatively young 2-million-year-old system.

Using Hubble's Wide Field Camera 3, the researchers found that of the nearly 5,000 stars in Westerlund 2 with masses between 0.1 to 5 times the Sun's mass, 1,500 of them show fluctuations in their light as the stars accrete material from their disks. Orbiting material clumped within the disk would temporarily block some of the starlight, causing brightness fluctuations.

However, Hubble detected the signature of such orbiting material only around stars outside the cluster's packed central region. The telescope witnessed large drops in brightness for as much as 10 to 20 days around 5% of the stars before they returned to normal brightness. They did not detect these dips in brightness in stars residing within four light-years of the center. These fluctuations could be caused by large clumps of dust passing in front of the star. The clumps would be in a disk tilted nearly edge-on to the view from Earth. "We think they are planetesimals or structures in formation," Sabbi explained. "These could be the seeds that eventually lead to planets in more evolved systems. These are the systems we don't see close to very massive stars. We see them only in systems outside the center."

Thanks to Hubble, astronomers can now see how stars are accreting in environments that are like the early universe, where clusters were dominated by monster stars. So far, the best known nearby stellar environment that contains massive stars is the starbirth region in the Orion Nebula. However, Westerlund 2 is a richer target because of its larger stellar population.

"Hubble's observations of Westerlund 2 give us a much better sense of how stars of different masses change over time, and how powerful winds and radiation from very massive stars affect nearby lower-mass stars and their disks," Sabbi said. "We see, for example, that lower-mass stars, like our Sun, that are near extremely massive stars in the cluster still have disks and still can accrete material as they grow. But the structure of their disks (and thus their planet-forming capability) seems to be very different from that of disks around stars forming in a calmer environment farther away from the cluster core. This information is important for building models of planet formation and stellar evolution."

This cluster will be an excellent laboratory for follow-up observations with NASA's upcoming James Webb Space Telescope, an infrared observatory. Hubble has helped astronomers identify the stars that have possible planetary structures. With Webb, researchers can study which disks around stars are not accreting material and which disks still have material that could build up into planets. This information on 1,500 stars will allow astronomers to map a path on how star systems grow and evolve. Webb also can study the chemistry of the disks in different evolutionary phases and watch how they change, and help astronomers determine what influence environment plays in their evolution.

NASA's planned infrared observatory, the Nancy Grace Roman Space Telescope, will be able to perform Sabbi's study on a much larger area. Westerlund 2 is just a small slice of an immense star-formation region. These vast regions contain clusters of stars with different ages and different densities. Astronomers could use Roman Space Telescope observations to start to build up statistics on how a star's characteristics, like its mass or outflows, affect its own evolution or the nature of stars that form nearby. The observations could also provide more information on how planets form in tough environments.

For images and more information about the study and Hubble, visit:

Caption: CELESTIAL FIREWORKS IN WESTERLUND 2. The brilliant tapestry of young stars flaring to life resemble a glittering fireworks display in this Hubble Space Telescope archival image. The sparkling centerpiece of this fireworks show is a giant cluster of thousands of stars called Westerlund 2. The cluster resides in a raucous stellar breeding ground known as Gum 29, located 20,000 light-years away from Earth in the constellation Carina. Hubble's Wide Field Camera 3 pierced through the dusty veil shrouding the stellar nursery in near-infrared light, giving astronomers a clear view of the nebula and the dense concentration of stars in the central cluster. The cluster measures between 6 light-years and 13 light-years across. The giant stellar grouping is only about 2 million years old and contains some of our Milky Way galaxy's hottest, brightest, and most massive stars. Some of its heftiest stars unleash torrents of ultraviolet light and hurricane-force winds of charged particles that etch away the enveloping hydrogen gas cloud. New Hubble observations are showing that lower-mass stars near the cluster's core do not have the large, dense clouds of dust that eventually could become planets in a few million years. Hubble detected those planet-forming clouds embedded in disks encircling lower-mass stars farther away from the center. The nebula reveals a landscape of pillars, ridges, and valleys. The pillars, composed of dense gas and thought to be incubators for new stars, are a few light-years tall and point to the central star cluster. Other dense regions surround the pillars, including reddish-brown filaments of gas and dust. The red dots scattered throughout the landscape are a rich population of newly forming stars still wrapped in their gas-and-dust cocoons. The brilliant blue stars seen throughout the image are mostly foreground stars. The image's central region, which contains the star cluster, blends visible-light data taken by Hubble's Advanced Camera for Surveys with near-infrared exposures taken by the Wide Field Camera 3. The surrounding region is composed of visible-light observations taken by the Advanced Camera for Surveys. The red colors in the nebulosity represent hydrogen; the bluish-green hues are predominantly oxygen. 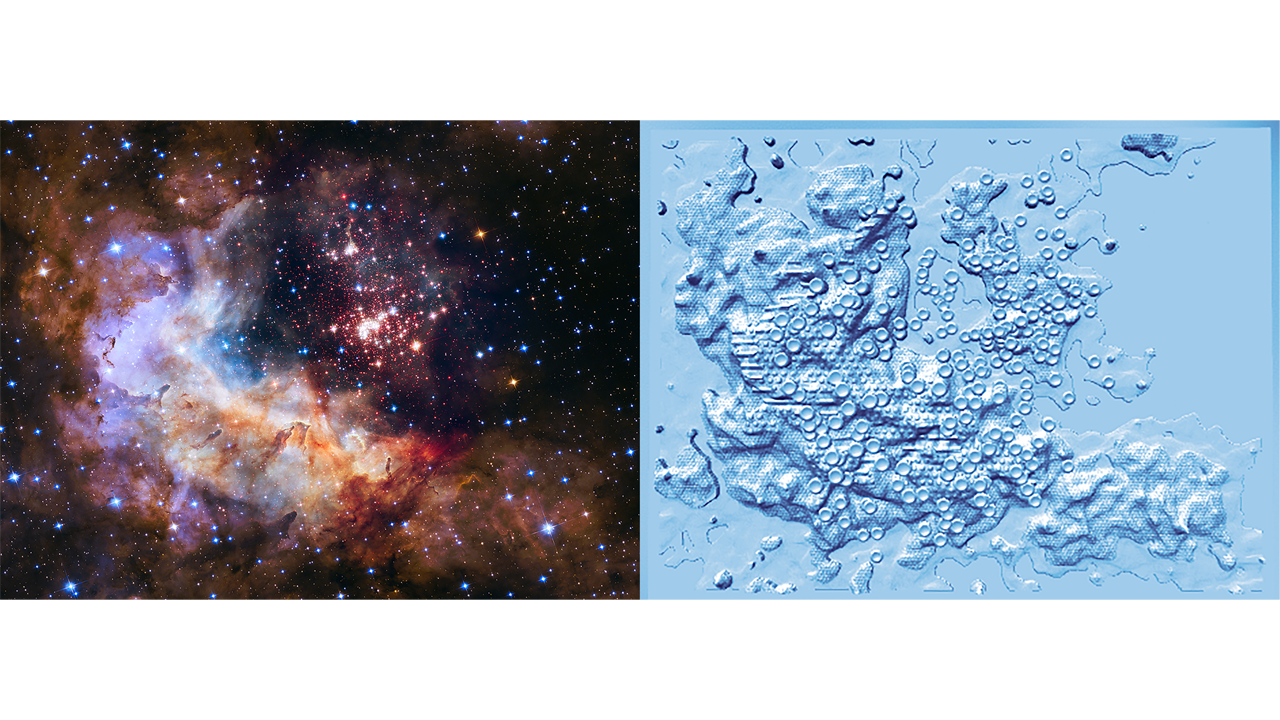 Caption: This illustration shows the Westerlund 2 image and the 3D tactile print derived from the Hubble Space Telescope data. The tactile print was provided by the 3D Astronomy Project at STScI which makes star cluster and galaxy imagery available in 3D tactile representations outfitted with textures to distinguish specific features in the celestial object. The 3D prints are produced through an innovative process [Christian et al. 2015, Grice et al. 2015] for the star clusters Westerlund 2 [Zeidler 2015], NGC 602 and others as well as several LEGUS galaxies. The purpose is to stimulate an understanding of and interest in astronomical phenomena for any person, but especially persons with blindness or visual impairment (B/VI) and individuals who are tactile learners. 3D Astronomy does address the need for assistive materials for individuals with B/VI in particular. 3D prints of Hubble astronomical data are produced using the research analysis of the observations and transforming the science data into 3D prints. Image intensity is used as a surrogate for the mass distribution and textures are used to distinguish various features in the astronomical objects. Customarily, in visualization images, intensity and colors are used to highlight the astrophysics and so intensity and color are transformed into print "elevation" and colors into textures. For a star cluster such as Westerlund 2, a "2.5 D" image is produced considering that much of a star cluster's central region can be tenuous gas, which is difficult to print, as structure holding the stars in place are difficult to interpret for visually impaired individuals. Print files in STL format from 3D Astronomy are released periodically.