Ingredient in Prozac Increases Risk of Extinction for Freshwater Mussels 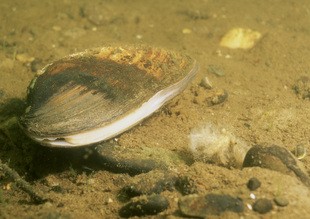 Newswise — You'd think in a river filled with anti-depressants, freshwater mussels would be, well, happy as clams. Far from it. In fact, a new laboratory study suggests that exposure to Prozac can disrupt the reproductive cycle of these mollusks, potentially increasing their risk of extinction.

The study, one of the first to examine the ecotoxicological effects of Prozac (fluoxetine) on native freshwater mussels, found that the drug caused females to prematurely release their larvae, essentially dooming them. The findings were presented today at the 232nd national meeting of the American Chemical Society, the world's largest scientific society.

"The results from this study were quite alarming," said co-investigator Rebecca Heltsley, a National Research Council Post-Doctoral Fellow at the National Institute of Standards and Technology, Hollings Marine Laboratory in Charleston, S.C. "When larvae are released too early, they are not viable, which only contributes to the problems faced by struggling populations of native freshwater mussels."

About 70 percent of the nearly 300 species of freshwater mussels native to North America are extinct, endangered or declining, according to Heltsley. In the past 100 years, no other widespread North American animal group has experienced such notable collapse, she added.

"The presence of Prozac and similar drugs in U.S. rivers and streams has likely compounded the problem," Heltsley said. "It's a big concern because freshwater mussels are such an imperiled group."

Prozac, one of the nation's most prescribed anti-depressant medications, helps relieve depression by increasing the brain's supply of a neurotransmitter called serotonin. But like many prescription drugs, some remnants of Prozac ultimately are mixed into wastewater that reaches rivers and streams, Heltsley said. Recently, University of Georgia researchers who found traces of Prozac in fish and frogs concluded the drug slowed the development of these animals.

In their study, Heltsley, along with lead investigator Gregory Cope of North Carolina State University and other colleagues, placed female freshwater mussels carrying larvae into tanks containing laboratory water with varying concentrations of fluoxetine, the active ingredient in Prozac. The Prozac concentrations, which ranged from 0.3 to 3,000 micrograms per liter, mimicked those previously found in surface waters of lakes and streams. They also exposed a similar set of mussels directly to serotonin. Within 48 hours, the mussels in both groups had released their larvae prematurely.

"Protecting freshwater mussels and other aquatic life that are susceptible to the unintended consequences of exposure to pharmaceuticals in our rivers and streams will take a concentrated effort," Heltsley said. "These efforts could include the development of more efficient wastewater treatment facilities that can filter out these products before they reach our waterways."

Freshwater mussels have a key role in the ecology of rivers and streams, Heltsley emphasized. They filter large volumes of water for food each day, thereby helping filter contaminants and excessive nutrients from water and serving as an early warning of water quality problems. They also are an important source of food for muskrats, otters, fish and other animals.

Heltsley and her colleagues are evaluating surface water and sediment samples from a natural water system and will compare the results of this work with the results of their laboratory based study.

The American Chemical Society - the world's largest scientific society - is a nonprofit organization chartered by the U.S. Congress and a global leader in providing access to chemistry-related research through its multiple databases, peer-reviewed journals and scientific conferences. Its main offices are in Washington, D.C., and Columbus, Ohio.