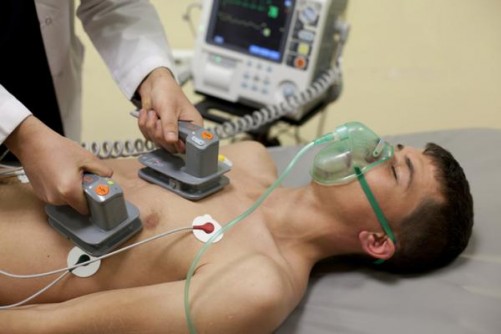 An article in Critical Care Nurse details how Orlando Health improved the timely use of defibrillation and empowered nurses to confidently respond during code events.

“Using Simulation to Improve Adherence to Get With The Guidelines Time to First Shock” details how Orlando Health, Florida, improved the timely use of defibrillation and empowered nurses to confidently respond during code events. The article is published in the December issue of Critical Care Nurse (CCN).

Time to first shock is one of four achievement metrics recognized in the American Heart Association’s Get With The Guidelines (GWTG) resuscitation program. The guidelines say hospitalized patients exhibiting ventricular fibrillation or pulseless ventricular tachycardia should receive defibrillation within two minutes to improve outcomes.

The initiative was a response to discovering that the facility was 99% compliant or perfect with three of GWTG’s four metrics in 2018, but only 42% successful with administering the first shock in a timely manner. Further analysis revealed the intensive care unit (ICU) reported the highest number of delays in time to first shock beyond the two-minute window, which is called a fallout. It also lacked a standard process for managing code events.

Data for the following year found the time to first shock metric improved to 83%, with further improvement to 100% during the first six months of 2020.

“When seconds count, it’s important for everyone to instantly know their role as part of the response team, which can change for each code situation,” she said. “This project helped our hospital improve compliance with GWTG metrics and enhance our care for patients experiencing cardiopulmonary arrests. It’s become a foundation for code simulations and mock code education throughout the hospital.”

The project began with nurses and ICU physicians collaborating to develop a diagram of a patient room that identified primary and secondary roles for specific team members and defined the number of staff needed to respond to a cardiopulmonary arrest.

A mock code simulation video was created and embedded in online education to demonstrate the proper role designations and execution displayed in the diagram.

All 40 ICU nurses were assigned to complete the new online education, which included electrocardiogram recognition and code documentation. The ICU learning specialist then worked one-on-one with individual nurses as needed.

The initiative then moved to structured code simulations, which included a presimulation discussion, three rapid-cycle simulations followed by a short debriefing, and a final conclusive debriefing at the end of the two-hour training session. The same scenario was used for each simulation, but participants were assigned to different roles, including the position of code leader, each time.

“A presimulation discussion and slow code walk-through were crucial elements to equipping participants with the knowledge to respond more appropriately during the simulation and translate that knowledge into practice,” Paddock said.

In addition to the initial evaluation survey, a postintervention questionnaire was sent three months after the simulation to assess how the training had impacted participants’ knowledge, confidence and overall clinical practice.

As the American Association of Critical-Care Nurses’ bimonthly clinical practice journal for acute and critical care nurses, CCN is a trusted source of information related to the bedside care of critically and acutely ill patients.

About Critical Care Nurse: Critical Care Nurse (CCN), a bimonthly clinical practice journal published by the American Association of Critical-Care Nurses, provides current, relevant and useful information about the bedside care of critically and acutely ill patients. The award-winning journal also offers columns on traditional and emerging issues across the spectrum of critical care, keeping critical care nurses informed on topics that affect their practice in acute, progressive and critical care settings. CCN enjoys a circulation of more than 130,000 and can be accessed at http://ccn.aacnjournals.org/.

About the American Association of Critical-Care Nurses: For more than 50 years, the American Association of Critical-Care Nurses (AACN) has been dedicated to acute and critical care nursing excellence. The organization’s vision is to create a healthcare system driven by the needs of patients and their families in which acute and critical care nurses make their optimal contribution. AACN is the world’s largest specialty nursing organization, with more than 130,000 members and over 200 chapters in the United States.