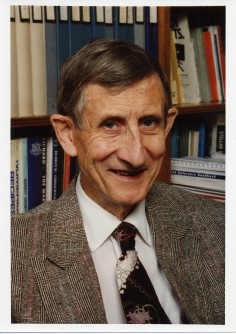 Freeman Dyson will deliver the BEYOND Annual Lecture at ASU on March 29. In his talk, titled “Living through Four Scientific Revolutions,” Dyson said he “will be telling stories about the four new technologies of space, nuclear energy, genomics and computing that all started simultaneously after the end of World War II and together changed the world.”

Newswise — TEMPE, Ariz. – Freeman Dyson, who has been variously described as a Renaissance scientist, a heretic and a storyteller, earned a Bachelor of Arts degree in mathematics from Cambridge in 1945 and six years later was named a professor at Cornell University even though he did not have a doctorate.

Much of the scientific community knows Dyson as a theoretical physicist and mathematician whose studies have included quantum electrodynamics, nuclear reactors, solid state physics, ferromagnetism, astrophysics and biology. He is a fellow of the American Physical Society, member of the U.S. National Academy of Sciences and a fellow of the Royal Society of London.

“Freeman Dyson is undoubtedly one of the intellectual giants of the 20th century. Here is a man who rubbed shoulders with the likes of Albert Einstein and Kurt Gödel, and worked with Richard Feynman to create the most successful theory in physics – quantum electrodynamics,” said Paul Davies, a theoretical physicist, cosmologist and astrobiologist at Arizona State University, where he is the founding director of the BEYOND Center for Fundamental Concepts in Science.

“But Dyson is not merely a brilliant theoretical physicist. He is one of a rare breed of scientists whose vision sweeps across the entire scientific landscape, from genetics to cosmology, from the origin of life to the destiny of mankind,” said Davies.

Dyson will deliver the annual signature lecture presented by ASU’s BEYOND Center at 7 p.m. March 29 at the Tempe Center for the Arts, 700 W. Rio Salado Parkway in Tempe. The lecture is free and open to the public. Seats are available on a first-come, first-served basis.

Titled “Living through four scientific revolutions,” Dyson said he “will be telling stories about the four new technologies of space, nuclear energy, genomics and computing that all started simultaneously after the end of World War II and together changed the world.

“I was lucky to start my scientific career just then. I was present at the creation of all of them and made modest contributions to two of them. Some of them succeeded and some failed,” he said, adding that his lecture will explore reasons for the successes and failures.

Dyson, who worked as a civilian scientist for the Royal Air Force in World War II, spent most of his career as a professor of physics at the Institute for Advanced Study, from 1953 to 1994, where he is now Professor Emeritus. Located in the city of Princeton, New Jersey, and founded in 1930, the institute is a community of scholars who are given the freedom to work on the attainment of long-term goals without pressure for immediate results. For Dyson, that meant “looking for problems where elegant mathematics could be usefully applied.”

“His imaginative ideas for spaceflight and astro-engineering have inspired a generation of engineers and science fiction writers, while his analysis of the ultimate fate of the universe and its possible inhabitants kindled an entire research program,” said Davies. “But above all, Dyson's penetrating analysis of human brilliance and human folly has made him an iconic figure in the debate about humanity's near-term and long-term future.”

Dyson’s honors tell the story of a visionary who is recognized in the humanities as well as the sciences. He was awarded the Templeton Prize for Progress in Religion in 2000 and the Lewis Thomas Prize honoring the Scientist as Poet by Rockefeller University in 1996. He also received the Enrico Fermi Award given by the U.S. Department of Energy in 1995 and the Danny Heineman Prize by the American Institute of physics in 1965.

In addition to his scientific papers, Dyson is the author of a number of books about science for the general public. “Disturbing the Universe” (1974) is a portrait-gallery of people he has known during his career as a scientist, including Feynman, Hans Bethe and J. Robert Oppenheimer. Parts of the book were published in the New Yorker and in the Observer.

His other books include “Weapons and Hope” (1984), a study of ethical problems of war and peace; “Infinite in all directions” (1988), a philosophical meditation based on Dyson’s Gifford Lectures on Natural Theology given at the University of Aberdeen in Scotland; “Origins of Life” (1986, 2nd ed 1999), a study of one of the major unsolved problems of science; and “The Sun, the Genome and the Internet: Tools of Scientific Revolutions” (1999), which discusses the question of whether modern technology could be used to narrow the gap between rich and poor, rather than widen it.

In 2006, New York Review of Books published Dyson’s “The Scientist as Rebel,” promoted as “an illuminating collection of essays by an award-winning scientist whom the London Times calls ‘one of the world’s most original minds.’”

A collection of Dyson’s lectures was published in 2007 by the University of Virginia Press under the title “A Many-colored Glass: Reflections on the Place of Life in the Universe.”

“The BEYOND annual lecture challenges one of the world’s leading intellectuals to think beyond the confines of their specialism, and to offer new insights into science, philosophy or futurology,” Davies said. Past speakers were Frank Wilczek, who won the 2004 Nobel Prize in Physics; Daniel Dennett, a philosopher propelled to international fame with his ground-breaking book “Consciousness Explained;” Richard Dawkins, a renowned evolutionary biologist and popular science writer; Murray Gell-Mann, winner of the 1969 Nobel Prize in Physics; and Lord Martin Rees, a renowned astronomer and past president of the Royal Society.

The BEYOND Center for Fundamental Concepts in Science is a pioneering international research center established in 2006 at ASU. This “cosmic think tank” is specifically dedicated to confronting the big questions raised by advances in fundamental science, and facilitating new research initiatives that transcend traditional subject categories. More information is available at 480-965-3240 or http://beyond.asu.edu.

In addition to the March 29 BEYOND lecture, Dyson also will participate in “The Great Debate: Xenophobia, why do we fear others?” This ticketed event at 7 p.m. March 31 in Gammage Auditorium is presented by the Origins Project at ASU. Additional information is available at http://www.origins.asu.edu/events/xenophobia.