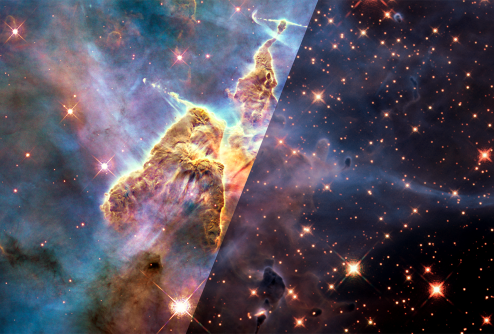 Newswise — The human eye can only see visible light, but that isn’t the only kind of light out there. Of the entire spectrum of light and color, visible light is a mere sliver. Many animals, such as birds, bees, and some fish, can see ultraviolet light that’s beyond the violet end of the spectrum. At the other end of the spectrum, beyond red, lies infrared light. Infrared light is emitted not only by objects on Earth, but throughout the universe. A new website with interactive sliders lets visitors explore the multiwavelength cosmos and learn the secrets that are revealed by going beyond visible light.

These interactives are part of Viewspace.org, a free, web-based collection of dozens of digital interactives and hundreds of videos highlighting the latest developments in astronomy and Earth science.

The interactive sliders are grouped according to the objects being viewed. Users might begin with the “infrared world,” which shows how familiar animals like giraffes and meerkats appear in infrared light, highlighting the warmest parts of the animal. The other interactives take a more cosmic bent, focusing on star birth and death, the Milky Way, other galaxies, and colliding galaxies.

These interactives include data from space mission archives that have not been used previously for public outreach. They are intended to be a resource for informal learning environments like museums, science centers, and libraries. They also offer anyone in the public an opportunity to explore their own interests and learn at their own pace. Users can gain a new perspective on the universe by appreciating the information conveyed by light beyond visible wavelengths.

The ViewSpace website also previews the ViewSpace video collections. These videos are shared with participating planetariums, science centers and other venues throughout the world. An interactive map allows visitors to find the closest ViewSpace venue.

The ViewSpace product is based upon work supported by NASA under award numbers NNX16AC65A and NNX15AB26G and contracts NAS5-26555 and NAS5-03127. Any opinions, findings, and conclusions or recommendations expressed in ViewSpace material are those of the author(s) and do not necessarily reflect the views of the National Aeronautics and Space Administration.