7-May-2018 9:30 AM EDT, by Brookhaven National Laboratory
favorite_border

A group of students from Wits University in South Africa remotely attends a lecture given by a scientist at Brookhaven Lab. The lecture is part of an online program designed to introduce graduate students to advanced x-ray-based techniques for materials characterization using a synchrotron light source.

Students from the University of Puerto Rico are among the more than 60 students who are currently taking the online synchrotron light source course.

Brookhaven Lab physicist Eric Dooryhee explains how he uses x-ray powder diffraction at the National Synchrotron Light Source II to determine the structure of materials. In addition to the in-classroom students pictured above, more than 60 students from Wits University in South Africa, the University of Puerto Rico, the University of the West Indies, Howard University, and Hampton University remotely dialed in for the lecture through videoconferencing. 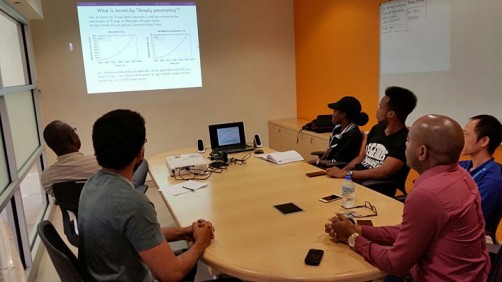 Students from the University of the West Indies, St. Augustine Campus learn about a test to estimate the reduction in intensity of an x-ray beam as it passes through matter.

Newswise — When an electron in motion changes direction in a magnetic field, it emits energy in the form of light. Stadium-sized ring-shaped machines called synchrotrons—such as the National Synchrotron Light Source II (NSLS-II), a U.S. Department of Energy (DOE) Office of Science User Facility at Brookhaven National Laboratory—take advantage of this phenomenon to generate many beams of bright x-ray light. At several points around the ring, this light is directed toward different experimental stations, known as beamlines, and then to scientific research instruments such as microscopes. Scientists use the light at these beamlines to study the structure and chemical composition of a wide range of materials, from batteries and other energy storage devices to soil, biological molecules, and metals. At NSLS-II, 26 beamlines are currently in operation or commissioning, and three more are under construction. When fully built, the facility will host around 60 beamlines—meaning 60 experiments can be conducted at once.

Now, Brookhaven Lab is applying such a simultaneous approach in a different capacity: to broaden the awareness of photon science in the scientific community and help train the next generation of synchrotron light source users and scientists. The Lab recently partnered with several universities in different areas of the world to start an online lecture series on various techniques scientists use at NSLS-II to characterize the structure, chemical composition, and physical properties of materials.

The lectures were originally taught as part of a three-credit graduate course at three universities, starting with Columbia in fall 2015 and expanding to Yale and Stony Brook in spring 2016. Brookhaven has continued to offer the course in subsequent semesters. Each week, a scientist from NSLS-II or the Center for Functional Nanomaterials (CFN)—another DOE Office of Science User Facility at Brookhaven—who conducts research at the NSLS-II beamlines travels to these campuses to present the material during a two-and-a-half-hour lecture. The scientists who volunteer to teach the course are subject-matter experts for the particular beamline techniques.

“The purpose of the course is to make graduate students, ideally those in their first year, aware of the advanced synchrotron radiation and electron techniques and capabilities at NSLS-II and CFN so that they can come here as users to effectively do their research,” said Qun Shen, deputy director for science at NSLS-II and the Brookhaven lead for the course. “Reaching out to these students early in their careers will help us expand our user base and support workforce development.”

Such on-campus courses have been attractive to local universities and students, some of whom have already become users at NSLS-II and CFN. But Shen and John Hill, deputy associate laboratory director for Energy and Photon Sciences at Brookhaven Lab and director of NSLS-II, realized that a whole lot more students could be reached if the course was offered online.

Extending the reach of synchrotron science

Shen formed a partnership with Noel Blackburn, manager of university relations and DOE programs within the Office of Educational Programs at Brookhaven Lab, to get the process started. Blackburn contacted universities in the Interdisciplinary Consortium for Research and Educational Access in Science and Engineering (INCREASE), an organization whose mission is to promote research and education at minority-serving institutions, especially through increasing their use of national user facilities. For the pilot online course, Blackburn brought five universities on board: the University of the Witwatersrand (Wits University) in South Africa, the University of the West Indies and the University of Puerto Rico in the Caribbean, and Howard University and Hampton University in the continental United States.

“In the future, we plan to offer the online program to more universities, as our goal is to reach as many students and faculty as possible,” said Blackburn. “And as more beamlines come online, we plan to expand the number of techniques covered in the lectures. Our intent is to expose the students to the many capabilities at NSLS-II, giving them the tools to enhance their research capacity at their home institutions. Once they become familiar with the experimental techniques, the students could contribute to writing the competitive proposals that are required to gain access to the facilities at NSLS-II.”

The course—called Advanced Synchrotron and Electron Techniques and Applications— launched in mid-January, with Shen presenting the first of 12 lectures to 62 students from the remotely participating universities and eight staff members and spring 2018 interns on site at Brookhaven. Shen introduced the students to x-ray interactions with matter, laying the foundation for them to understand the techniques discussed in the rest of the lectures, which ran every week until the end of April.

In the following weeks, NSLS-II and CFN scientists presented lectures on different techniques—including x-ray photoelectron spectroscopy, x-ray scattering, and x-ray imaging and microscopy—and their applications. A complete list of the lectures and the corresponding slides are available on Brookhaven’s website.

“As a lecturer, I find it very enjoyable to interact with the students,” said Shen. “They bring fresh perspectives and questions to scientific problems that we have been thinking about for many years.”

“Some gauge of success in transmitting the ideas is that a few pretty perceptive questions came in from the students during the lecture,” added biophysicist Robert Sweet, deputy director of the Life Science and Biomedical Technology Research Center at NSLS-II. Sweet presented the second lecture, which focused on x-ray diffraction and crystallography.

The online course is set up to function like it would in a traditional classroom setting. Lecturers use videoconferencing software to give their presentations, and a point of contact at each university uses a chat room to type questions from students. To ensure that all of the students hear each other’s questions, Salvador Gonzalez, an educational program representative in Brookhaven’s Office of Educational Programs, reads the questions aloud. Homework is assigned after each lecture, and students take two exams—a midterm and a final. Teaching assistants from each of the participating universities are responsible for grading the students on the basis of their institution’s grading system.

So far, the online course has been very well received.

“This course is the most difficult but one of the best courses that I have taken,” said Jermaine Smith, a graduate student in materials chemistry at the University of the West Indies, Mona Campus. “It is thought-provoking, stretching the bounds of my imagination in ways that I have not been stimulated before. The material covered each week is opening my eyes to a relatively new type of science that is cutting edge and dynamic. I am grateful to Brookhaven for providing young scientists like me with the opportunity to get exposed to techniques that may lead to new discoveries and breakthroughs in critical scientific areas.”

“The course curriculum delivered by the respective experts has provided me with knowledge of the full potential of synchrotron-radiation-based techniques and increased my capacity as a doctoral candidate in materials chemistry,” said Zeyar Min of the University of the West Indies, Mona Campus. “Most significantly, this course has equipped me with the necessary foundation in x-ray techniques to be a competent user of equipment at NSLS-II and to write competitive proposals for beam time.”

In addition to gaining a generalized knowledge of photon science and the corresponding experimental techniques, students are realizing how these techniques can benefit their own research projects.

“The course is quite pertinent to my research on NASICON-type [sodium super-ion conductor] bimetal phosphates for applications as solid-state electrolytes in lithium-ion batteries,” said Wits University graduate student Gugulethu Nkala. “These materials could be a promising alternative to liquid electrolytes, which are not environmentally friendly, but one of the drawbacks is that their crystal form, or structure, changes with temperature. Each “polymorph” has its own electrical properties, giving rise to variable voltage outputs. I am trying to find ways to mitigate this temperature-dependent polymorphism, with the goal of improving the storage capacity of batteries. The x-ray synchrotron course has shed light on techniques that can be used to study these materials. For example, x-ray powder diffraction allows me to see how the crystal lattice changes as a battery is in use—information that is key to understanding the degradation mechanisms through which the battery becomes spent.”

Professors at the participating universities have also seen the positive impact of the course.

“I have been sitting in on the course, and am impressed by the content of the lectures and by the commitment of the schools, with their students enrolled in complementary courses,” said Eric Sheppard, chair of INCREASE and a research associate professor in engineering at Hampton University. “I am also learning myself! I look forward to discussions with NSLS-II leadership about future offerings of the online lecture course that may include additional INCREASE schools.”

According to Shen, the course will ultimately improve the productivity of the NSLS-II beamlines: “If the students and faculty members understand the physics behind their experiments and the important parameters they need to measure when they come to NSLS-II, they can become more efficient and effective users. A proficient user community will result in better science data that can then be published and shared with the rest of the scientific community.”

Caption: A group of students from Wits University in South Africa remotely attends a lecture given by a scientist at Brookhaven Lab. The lecture is part of an online program designed to introduce graduate students to advanced x-ray-based techniques for materials characterization using a synchrotron light source.

Caption: Students from the University of Puerto Rico are among the more than 60 students who are currently taking the online synchrotron light source course.

Caption: Brookhaven Lab physicist Eric Dooryhee explains how he uses x-ray powder diffraction at the National Synchrotron Light Source II to determine the structure of materials. In addition to the in-classroom students pictured above, more than 60 students from Wits University in South Africa, the University of Puerto Rico, the University of the West Indies, Howard University, and Hampton University remotely dialed in for the lecture through videoconferencing. 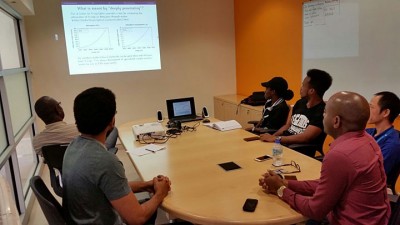 Caption: Students from the University of the West Indies, St. Augustine Campus learn about a test to estimate the reduction in intensity of an x-ray beam as it passes through matter.