Investigating the Mechanisms of Metastasis 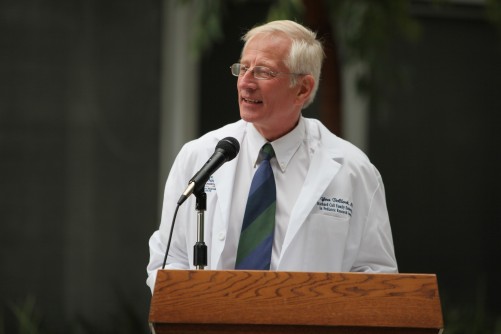 Newswise — Cancer metastasis – the spread of disease from the original site to a distant organ – remains a major challenge in treating cancer and a main cause of morbidity and mortality. A widely accepted explanation for this process – called “the seed and soil” hypothesis – recognizes the need for the cancer cell or “seed” to travel to a hospitable environment – the “soil”.

To understand metastasis, many investigators have focused on the cancer cell– or seed. Yves DeClerck, MD, a pediatrician-scientist at Children’s Hospital Los Angeles and co-leader of the Tumor Microenvironment Program at the USC-Norris Comprehensive Cancer Center, has studied this topic for his entire career from a slightly different perspective, concentrating on the “soil” or tumor microenvironment. Because of his recognition as a leader in this area, DeClerck was recently awarded $2.2 million from the National Cancer Institute, to investigate the microenvironment from a relatively new context. The study will focus on a newly identified type of messenger -- extracellular vesicles released by cancer cells into their environment. These vesicles, called exosomes, are small sacs shed by tumor cells that contain protein, DNA, RNA and lipids. Exosomes are taken in by other cells and can modify behavior of the receiving cell.

According to DeClerck, healthy cells are typically inhospitable to cancer cells. What causes them to change from foe to friend? “There are different ways that cancer cells communicate with normal cells – causing the change – and one of these ways is through exosomes,” said DeClerck, who is a professor of Pediatrics and Biochemistry and Molecular Medicine at the Keck School of Medicine of USC. He also holds the Richard Call Family Endowed Chair in Pediatric Research Innovation at CHLA.

DeClerck’s collaborator on the NCI study is David Lyden, MD, of Weill Cornell Medical College, who originally proposed the role of tumor-secreted exosomes in cancer metastasis.

Recently DeClerck, along with collaborators at CHLA and Keck, published on this topic. The first paper, in the Journal of Extracellular Vesicles, describes research conducted during his sabbatical, spent in the lab of co-author Pascale Zimmermann in Marseille, France. His research identified how exosomes, shed by neuroblastoma cells, induce bone marrow mesenchymal progenitor cells to release factors favorable to cancer cells.  A subsequent paper, recently published in Cancer Research, describes the mechanisms by which these bone marrow cells – also present in primary tumors – promote the growth of neuroblastoma cells and their resistance to chemotherapy.

“What if you could intervene early and prevent the cancer cell from modifying the bone marrow – keeping it inhospitable to cancer,” said DeClerck. “Instead of figuring out how to treat metastatic disease, we could prevent it.”

About Children's Hospital Los Angeles  Children's Hospital Los Angeles has been ranked the top children’s hospital in California and sixth in the nation for clinical excellence with its selection to the prestigious U.S. News & World Report Honor Roll. CHLA is home to The Saban Research Institute, one of the largest and most productive pediatric research facilities in the United States. Children’s Hospital is also one of America's premier teaching hospitals through its affiliation with the Keck School of Medicine of the University of Southern California since 1932. For more information, visit CHLA.org.