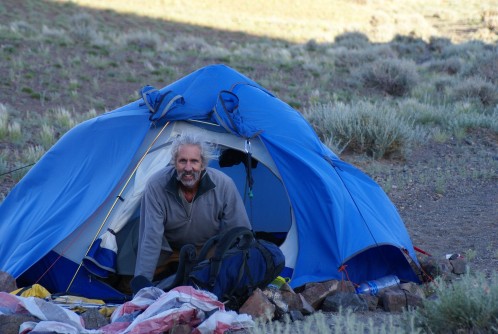 Berger emerging from sleep in the Gobi Desert, Mongolia

Newswise — (INDIANAPOLIS-January 30, 2014)— Joel Berger, Ph.D., is one of six exceptional conservationists advancing as a finalist for the 2014 Indianapolis Prize, the world's leading award for animal conservation. Selected from a group of 39 nominees, Berger is in the running for $250,000 along with Gerardo Ceballos, Ph.D.; Carl Jones, Ph.D.; Russell A. Mittermeier, Ph.D.; Carl Safina, Ph.D.; and Patricia C. Wright, Ph.D. These heroes were nominated and named finalists for their outstanding achievements on behalf of the world’s most endangered species.

In the Arctic as on the Tibetan Plateau, global warming advances at twice the rate than elsewhere in the world, and land animals – particularly muskoxen and wild yaks – are the first to feel the effects. Like polar bears, muskoxen and yaks are modern metaphors for climate change. Joel Berger, Ph.D., faces sub-zero temperatures and travels across hundreds of miles of Arctic and alpine tundra to understand why populations of these species are changing, and what we can do about it. His work, setting in motion a new enthusiasm applying science to conservation actions, is why Berger has advanced as a finalist for the 2014 Indianapolis Prize.

Berger, a senior scientist at the Wildlife Conservation Society, led the creation of America’s first federally sanctioned wildlife migration corridor, the Path of the Pronghorn, in Wyoming's Yellowstone Ecosystem. The Path protects an icon of the American West as it travels an ancient route across sagebrush plains and mountains. Berger achieved this victory by working with stakeholders, including ranchers, oil and gas companies, local county officials, Wyoming’s Governor and federal agencies. Though cumbersome, Berger’s perseverance stands as testament to the feasibility of protecting landscapes for migrating wildlife.

Abroad, Berger’s studies and economic analyses prompted African nations like Namibia and Zimbabwe to reevaluate the practice of rhino dehorning. For over a decade, dehorning was considered a radical conservation tactic, until Berger and his team examined the efficacy of horn removal and concluded that the practice was not favoring rhino survival. On opposite sides of the world, Berger also leads teams to conserve Mongolia’s saiga antelope populations and speaks to the harmful effects of the cashmere trade on other endangered icons of central Asia.

“Globally, his work has set into motion new excitement in conservation and research on migration ecology, from pronghorn in North America to saiga in Mongolia and beyond,” said John Robinson, executive vice president of conservation and science at the Wildlife Conservation Society. “He is a quiet conservation science hero with an impressive publishing record, and he is deserving of the Indianapolis Prize.”

Berger’s approach seeks to identify and enable actionable conservation. Tossing out convention, engaging unusual partnerships and moving beyond science make up his conservation philosophy. Though Berger often works with mammals that he can only observe at a distance, he realizes that people matter, and conservation requires both bottom-up and top-down approaches. Through storytelling and collaboration, Berger inspires others to care about nature.

Berger is currently the John J. Craighead Chair in Wildlife Biology at the University of Montana and directs a number of projects for the Wildlife Conservation Society in North America and Asia. He is currently an editor for the Society of Conservation Biology. After completing his Ph.D. at the University of Colorado in Boulder, he spent seven years with the Smithsonian Institution, and has since been involved with conservation education for national and international students across diverse geographies.

The Indianapolis Prize was first awarded in 2006 to George Archibald, Ph.D, the co-founder of the International Crane Foundation. The 2008 winner was George Schaller, Ph.D., senior conservationist for the Wildlife Conservation Society and an icon in field conservation around the world. In 2010, the Indianapolis Prize was awarded to Iain Douglas-Hamilton, Ph.D., founder of Save the Elephants, who pioneered research in elephant social behavior and has led the way in fighting poaching of African elephants. Steven Amstrup, Ph.D., of Polar Bears International, received the 2012 Indianapolis Prize for his field work and research that led the United States to declare polar bears as threatened under the U.S. Endangered Species Act.