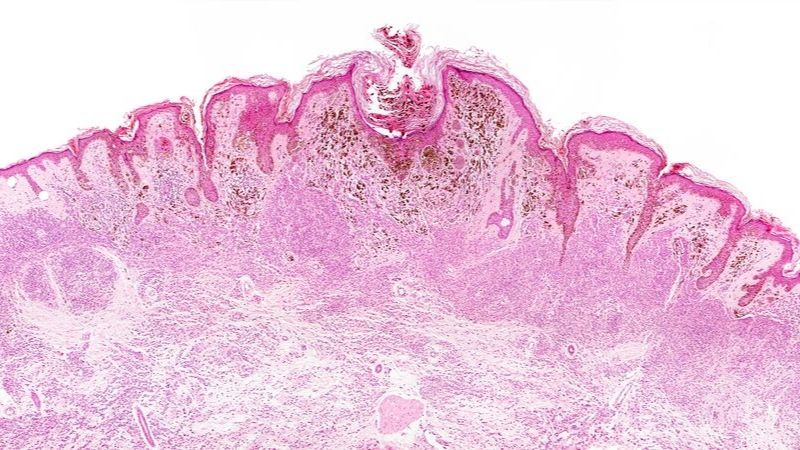 They reported their findings June 16 in RNA Biology online.

Melanoma strikes an estimated 96,000 Americans each year, and kills about 7,200, making it the most fatal skin cancer in the United States, in large part due to its aggressive nature and its potential to metastasize. Perera says more work is needed to understand the abnormal biology underlying the cancer’s growth and spread, and to provide potential new targets for treatment.

Generally, Perera says, scientists approach their studies of the genetics of melanoma by looking to see which gene and protein products are up- or down-regulated in tumor cells compared with normal skin progenitors. Instead, he says, his team’s “transcriptome stability” approach looks at how long so-called gene transcripts — the RNA molecular instructions that are “read” from DNA before being translated into proteins — survive in tumor cells before they degrade.

“It is important to understand during tumorigenesis or tumor progression how these transcripts behave,” says Perera. “So we decided to look at a completely new angle of genomewide RNA stability and decay during the first steps in the development of melanoma,” he adds.

Other researchers, Perera notes, have attempted to profile genomewide transcript stability by using chemicals that block all transcription, and then observing the stability of the transcripts that existed before blocking. This sledgehammer method, however, is considered toxic, and can alter other aspects of a cell’s biology in ways that may obscure transcript stability information. To address this, Perera and colleagues used BRIC-seq, a method that tags transcripts with 5-Bromouridine, which is incorporated into newly synthesized RNAs and then can be immunocytochemically analyzed over time without disturbing the rest of the cellular environment.

In a melanoma cell line that normally lacks miR-211, the researchers introduced miR-211 expression and then used the BRIC-seq method to investigate transcriptome stability dynamics in the presence/absence of miR-211. They then combined these results with changes in overall gene expression levels and used computer program prediction tools to identify the specific gene targets of miR-211, discovering the previously unreported target DUSP3.

As part of their ongoing studies, Perera and his colleagues are also looking at how miR-211 might affect other melanoma gene transcripts in ways that promote cancer metastasis and resistance to certain anti-cancer drugs.

The research was supported by the National Institutes of Health under the awards R21CA202197, NCI 5P30CA030199 and P30 CA006973 and the Florida Department of Health, Bankhead-Coley Cancer Research Program.