Just Slip Out the Back, Jack

We’re Wired to Get Over Romantic Break Ups 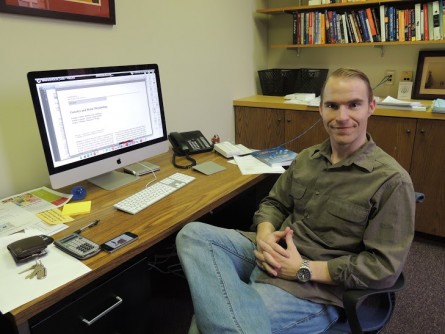 “Our review of the literature suggests we have a mechanism in our brains designed by natural selection to pull us through a very tumultuous time in our lives,” said Brian Boutwell, Ph.D., associate professor of criminology and criminal justice and associate professor of epidemiology at Saint Louis University. “It suggests people will recover; the pain will go away with time. There will be a light at the end of the tunnel.”

Drawing largely upon the field of evolutionary psychology, they say men and women might break up for different reasons. For instance, a man is more likely to end a relationship because a woman has had a sexual relationship with another man. For evolutionary reasons, men should be wired to try and avoid raising children that aren’t genetically their own, the authors say.

“Men are particularly sensitive to sexual infidelity between their partner and someone else,” Boutwell said. “That’s not to say women don’t get jealous, they certainly do, but it’s especially acute for men regarding sexual infidelity.”

On the other hand, a woman may be more likely to break up if her partner has been emotionally unfaithful partly because of evolutionary reasons. Over the deep time of evolution, natural selection has designed mate ejection in females to avoid the loss of resources, such as help in raising a child and physical protection, that their mates provide.

Sometimes both men and women end a relationship for the same reason. “For instance, neither gender tends to tolerate or value cruelty on the part of their partner,” Boutwell said.

In addition, some people might be more likely than others to fall out of love or have problems moving. The ability to break up and find someone new to love lies along a continuum, influenced by environmental and genetic factors.

Brain imaging studies of men and women who claimed to be deeply in love also provided important clues about dealing with breakups. Functional MRIs showed an increase in neuronal activity in the parts of the brain – the pleasure areas – that also become active with cocaine use.

“Helen Fisher’s work has revealed that this circuitry in the brain, which is deeply associated with addictive behaviors, also is implicated in the feelings associated with romantic attraction and may help explain the attachment that often follows the initial feelings of physical infatuation with a potential mate. Think of it as that initial feeling of falling in love, when you want to constantly be around the other person, almost in an addictive way,” Boutwell said.

Falling out of love, Boutwell contends, might be compared to asking a cocaine addict to break his or her habit.

“To sever that bond and move on is a huge ask of a person,” he said. “Ultimately, trying to move on from a former mate may be similar in some ways to an attempt at breaking a drug habit.”

Building off the drug addiction analogy, Boutwell examined studies about the brains of former cocaine addicts to try to predict how the brains of those who are breaking a relationship habit might look. Images of the brains of those no longer using cocaine showed a larger volume of gray matter in various brain regions, which were markedly different from images of brains of active cocaine users.

“We might argue that different regions of the brain act in a way that once that addiction has been severed, then help to facilitate a person moving on and finding a new partner,” Boutwell extrapolated. “A person might initially pursue their old mate—in an attempt to win back their affection. However, if pursuit is indeed fruitless, then the brains of individuals may act to correct certain emotions and behaviors, paving the way for people to become attracted to new mates and form new relationships.”

Conducting functional MRI studies that examine the brains of men and women who have rebounded from a relationship and fallen in love again would provide additional evidence to lend credibility to or dismiss the addiction hypothesis, he added.

In an additional attempt to understand what is going on inside the brain when a relationship ends, Boutwell examined research regarding the impact of a group of antidepressant medications called selective serotonin reuptake inhibitors (SSRIs) on romantic love. The use of SSRIs can potentially lower levels of dopamine, norepinephrine and testosterone, which might stifle romantic feelings and sexual interest.

“This is not to say that people should cease using their anti-depressants without consulting their doctors. That could be potentially tragic and a very bad decision,” Boutwell said. “Rather, like any medication, it is important to fully understand the side effects. In this case, those side effects might impinge on the intimate feelings of one partner towards another.”

Boutwell urged more research into lost love to better understand the difficulties that can creep into a romantic relationship.

“If we better understand mate ejection, it may offer direct and actionable insight into ways in which couples can save a relationship that might otherwise come to stultifying and abrupt halt,” he said.

The review paper was published in the March 2 issue of the Review of General Psychology. Coauthors are J.C. Barnes, Ph.D., University of Cincinnati, and Kevin M. Beaver, Ph.D., Florida State University and King Abdulaziz University in Saudi Arabia.

The Saint Louis University College for Public Health and Social Justice is the only academic unit of its kind among the nearly 250 Catholic institutions of higher education in the United States.