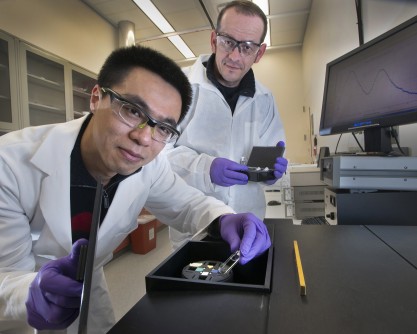 Zhongwei Liu, a graduate student from Stony Brook University, working with Brookhaven's Mircea Cotlet on a new type of DNA sensor at the Center for Functional Nanomaterials.

Light-up DNA sensors: When DNA sequences are complementary, one fluorescent dye molecule (red rectangle) binds between each matching base pair. The conjugated polymer (blue) wraps around the DNA, absorbs light, and transfers the energy (via fluorescence resonant energy transfer, or FRET) to the dye to amplify the photo luminescent (PL) signal (red arrow). When DNA strands don't match perfectly, fewer dye molecules bind and the magnitude of the PL signal is reduced.

Newswise — Using principles of energy transfer more commonly applied to designing solar cells, scientists at the U.S. Department of Energy’s Brookhaven National Laboratory have developed a new highly sensitive way to detect specific sequences of DNA, the genetic material unique to every living thing. As described in a paper published in the journal Chemistry of Materials, the method is considerably less costly than other DNA assays and has widespread potential for applications in forensics, medical diagnostics, and the detection of bioterror agents.

“The sensors we’ve developed use a light-absorbing polymer to amplify the fluorescent signal of a dye that emits light only when it binds between two matched pieces of DNA,” said Mircea Cotlet, a physical chemist at Brookhaven’s Center for Functional Nanomaterials, who led the research and who is also an adjunct professor at Stony Brook University. The system is sensitive enough to detect individual mismatches between the bases that make up the “rungs” of the twisted-ladder DNA double helix molecule, making it highly specific with no false positives, Cotlet said.

Plus, the method is rapid and requires no expensive equipment, just a conventional laboratory fluorimeter. It has high potential to be made field deployable for rapid analysis of crime-scene evidence and to mount a more knowledgeable, speedy response to bioterror threats.

The idea of using glowing dyes to sniff out DNA sequences is not entirely new. But finding an inexpensive fluorescent dye that inserts itself between every complementary base pair of a DNA molecule—and using a light absorbing/emitting polymer to amplify the fluorescent signal without the need for additional chemical tagging—makes the Brookhaven approach a big advance.

“The dye we use is hundreds of times cheaper than popular commercial intercalating dyes,” said Zhongwei Liu, a graduate student from Stony Brook University working with Cotlet and first author of the paper. Unbound, the green colored molecule absorbs red light but does not emit light. “But when it inserts itself in the grooves of the DNA, the dye becomes fluorescent. And so far it is the only dye that can intercalate so densely with DNA—meaning exactly one dye molecule binds between each complementary base pair of the DNA double helix”—the T-A and G-C matches that make up the genetic code.

That means the strength of the fluorescent signal is directly related to how many dye molecules are bound—and how closely an unknown DNA sample matches a probe strand used for testing. As soon as there’s a mismatch, even at just one “rung” on the DNA ladder, a dye molecule won’t bind and the signal will weaken. Two mismatches results in a proportional drop in signal strength, and so on. “That gives us a large range for the detection of sequence mismatch,” Cotlet said.

To amplify these signals, the scientists add a conjugated polymer. These light-absorbing materials are used for harvesting sunlight in solar cells, “but we can also make them water soluble and compatible with biomolecules like DNA,” Cotlet said.

Synthesized by Hsing-Lin Wang, a collaborator at DOE’s Los Alamos National Laboratory, the polymers used in this study were functionalized with side chains that carry a positive charge, allowing them to naturally bind with negatively charged DNA via electrostatic interactions. “The polymer wraps and follows the helix of the DNA,” Cotlet said. “This configuration brings the polymer in close proximity with the DNA-bound dye molecules and also enhances the polymer’s ability to absorb and emit light. Both of these factors help with the transfer of energy to the dye-intercalated DNA and increase the sensitivity of the biosensor,” Cotlet said.

So if scientists want to know whether two pieces of DNA are identical—say a known sequence from an anthrax spore and one from a suspicious-looking white powder—all they have to do is mix the samples, dye, and polymer in a test tube, turn on the light, and let the results shine for themselves. Of course, in this case, they’d be hoping to not see the light!

The Center for Functional Nanomaterials at Brookhaven National Laboratory is one of the five DOE Nanoscale Science Research Centers (NSRCs), premier national user facilities for interdisciplinary research at the nanoscale. Together the NSRCs comprise a suite of complementary facilities that provide researchers with state-of-the-art capabilities to fabricate, process, characterize and model nanoscale materials, and constitute the largest infrastructure investment of the National Nanotechnology Initiative. The NSRCs are located at DOE’s Argonne, Brookhaven, Lawrence Berkeley, Oak Ridge and Sandia and Los Alamos national laboratories. For more information about the DOE NSRCs, please visit http://nano.energy.gov.

Electronic copy of this news release on the BNL website: http://www.bnl.gov/newsroom/news.php?a=24790 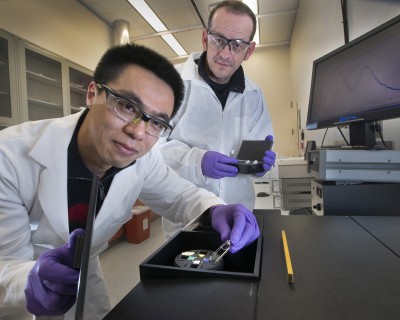 Caption: Zhongwei Liu, a graduate student from Stony Brook University, working with Brookhaven's Mircea Cotlet on a new type of DNA sensor at the Center for Functional Nanomaterials.

Caption: Light-up DNA sensors: When DNA sequences are complementary, one fluorescent dye molecule (red rectangle) binds between each matching base pair. The conjugated polymer (blue) wraps around the DNA, absorbs light, and transfers the energy (via fluorescence resonant energy transfer, or FRET) to the dye to amplify the photo luminescent (PL) signal (red arrow). When DNA strands don't match perfectly, fewer dye molecules bind and the magnitude of the PL signal is reduced.