Life after landing on Mars 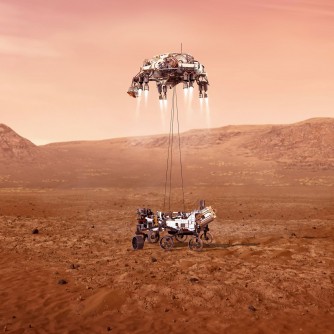 After Perseverance lands in this crater in February 2021…what happens next? Hear about where it will go, what it will look for, and how the team will "drive" it all the way from Earth on a new episode of Mars Technica.

Newswise — LOS ALAMOS, N.M., August 27, 2020—When NASA’s Perseverance rover lands on Mars in February after its seven-month-long journey, the mission will only just be beginning. What will a day in the life of the rover look like as it traverses the dusty surface of the Red Planet, looking for signs of past life? And what features of the landing site are most of interest? In a new episode of the Mars Technica podcast, three experts explain.

“A lot of people think we drive the rover with a joystick back on Earth like a video game,” said Roger Wiens, who leads the team for the SuperCam instrument aboard the Perseverance rover. “But Mars is just too far away to have that kind of immediate control. It takes many minutes for a radio signal to get to Mars. So instead, we program the rover to operate for a whole day—or several days—and it works robotically on its own and eventually sends us back the data, usually the next day. Then we do it all over again. It’s a more time-consuming process than many people realize.”

Wiens is joined by scientists Patrick Gasda and Nina Lanza to talk more about how they direct the rover, where the rover will be looking for water, and why it’s important not to make big claims about life on Mars unless there’s a mountain of evidence.

This is the fifth episode of Mars Technica, a new seven-series podcast produced by Los Alamos National Laboratory, which delves into the Lab’s role on the Mars Perseverance mission.

Upcoming episodes include more discussions about signatures of life on Mars and what secrets rock varnish might hold. You can stream episodes via the Mars Technica website at https://mars-technica.simplecast.com/.

You can also to find and subscribe to Mars Technica on Apple Podcasts, Spotify, Stitcher and Google Podcasts.