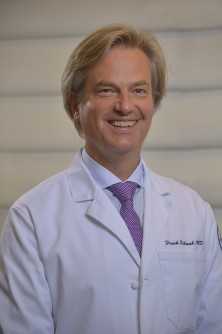 Newswise — The surgical correction of adult spinal deformities often involves realigning the lower portion of the spine, or the ‘lumbar’ spine. Yet despite significant advances in spinal surgery, modifying the curvature of the lower spine through surgical fusion increases the risk of abnormal spinal curvature above the level of the operation, a condition called proximal junctional kyphosis – or PJK.

A new study reports for the first time that PJK risk following lumbar spinal fusion depends on the level of the spine fused. Specifically, the authors – who include members of the International Spine Study Group (ISSG) from multiple academic centers – found that fusing the lower portion of the lumbar spine results in a decreased risk of PJK. The results were presented at the American Academy of Orthopaedic Surgeons Annual Meeting on March 14 in San Diego, California.

In the study, 350 adult patients who had undergone fusion of their lumbar spine spinal abnormalities were divided into those who had developed PJK following their procedures and those who did not. The specific vertebrae fused in their surgeries were then compared, revealing to the authors that more dramatic spinal fusions – those higher up along the spine – may increase the risk of developing PJK.

“This study is unique in the sense that it looks at a very common problem, currently intensively studied around the world, and examines this challenge through an innovative method,” says investigator Frank Schwab, MD, chief of the Spine Service at Hospital for Special Surgery.

Dr. Schwab also points out that while numerous theories on PJK risk have been put forth over the years, few orthopedic centers have had enough data or resources to adequately study it.

“Our findings give us a substantial boost in shifting the discussion from expert opinion to a more evidence-based conclusion,” he says, “Additionally, they also offer a pragmatic solution that can be applied right away in order to reduce PJK rates.”