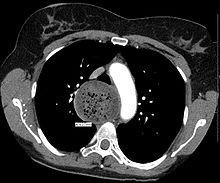 Achalasia is a condition where the nerves of the esophagus degenerate and cause failure of the normal swallowing process, says Mukund Venu, MD, gastroenterologist at Loyola University Health System.

Newswise — Ron Schmidt was on an Alaskan cruise a year ago when he noticed he had trouble swallowing. “I joked with my friends that I was a slow eater and urged them to continue on to dessert but I knew something was wrong,” says the retired outplacement counselor.

Schmidt talked to his primary care doctor who referred him to an ear, nose and throat specialist. “They thought it was acid reflux and put me on a very strict diet with medication but it still didn’t help,” says Schmidt. “I was then sent to a gastroenterologist who diagnosed and cured my illness.”

Mukund Venu, MD, is a gastroenterologist who specializes in swallowing disorders at Loyola University Health System in Maywood, Ill. “Ron had a rare condition called achalasia, where the esophagus fails to deliver food into the stomach when eating,” says Venu. “The nerve cells of the esophagus degenerate and cause failure of the normal swallowing process.” Achalasia has no known cause and can happen to people of all ages.

“I call it a withering disease because if you do not get treatment, you wither away,” says Schmidt, a slightly built man who lost 20 pounds before being cured. “It also was very disturbing to not enjoy food and to not share meals socially with friends.”

In addition to weight loss and regurgitation, other symptoms of achalasia can include chest pain, heartburn, difficulty burping, a sensation of fullness or a lump in the throat and hiccups.

Dr. Venu and the gastroenterology team performed several tests including an esophageal manometry to evaluate the strength and coordination of the esophageal muscles. A thin, pressure-sensitive tube is passed through the nose, down the esophagus and into the stomach. The failure of Schmidt’s esophageal muscles to contract and relax normally was discovered.

“As an academic medical center, Loyola has equipment that is not available at most other medical facilities. On average, patients suffer from achalasia for five years before it is finally diagnosed and successfully treated. At Loyola gastroenterology, we were able to help Ron return to normal life within weeks,” says Venu, who also is an assistant professor of medicine, Loyola University Chicago Stritch School of Medicine.

There are two common options for treatment of achalasia. Heller myotomy is a surgical procedure where the lower esophagus muscle is removed. A less-invasive approach is a pneumatic or balloon dilatation where the constricted muscle of the esophagus is stretched open.

After several conversations with Dr. Venu, Schmidt chose the series of two balloon dilatations. “After the very first procedure, I was eating and drinking normally,” says Schmidt. “The second dilatation was one week later and in my mind just sealed the deal. I have been fine for several months now and just need to keep a watch to see if any symptoms return.”

Schmidt values the relationship he formed with Dr. Venu. “Dr. Venu always had all the time in the world to talk to me and make sure I understood my condition and was comfortable with the treatment,” says Schmidt, who recently celebrated his 79th birthday at a dinner with relatives. “He posted tests results immediately on MyLoyola so I never had to wait or worry.” MyLoyola is a free secure online account system where patients can: schedule or request medical appointments; view test results; communicate with the medical care team and more.

The gastroenterology & nutrition group at Loyola University Medical Center provides comprehensive, high-quality care in the diagnosis and treatment of diseases of the gastrointestinal system, which includes the esophagus, stomach, gallbladder, pancreas, intestines and liver. The team is composed of physicians, registered nurses, dietitians, pharmacists and research staff. Approximately 8,500 procedures are performed and 13,000 outpatient and inpatient visits occur each year.