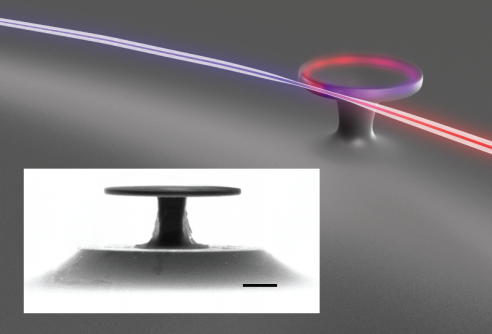 Figure and caption information from paper reprinted with permission of Authors: Input light at the fundamental wavelength (represented by red light) is converted inside the micro-disk to second harmonic light (represented by blue light). The inset shows a scanning electron micrograph of a fabricated device. The scale bar is 1 mm. For more information and figures, the paper is Open Access http://www.nature.com/ncomms/2014/140117/ncomms 4109/full/ncomms4109.html Image credit for this and rotator image: T. Thomay/JQI

Newswise — Color is strange, mainly due to perception. Setting aside complex brain processes, what we see is the result of light absorption, emission, and reflection. Trees appear green because atoms inside the leaves are emitting and/or reflecting green photons. Semiconductor LED brake lights emit single color light when electrical current passes through the devices.

Here’s a question: Can scientists generate any color of light? The answer is not really, but the invention of the laser in 1960 opened new doors for this endeavor. An early experiment injected high-power laser light through quartz and out popped a different color. This sparked the field of nonlinear optics and with it, a new method of color generation became possible: frequency conversion.

Not all crystals can perform this trick and only through careful fabrication of certain materials is frequency conversion possible. In a result published in Nature Communications (DOI: 10.1038/ncomms4109), scientists* demonstrate a new microstructure that does what’s called second harmonic generation (SHG), where the output light has twice the frequency as the input. This new device is a factor of 1000 smaller than previous frequency converters.

You can’t really get something from nothing here. Physics demands that both energy and momentum are conserved in the frequency-doubling process. The energy of light is directly related to its frequency through a fundamental constant, thus this conservation law is automatically satisfied. Two photons of fixed energy pass into the conversion crystal and the output photon has a frequency, thus energy, equal to their sum.

The challenging part is momentum conservation and achieving it takes careful engineering. This difficulty arises because light has an associated direction of travel. Materials bend and delay light, and how it occurs is very material dependent. Even more, different frequencies (colors) are bent and delayed differently by a given material. This is called dispersion and is perhaps most familiar as a rainbow, where the constituent colors of sunlight are separated.

Even with dispersion, some materials have naturally occurring refractive properties that allow momentum-matching, and thus frequency conversion. Until about 20 years ago, these materials were the only option for frequency conversion. In the 1990s, scientists began to tackle the momentum conservation issue using a technique called quasi-phase matching (QPM).

When a light wave enters and moves through a crystal its properties such as velocity are altered depending on its color. In the case of second-harmonic generation, the injection light strongly interacts with the medium and a second color, having twice the frequency, is generated. Due to dispersion, the second light wave will be delayed. In QPM, scientists vary the spacing and orientation between the internal crystal layers to compensate for the delay, such that momentum conservation between the injection and output light is conserved. This method of QPM is successful but can be difficult from a fabrication point-of-view. Moreover, miniaturizing their overall size for integration onto chips is limited. This is because the frequency conversion process depends on the physical length of the interaction medium, thus scaling down these types of crystals will lead to an inherent reduction in efficiency.

Now this team has demonstrated a new, arguably simpler way, to achieve QPM and thus frequency conversion. In the new design, gallium arsenide (GaAs) is fabricated into a micrometer-sized disk ‘whispering gallery’ cavity. Notably, GaAs has one of the largest second-harmonic frequency conversion constants measured. Previously, scientists have harnessed its extremely nonlinear properties through the layer-varying QPM method, leading to device sizes in the centimeter range. This new device is 1000 times smaller.

In the experiment, light from a tapered optical fiber is injected into the cavity. When light travels in a loop with the proper orientation, as opposed to a linear geometry, QPM, and therefore color conversion is achieved. This team skirts around the miniaturization problem because the light can interact many times with the medium by circulating around the disk, yet the overall size can remain small. Using a cavity also means that since the power builds up in the microdisk, less injection power can be used. Think of the architectural example of a whispering gallery—wherein sound waves add together such that small input signals (whispers) can be heard. This resonant enhancement also happens for light trapped inside microdisk cavities.

NIST scientist and author Glenn Solomon continues, “Through a combination of microcavity engineering and nonlinear optics, we can create a very small frequency conversion device that could be more easily integrated onto optical chips.”

Lead author Paulina Kuo, who is currently doing research at NIST in the Information Technology Laboratory,adds, “I am excited because this method for phase-matching is brand new. It is amazing that the crystal itself can provide the phase-matching to ensure momentum conservation, and it's promising to see efficient optical frequency conversion in a really tiny volume.”

In terms of future quantum information applications, the simple harmonic generation process can be considered as parametric down conversion (PDC) in reverse. PDC is a method for generating entangled photon pairs and so this device could provide a new technique for accomplishing this.

Gallium arsenide (GaAs) is a common semiconductor and has added benefits such as transmitting and emitting in the infrared (IR) and near IR light, respectively. IR-colored light has applications that include telecommunications and chemical sensing. Kuo adds, “The presence of an absorbing species affects the cavity resonance conditions and, in turn, the amount of frequency conversion in the microdisk. Thus, this device could be used in novel sensing applications.”

Paulina Kuo, at the time of this research, was a postdoctoral researcher at JQI. Kuo is now a staff physicist working in NIST’s Information Technology Laboratory

Jorge Bravo-Abad, at the time of this research, was a visiting professor to JQI. He is now a Ramón y Cajal Fellow (Tenure track) professor in the Condensed Matter Theory Department at Universidad Autónoma de Madrid. Notably, he recently received a MIT TR35-Spain Award, recognizing him as one of the top 10 Spanish innovators under the age of 35 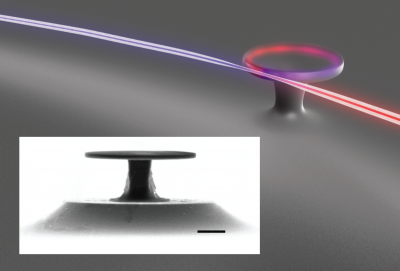 Caption: Figure and caption information from paper reprinted with permission of Authors: Input light at the fundamental wavelength (represented by red light) is converted inside the micro-disk to second harmonic light (represented by blue light). The inset shows a scanning electron micrograph of a fabricated device. The scale bar is 1 mm. For more information and figures, the paper is Open Access http://www.nature.com/ncomms/2014/140117/ncomms 4109/full/ncomms4109.html Image credit for this and rotator image: T. Thomay/JQI