Mammals' complex spines are linked to high metabolisms; we're learning how they evolved 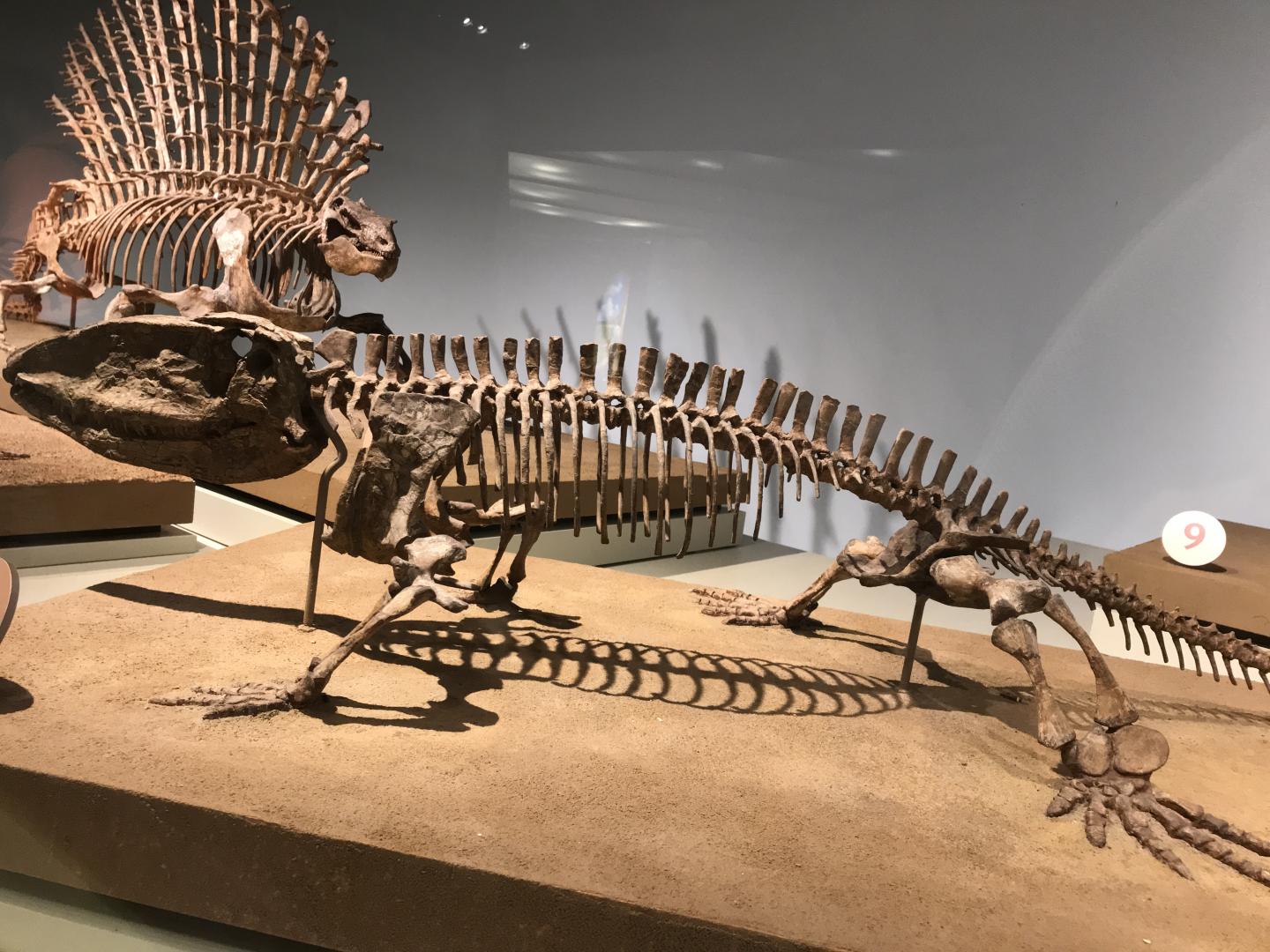 This is an early mammal relative, Ophiacodon, whose still has a relatively simple, uniform backbone. 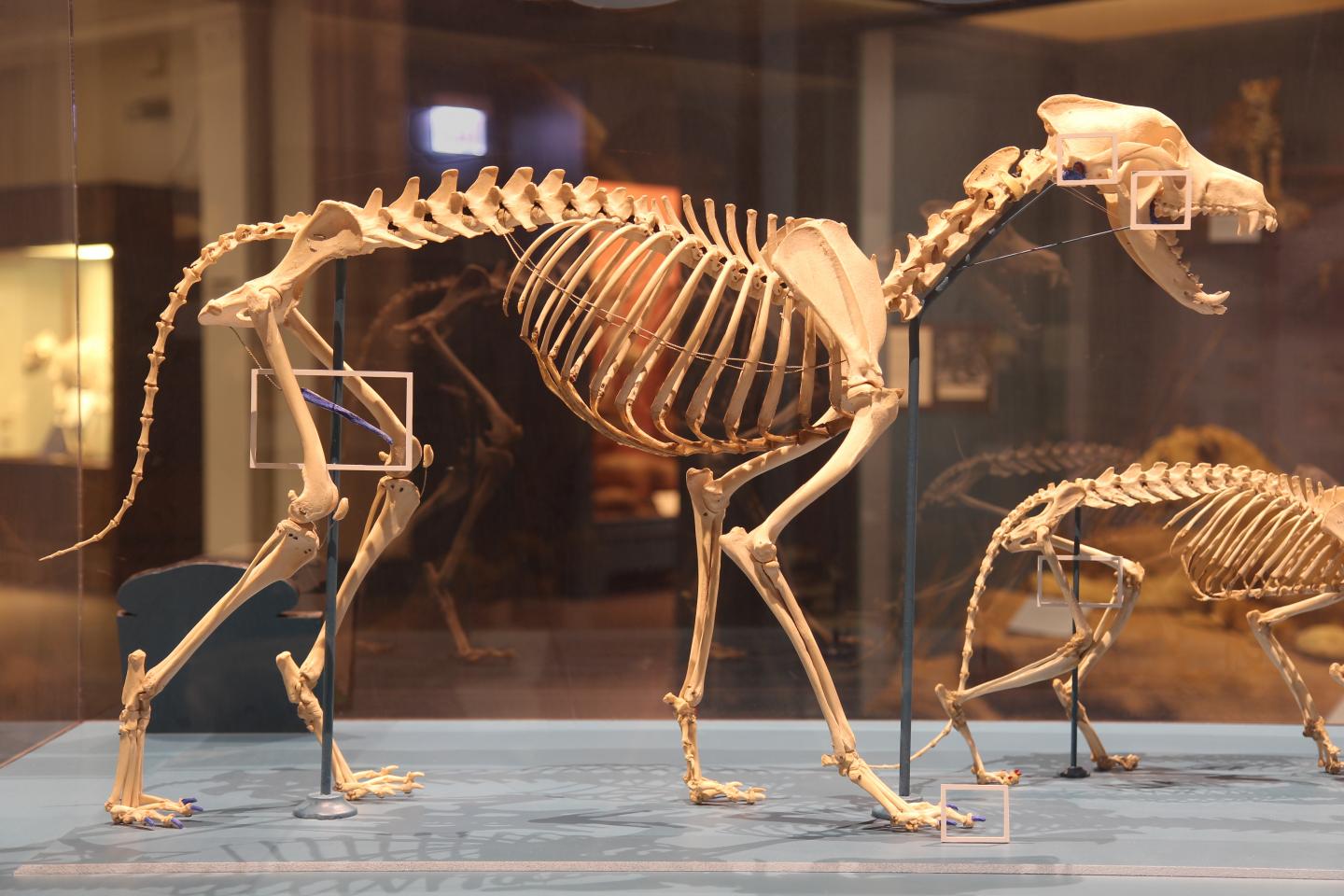 This is a modern dog skeleton, which has a complex backbone made up of different sections.

Newswise — Mammals' backbones are weird. Compared to other four-legged animals like reptiles, mammal spines are a complex mix of sections of differently-shaped bones. Our Frankenstein's monster backbones are a key component of mammals evolving the ability to move in a bunch of different ways--compare a cheetah running, a person walking, a bat flying, and a whale swimming. A new study in Nature Communications delves into the nitty-gritty of how mammals' backbones became so complex. The scientists discovered that the process was marked by big, dramatic evolutionary changes, and that it's linked to mammals being active animals with high metabolisms.

"Looking around, the animals and plants that surround us are remarkably complex, but putting a number to that phenomenon is very tricky. With this study, we wanted to take a complex system-the mammal vertebral column-and measure how its complexity changed through time. We show that increases in complexity were discrete steps like rungs on a ladder instead of a smooth increase like a ramp. Adaptations for high activity levels in mammals seem to trigger these jumps in complexity, and they continue to influence its evolution today," says Katrina Jones, the paper's first author and a paleontologist from Harvard's Museum of Comparative Zoology.

"It's basically the story of how weird mammals' backbones are and how they evolved to be like that, starting starting from ancient relatives whose spines were much simpler," says Ken Angielczyk, a paleontologist at the Field Museum and one of the study's authors. "It looks like it's not just a gradual accumulation of little changes over time--it's more discrete changes. And one of these big changes may be related to changes in how mammals are able to move and breathe that let us be so active."

Angielczyk and his co-authors, Jones and Stephanie Pierce of Harvard's Museum of Comparative Zoology, wanted to figure out how and when mammals and their ancestors first evolved these specialized backbones. They examined fossil backbones from mammal relatives called synapsids that lived between 300 and 200 million years ago and took precise measurements of the bones to determine how the spines were changing over time. They then fed all the data into a computer program that modeled the different ways that the spines might have evolved.

Based on the information from all the fossils, the model showed that the changes in synapsid backbones probably developed in comparatively quick bursts, rather than a super-slow, gradual pathway. Of course, explains Angielczyk, evolution is such a slow process that even quick bursts of evolutionary change can take millions of years. "It looks fast from our mountain-top view of evolution, but if you were one of these animals, it's not like your grandchildren would look totally different from you," he says. Rather, these big leaps really just mean that the evolutionary changes happened more quickly than what you'd expect to see in a totally random system where mutations and changes weren't good or bad, just neutral. Basically, big step-wise jumps in evolution mean that the changes that were happening made a big difference in the organisms' lives, making them better able to survive and pass on their genes.

Increasingly complex spines were such a good thing for mammal ancestors, the researchers argue, because they were part of a suite of changes related to higher activity levels.

Compared to reptiles, modern mammals have very high metabolisms--we have more chemical reactions happening to keep our bodies going--and we're more active. In general, mammals can move more efficiently and have more stamina, but those benefits come with a cost: mammals have to breathe more than reptiles do, we have to eat more, and we need fur to keep our bodies warm enough to keep our systems going. "As part of our study, we found that modern mammals with the most complex backbones also usually have the highest activity levels," says Pierce, "and some changes in in backbone complexity evolved at about the same time that other features associated with a more active lifestyle evolved, like fur or specialized muscles for breathing."

"The uniqueness of mammalian backbones is something that's been recognized for a long time, and our results show that there's a strong connection between the evolution of our backbones and the evolution of the soft tissues in our muscular and respiratory systems," says Angielczyk.

"We're interested in the big picture of how backbones evolve, and there are these long-standing ideas about it being related to the evolution of mammals' respiration, locomotion, and high acitvity levels," Angielczyk adds. "We're trying to test and refine those hypotheses, and to use them to better understand the broader question of how complexity increases through evolution."

And this big picture of how mammals' spines became complex could help to explain a lot about mammals alive today, including us. "Mammals kind of do their own thing," says Angielczyk. "If you look at mammals today, we have lots of weird features in our metabolism and our bodies and reproductive strategies. It would be really confusing to figure out how they evolved if you were only looking at modern mammals. But we have a really good fossil record of early mammal relatives, and that can help us understand the history of many of these very unusual traits."

"This study helps us answer an age-old question - how did life become so complex?" says Jones. By looking at this example system, we show that discreet changes, when added up over the millennia, can produce what seems at first glance to be a long-term trend. The evolution of complexity is, dare I say it, complex!"