This Friday, soon-to-be medical school graduates will learn where they will spend their first few years as doctors

Newswise — Each year, at precisely the same moment — 12 p.m. on the East coast, 9 a.m. on the West — thousands of graduating medical school students across the country simultaneously tear open an envelope. The single sheet of paper inside informs each graduate where he or she will do their residencies — in other words, where each will spend the first several years of their careers as working doctors.

It’s called Match Day. Started in 1952 and operated by the non-profit National Resident Matching Program, the event culminates months of applications and interviews by fourth-year medical school students, each of whom may have visited a dozen or more hospitals and institutions across the country in search of their perfect match.

Each student creates a ranking of their choices. Meanwhile, each hospital and institution creates its own list of preferred students. A computer algorithm compares the lists, crunches the numbers, generates millions of possible combinations and, finally, produces a single choice for each matched student.

This year, Match Day is Friday, March 17. The 130 members of the 2017 graduating class of the University of California San Diego School of Medicine will gather just before 9 a.m. at the Medical Education and Telemedicine Building on the La Jolla campus.

“Match Day is a dramatic and joyous event that symbolizes the start of the next phase of our students’ medical education and training in their chosen fields,” said Carolyn Kelly, MD, professor of medicine and associate dean for admissions and student affairs. “Match Day is also a delightful anachronism. The students could log into their account at a designated hour to view their match outcome. Instead, these well-kept secrets are delivered in sealed, carefully displayed envelopes, allowing the students to celebrate with their classmates, families and all of us within the medical education offices. From this standpoint, I don’t think Match Day events have changed much in the last fifty years, and that seems to be just fine with just about everyone!”

This rite of passage will be a morning full of emotion, uncertainty and celebration for UC San Diego School of Medicine students. It will mark a new chapter in their already remarkable stories. Here are three:

July Lee was born in Mexicali, a Mexican border town roughly 120 miles east of San Diego. She is one of three children born to Chinese immigrants. When she was six years old, the family immigrated to Calexico, located just north of the border in Imperial County. Her father, though, continued to cross the border to Mexicali where he worked as a chef in a Chinese restaurant.

The first time Lee seriously pondered becoming a doctor was perhaps at the age of 10 when her father was a victim of a robbery at the restaurant. Local physicians struggled to keep her father alive. They made plans to transport him to the UC San Diego Medical Center in Hillcrest for a higher level of care, but he passed away before that could happen.

"This was certainly a defining moment, but other factors also influenced my decision to pursue medicine,” said Lee, now 26. “My parent's didn’t speak English, so as a child I often accompanied them to doctor's appointments to interpret. I was also always intrigued by what doctors did.”

In Calexico, Lee learned English (to go along with her fluency in Spanish and Cantonese). She is the first generation in her family to graduate high school; the first generation to go to college (a full-ride scholarship to Stanford University). Needless to say, she will be the first doctor.

Lee’s intended specialty is pediatrics. “As a pediatrician, I get to work with one of the most vulnerable, yet resilient patient populations” she said. “I have the unique opportunity to intervene early and inspire change in the life of a young human being.” She wants to work with underserved minorities, especially Spanish-speaking. “There is a great feeling of gratitude when you can help. It doesn’t even matter the type of care. These patients often have so little.”

Lee, though, will come to her residency with more than a little experience. Each year during her medical school career, she has organized health screening events in her hometown at one of Calexico’s swap meets, bringing to her community fellow students and faculty from the School of Medicine. She has one more event scheduled on the day after Match Day.

Rene Garcia was born in a rural community in Tijuana, Mexico. His family immigrated to the San Diego area when Garcia was five years old. Garcia, whose mother only completed elementary school and whose father graduated from high school, is in the first generation of his family to go to college. He earned his bachelor’s degree at UC Berkeley. Garcia was then inspired to earn his Master of Public Health at UCLA and apply to medical school, in part because of his childhood experiences.

“I witnessed first-hand how socioeconomic factors can so often lead to health disparities in many communities,” he said.

Garcia’s father died of cancer during his second year of college.

“During that difficult time, I learned how physicians can influence lives not only through direct clinical care, but also through advocacy and compassion,” he said.

Garcia is a member of the UC San Diego School of Medicine’s Program in Medical Education – Health Equity (PRIME-HEq), which trains physicians to meet the needs of populations who are traditionally underserved by the medical system. He said one of the greatest highlights in medical school was working with a small team of fellow students to co-found the Border Health Program, which brings mobile clinics — health screenings, as well as dental and pharmacy support — to migrant farmers in the San Diego area.

Garcia hopes to match with any of the four family medicine residency programs in San Diego. “This is my community, and I hope to continue serving the underserved here,” he said.

“I can’t wait for you to be my future doctor,” said Mr. Smiley, a high school biology teacher in Chicago. Little did he know that those words inspired Elissa Kim to pursue medicine — albeit her chosen specialty of pediatrics won’t help Mr. Smiley if he falls ill.

After earning a Bachelor of Science in molecular and cellular biology from the University of Illinois, Kim left the Midwest, attracted to UC San Diego School of Medicine’s proximity to the Mexican border. The youngest daughter of two immigrants — her mother is from Finland and her father from Korea — Kim has a soft heart for global health. San Diego offered her something other medical schools couldn’t: the opportunity to work with and study alongside medical students in Mexico and the United States and the ability to learn the nuances of treating people of different cultures.

“I would work in our free clinics in Pacific Beach and Tijuana, and although just 30 miles from each other they might as well be worlds apart,” said Kim. “As the Pacific Beach women’s clinic manager, I coordinated the care and health maintenance appointments of our patients. The women of our Tijuana clinic — many of them sex workers — came with a completely different set of risk factors and concerns regarding their health. They often had never had this kind of support.”

After her third year of medical school, Kim took a sabbatical to work with Sheila Gahagan, MD, professor of pediatrics and chief of Child Development and Community Health, as part of an international research team in Santiago, Chile, studying early socioeconomic and psychosocial risk for child and adolescent obesity.

“The communications and cultural barriers taught me to be flexible and adaptive,” said Kim. “I came out of the experience stronger and I learned a lot about differing cultures, medicine and myself. I was there to see it and experience it. I didn’t have to read about it from a textbook. I will take those skills with me wherever I practice medicine.” 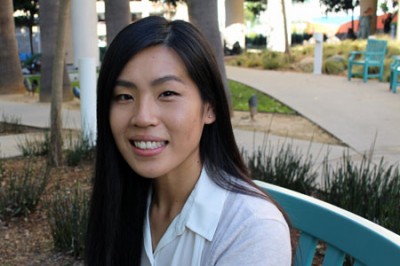 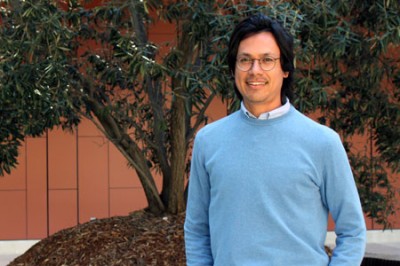 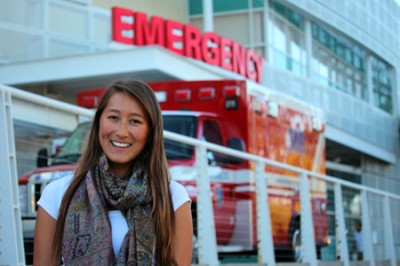 Caption: Elissa Kim has a "soft heart" for global health and wants to specialize in pediatrics.