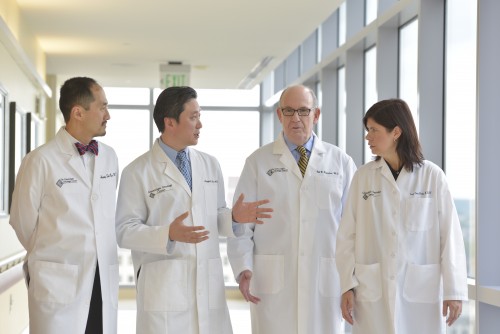 There are only 15 other such programs in the U.S. Mercy is the only community-based medical facility to receive this distinction.

Woman to Woman was founded in 2003 at Mount Sinai Hospital in New York. In 2011, OCRF, the oldest and largest charity in the United States funding ovarian cancer research, expanded the program nationally. QVC®, the world’s leading video and e-commerce retailer, is the program’s national sponsor.

According to Mercy gynecologic oncologist Dr. Teresa Diaz-Montes, the addition of the OCRF’s Woman to Woman program is another example of the hospital’s efforts to exercise a leadership role in women’s health care.

“Mercy is home to the nationally acclaimed Weinberg Center for Women’s Health and Medicine. Mercy has a relationship with the American Cancer Society, providing a Patient Navigator to help all cancer patients with issues ranging from transportation to finances, and to access community resources and support groups. And in 2014, we became the first hospital in the region to open a center specifically for the diagnosis and treatment of ovarian cancer, The Lya Segall Ovarian Cancer Institute.

“At Mercy, we believe in caring for the whole person. Cancer takes a tremendous toll on the patient-- physically, mentally, emotionally. The Woman to Woman program is now another tool we have to help women as they face their diagnosis, undergo treatment and recovery,” Dr. Teresa Diaz-Montes said.

“For women who are dealing with ovarian cancer, cervical cancer, and other forms of gyn-cancer, Woman to Woman is an empowering program that helps them deal with the challenges that come with these diseases,” said Mercy social worker and program coordinator Susan Scarvalone.

According to Scarvalone, survivor volunteers meet one-on-one with patients with whom they are matched to listen, discuss concerns, provide advice and support. “Volunteers are carefully matched to new patients based on cancer type, age, language and culture, patient preference as well as other relevant factors. They are professionally trained, learning active listening and communicating skills, and how to address cultural differences,” Scarvalone said.

In addition, survivor volunteers receive an overview of gynecologic cancers and the issues associated with them, gaining an understanding of their own relationship to their illness as they prepare to volunteer.

Scarvalone noted that Mercy hopes to enroll 10 volunteers during the first 12 months of the program.

Mercy Medical Center is a 140-year-old, university-affiliated medical facility named one of the top 100 hospitals in the U.S. by Thomson-Reuters with a national reputation for women’s health care. Mercy is home to the nationally acclaimed Weinberg Center for Women’s Health and Medicine, as well as the $400+ million, 20-story Mary Catherine Bunting Center.