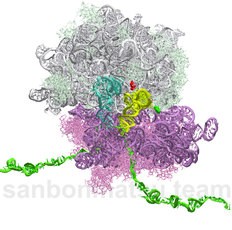 Newswise — Flash back three or four billion years — Earth is a hot, dry and lifeless place. All is still. Without warning, a meteor slams into the desert plains at over ten thousand miles per hour. With it, this violent collision may have planted the chemical seeds of life on Earth.

Scientists presented evidence today that desert heat, a little water, and meteorite impacts may have been enough to cook up one of the first prerequisites for life: The dominance of "left-handed" amino acids, the building blocks of life on this planet.

"If you mix up chirality, a protein's properties change enormously. Life couldn't operate with just random mixtures of stuff," he said.

With the exception of a few right-handed amino acid-based bacteria, left-handed "L-amino acids" dominate on earth. The Columbia University chemistry professor said that amino acids delivered to Earth by meteorite bombardments left us with those left-handed protein units.

"These meteorites were bringing in what I call the 'seeds of chirality,'" stated Breslow. "If you have a universe that was just the mirror image of the one we know about, then in fact, presumably it would have right-handed amino acids. That's why I'm only half kidding when I say there is a guy on the other side of the universe with his heart on the right hand side."

These amino acids "seeds" formed in interstellar space, possibly on asteroids as they careened through space. At the outset, they have equal amounts of left and right-handed amino acids. But as these rocks soar past neutron stars, their light rays trigger the selective destruction of one form of amino acid. The stars emit circularly polarized light—in one direction, its rays are polarized to the right. 180 degrees in the other direction, the star emits left-polarized light.

All earthbound meteors catch an excess of one of the two polarized rays. Breslow said that previous experiments confirmed that circularly polarized light selectively destroys one chiral form of amino acids over the other. The end result is a five to ten percent excess of one form, in this case, L-amino acids. Evidence of this left-handed excess was found on the surfaces of these meteorites, which have crashed into Earth even within the last hundred years, landing in Australia and Tennessee.

Breslow simulated what occurred after the dust settled following a meteor bombardment, when the amino acids on the meteor mixed with the primordial soup. Under "credible prebiotic conditions" — desert-like temperatures and a little bit of water — he exposed amino acid chemical precursors to those amino acids found on meteorites.

Breslow and Columbia chemistry grad student Mindy Levine found that these cosmic amino acids could directly transfer their chirality to simple amino acids found in living things. Thus far, Breslow's team is the first to demonstrate that this kind of handedness transfer is possible under these conditions.

Breslow found that the left and right-handed amino acids would bind together as they crystallized from water. The left-right bound amino acids left the solution as water evaporated, leaving behind increasing amounts of the left-amino acid in solution. Eventually, the amino acid in excess became ubiquitous as it was used selectively by living organisms.

Other theories have been put forth to explain the dominance of L-amino acids. One, for instance, suggests polarized light from neutron stars traveled all the way to earth to "zap" right-handed amino acids directly. "But the evidence that these materials are being formed out there and brought to us on meteorites is overwhelming," said Breslow.

The steps afterward that led towards the genesis of life are shrouded in mystery. Breslow hopes to shine more light on prebiotic Earth as he turns his attention to nucleic acids, the chemical units of DNA and its more primitive cousin RNA.

"This work is related to the probability that there is life somewhere else," said Breslow. "Everything that is going on on Earth occurred because the meteorites happened to land here. But they are obviously landing in other places. If there is another planet that has the water and all of the things that are needed for life, you should be able to get the same process rolling."

The paper on this research, ORGN 001, will be presented at 8:30 a.m. on Sunday, April 6, at the Morial Convention Center — La Nouvelle, Ballroom C, during the symposium, "James Flack Norris Award in Physical Organic Chemistry: Symposium in Honor of Dennis A. Dougherty."

AbstractFor life to start, it is critical that the chiral building blocks such as amino acids and sugars be present in a significant enantiomeric excess. How did this arise?Interestingly, carbonaceous chondritic meteorites land on Earth with some amino acids in enantiomeric excess, those with alpha methyl groups instead of hydrogens, so racemization is blocked. We have shown how that chiral excess can be incorporated into normal amino acids under credible prebiotic conditions, and how the resulting e.e.s can be amplified to high values. The origins of the alpha methyl amino acids with partial chirality will also be discussed, including the role of synchrotron radiation by neutron stars. ________________________________________Researcher Provided Non-Technical Summary Briefly explain in lay language what you have done, why it is significant and what are its implications (particularly to the general public)

People, as well as all living organisms, contain only one of two possible forms of amino acids, termed L-amino acids (as opposed to D-amino acids which are not found in living systems). We were curious as to how this phenomenon arose on early earth, and found a potential answer by studying organic compounds that are delivered to earth by meteorites. Derivatives of amino acids that have been found on these meteorites contain measurable excesses of L-amino acids. The excesses found in these derivatives were likely formed from synchrotron radiation of neutron stars. We studied how these derivatives can transfer their L-excesses to amino acids found in living systems, as well as how the excesses can be amplified up to nearly 100% L. These processes could have plausibly occurred on early earth, and would have provided the 100% L excess of amino acids that is necessary for life to start.