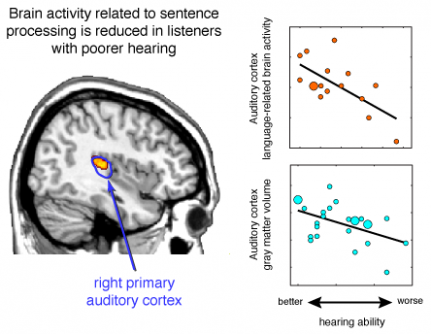 Newswise — PHILADELPHIA - A new study by researchers from the Perelman School of Medicine at the University of Pennsylvania shows that declines in hearing ability may accelerate gray mater atrophy in auditory areas of the brain and increase the listening effort necessary for older adults to successfully comprehend speech. When a sense (taste, smell, sight, hearing, touch) is altered, the brain reorganizes and adjusts. In the case of poor hearers, researchers found that the gray matter density of the auditory areas was lower in people with decreased hearing ability, suggesting a link between hearing ability and brain volume. "As hearing ability declines with age, interventions such as hearing aids should be considered not only to improve hearing but to preserve the brain," said lead author Jonathan Peelle, PhD, research associate in the Department of Neurology. "People hear differently, and those with even moderate hearing loss may have to work harder to understand complex sentences." In a pair of studies, researchers measured the relationship of hearing acuity to the brain, first measuring the brain's response to increasingly complex sentences and then measuring cortical brain volume in auditory cortex. Older adults (60-77 years of age) with normal hearing for their age were evaluated to determine whether normal variations in hearing ability impacted the structure or function of the network of areas in the brain supporting speech comprehension. The studies found that people with hearing loss showed less brain activity on functional MRI scans when listening to complex sentences. Poorer hearers also had less gray matter in the auditory cortex, suggesting that areas of the brain related to auditory processing may show accelerated atrophy when hearing ability declines. In general, research suggests that hearing sensitivity has cascading consequences for the neural processes supporting both perception and cognition. Although the research was conducted in older adults, the findings also have implications for younger adults, including those concerned about listening to music at loud volumes. “Your hearing ability directly affects how the brain processes sounds, including speech,” says Dr. Peelle. “Preserving your hearing doesn’t only protect your ears, but also helps your brain perform at its best.” The research appears in the latest edition of The Journal of Neuroscience and was funded by the National Institutes of Health. Physicians should monitor hearing in patients as they age, noting that individuals who still fall within normal hearing ability may have increasing complaints of speech comprehension issues. Patients should talk to their physician or an audiologist if they are experiencing any difficulty hearing or understanding speech. ###

Penn Medicine is one of the world's leading academic medical centers, dedicated to the related missions of medical education, biomedical research, and excellence in patient care. Penn Medicine consists of the Raymond and Ruth Perelman School of Medicine at the University of Pennsylvania (founded in 1765 as the nation's first medical school) and the University of Pennsylvania Health System, which together form a $4 billion enterprise.

Penn's Perelman School of Medicine is currently ranked #2 in U.S. News & World Report's survey of research-oriented medical schools and among the top 10 schools for primary care. The School is consistently among the nation's top recipients of funding from the National Institutes of Health, with $507.6 million awarded in the 2010 fiscal year.