Bat experts says handle with care or call a professional 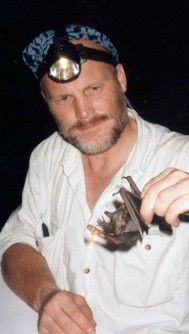 South Dakota State University Professor Scott Pedersen holds an Antillean fruit-eating bat captured on the Caribbean island of Montserrat in the British West Indies. Pedersen made 13 trips to the island to survey bats that are threatened by an active volcano on the island.

Newswise — Rustling or scratching sounds coming from the eaves troughs at 3 a.m. may be a telltale sign that you’ve got “bats in the belfry.”

Residents across the state are noticing more bats this summer—and that’s a good thing, according to South Dakota State University biology and microbiology professor Scott Pedersen. “These critters eat so many mosquitoes and crop pests,” said Pedersen, who is co-chair of the South Dakota Bat Working Group.

Pedersen typically gets calls about bats in and around buildings in August and September. This coincides with young male bats being encouraged to leave the nests where they were raised and fend for themselves. Essentially, Pedersen said, “They aren’t very good at it, so find themselves in make-shift roosts, such as garages and front porches, that are more obvious to humans.”

In the last two weeks, Brookings Animal Control Officer Duane Walburg has received eight to 10 calls about bats. “It’s a bit unusual,” he said, noting that one day he had three calls. “As long as we have eyes on it, we will remove a bat or two, but we do not search for them,” Walburg said. However, for a larger number of bats, residents will have to contact a bat control expert.

Pedersen estimated that 90 percent of the bats he collects at private residences and buildings on campus are young males. In addition, young bats, regardless of gender, can be easily separated from their mothers when they are hunting for bugs to eat, whether trying to evade a hungry owl or getting caught in strong winds and rain. “These youngsters are not strong flyers,” Pedersen added.

Homeowners can also displace bats that they often didn’t even know were there by cleaning out and/or replacing gutters, soffits and shingles in the fall, Pedersen explained. The South Dakota Bat Working Group website, www.sdbwg.org, has instructions on what those who find bats should do, as well as how to prevent the bats from returning.

“Never handle bats without wearing leather gloves,” warned Pedersen, due to the risk of contracting rabies from a bat bite. “If you get bit, be sure to capture the bat and have it tested for rabies. If you don’t hang onto the bat, you’ll need to get rabies shots.”