Much Ado About Nothing: Astronomers Use Empty Space to Study the Universe

A lot of information contained in cosmic voids, study suggests 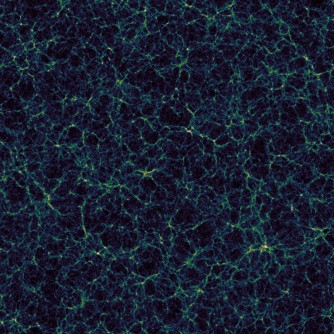 This simulation of the large-scale structure of the universe reveals the cosmic web of galaxies and the vast, empty regions known as voids.

Newswise — COLUMBUS, Ohio—Researchers who are looking for new ways to probe the nature of gravity and dark energy in the universe have adopted a new strategy: looking at what’s not there.

In a paper to appear in upcoming issue of Physical Review Letters, the international team of astronomers reports that they were able to achieve four times better precision in measurements of how the universe’s visible matter is clustered together by studying the empty spaces in between.

Sutter likened the new technique to “learning more about Swiss cheese by studying the holes,” and offered another analogy to explain why astronomers would be interested in the voids of space.

“Voids are empty. They’re boring, right? Galaxies are like the cities of the universe, full of bright lights and activity, and voids are like the miles and miles of quiet farmland in between,” Sutter explained.

“But we’re looking for bits of evidence that general relativity might be wrong, and it turns out that all the activity in galaxies makes those tiny effects harder to see. It’s easier to pick up on effects in the voids, where there’s less distraction—like it’s easier to spot the glimmer of a firefly in a dark cornfield than in a lit-up city bustling with nightlife.”

The voids, he pointed out, are only empty in the sense that they contain no normal matter. They are, in fact, full of invisible dark energy, which is causing the expansion of the universe to accelerate.

While Einstein’s 1915 general theory of relativity goes a long way toward explaining gravity in the universe, Einstein couldn’t have known about dark energy. That’s why, today, astronomers are working to find out whether the rules of general relativity hold up in a universe dominated by it.

Sutter, in Ohio State’s Department of Astronomy, worked with colleagues in Germany, France and Italy to compare computer simulations of voids in space with a portion of data from the Sloan Digital Sky Survey. The statistical analysis revealed a four-times improvement in precision in their models of matter density and the growth of cosmological structure when they took the physics of voids into account.

They were looking for tiny deviations in void behavior that conflicted with general relativity, and they found none. So Einstein’s theory of gravity holds true for now. The analysis and models are publicly available online, so the researchers hope that others will use them to do further work in the future.

“Our results demonstrate that a lot of unexplored cosmological information can be found in cosmic voids,” Sutter concluded. “It’s truly like getting something from nothing.”

The study’s first author was Nico Hamaus of Universitäts-Sternwarte München in Germany. Other authors included Alice Pisani, Guilhem Lavaux, Stéphanie Escoffier, Benjamin D. Wandelt and Jochen Weller, all of whom have one or more appointments among the following institutions: Aix Marseille University and the Institute d’Astrophyisique de Paris, France; The National Institute for Nuclear Physics and the Osservatorio Astronomico di Trieste, Italy; the University of Illinois at Urbana-Champaign; and the Max Planck Institute for Extraterrestrial Physics and the Excellence Cluster Universe in Garching, Germany.

This research is funded by the Institut Lagrange de Paris, the French National Research Agency and the National Science Foundation (NSF). Computations were done on the HORIZON computer cluster at the Institut d’Astrophysique de Paris. Funding for the Sloan Digital Sky Survey is provided by the Alfred P. Sloan Foundation, participating institutions, NSF and the U.S. Department of Energy.