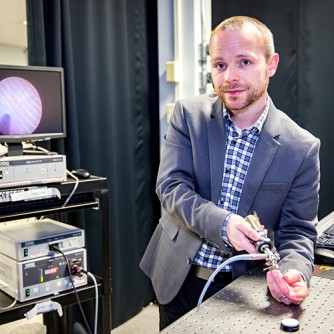 Newswise — FAYETTEVILLE, Ark. – Tim Muldoon, assistant professor of biomedical engineering, has received a $500,000 Faculty Early Career Development Program award from the National Science Foundation to continue his work on an endoscopic probe that can be used in colonoscopies. The device is intended to provide superior images of living tissue within the gastrointestinal tract and other structures.

The research could be a major development in the prevention and treatment of colon cancer. It could also improve the fundamental understanding of the relationship between abnormal cell progression and delivery of blood and oxygen in primary tumors of the colon.

According to the U.S. Department of Health and Human Services, colon cancer is the third most common cancer in the United States and the second leading cause of death from cancer. However, with early screening – usually beginning at age 50 – most occurences of colon cancer can be prevented. March is Colorectal Cancer Awareness Month.

Existing endoscopic imaging methods, such as confocal or optical coherence tomography, do not sufficiently create three-dimensional images of tissue or quantify hemoglobin concentrations. Hemoglobin is a complex, iron-containing protein found inside red blood cells. It helps deliver oxygen to living cells and tissues.

Muldoon’s tomographic endoscope, with an outer diameter of less than 2 millimeters, is a single fiber optic bundle that includes thousands of flexible, small-caliber fibers. It illuminates the gastrointestinal tract and provides high-resolution images in real time.

The device also features an outer ring of individual optical fibers that can be sequentially programmed to illuminate the tissue and collect a number of image slices. These image slices can be reprocessed to provide a three-dimensional map of tissue and small blood vessels beneath the probe.

The tissue maps created by Muldoon’s scope can help clinicians quantify hemoglobin concentrations and detect any abnormal blood vessels, both of which might be an indication of abnormal amounts of blood and oxygen in the tissue. Muldoon’s team will test the probe on mice models with primary colorectal adenocarcinoma, a type of cancer. Subsequent tests will focus on the device’s performance in a therapeutic context, specifically quantifying microvessels and hemoglobin levels within tumors in response to different forms of therapy.

About CAREER Awards: The Faculty Early Career Development Program, better known as CAREER, is the National Science Foundation’s most prestigious award in support of junior faculty who exemplify the role of teacher-scholars through outstanding research and education and integration of both within the context of their institution’s mission. Research activities supported by CAREER awards build the foundation for a lifetime of leadership in integrating education and research.