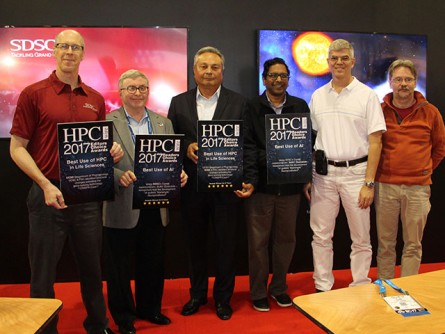 Newswise — The San Diego Supercomputer Center (SDSC) at the University of California San Diego received two key HPCwire awards for 2017, recognizing the use of its Comet supercomputer in the areas of artificial intelligence (AI) research and the life sciences. The online news organization covering high-performance computing and applications recognized SDSC and partner institutions with the following awards:

The awards were presented at the 2017 International Conference for High Performance Computing, Networking, Storage and Analysis (SC17), in Denver, CO.

“These two awards recognize not only the significance of such research breakthroughs in AI and genetics research, but the fact that supercomputers such as Comet are now crucial resources to enable such advances in ‘Grand Challenge’ areas identified by the National Science Foundation, in this case Enriching Human Life and Society and Working at the Human-Technology Frontier,” said SDSC Director Michael Norman.

“From innovative industry leaders to the end consumer, the HPCwire readership reaches and engages every aspect of the high-performance computing community,” said Tom Tabor, CEO of Tabor Communications, publisher of HPCwire. “We proudly recognize these efforts and achievements and gladly allow the voices of our readers to be heard. Our sincere congratulations to all of the winners.”

Best Use of AI

By applying a novel computer algorithm to mimic how the brain learns, a team of researchers – with the aid of SDSC’s Comet supercomputer and the Center’s Neuroscience Gateway – has identified and replicated neural circuitry that resembles how an unimpaired brain controls limb movement.

William Lytton, a professor of physiology and pharmacology at State University of New York’s Downstate Medical Center, is the study’s principal investigator. Lytton worked with Amit Majumdar, director of SDSC’s Data Enabled Scientific Computing division, and his team by using Comet to run through thousands of modeling possibilities to create a neuroprosthetic arm. Majumdar also is the PI for the NSF-funded Neuroscience Gateway.

The research was published in the March-May 2017 issue of the IBM Journal of Research and Development and opens the door for “biomimetic neuroprosthetics” -- brain implants that replicate brain circuits and their function -- that one day could replace lost or damaged brain cells or tissue from tumors, stroke, and other diseases. Subhashini Sivagnanam, a senior scientific computing specialist at SDSC and co-PI of the NSG project, is a co-author of the IBM Journal paper.

Best Use of HPC in Life Sciences

A team led by researchers at UC San Diego has captured in step-by-step atomic detail the editing of DNA strands by CRISPR (Clustered Regularly Interspaced Short Palindromic Repeats)-Cas9, the innovative gene-splicing technology that in recent years has transformed the field of genetic engineering.

Researchers from the McCammon Lab at UC San Diego used SDSC’s Comet supercomputer – in addition to SDSC’s Triton Shared Computing Cluster (TSCC) and Bridges at the Pittsburgh Supercomputing Center – to perform atomistic molecular dynamics, a method that captures a more complete vision of the myriad shapes and conformations that a target protein molecule may go through at petascale speeds (one quadrillion arithmetic calculations per second).

By shedding light at atomic level scale on the biophysical details governing the mechanics of CRISPR-Cas9 activity, the study provides a fundamental framework for designing a more efficient and accurate genome-splicing technology that doesn’t yield “off-target” DNA breaks currently frustrating the potential of the CRISPR-Cas9- system, particularly for clinical uses.

More information on these awards can be found at the HPCwire website (http://www.HPCwire.com) or on Twitter through the following hashtag: #HPCwireAwards.

About the HPCwire Awards

The annual HPCwire Readers’ and Editors’ Choice Awards are determined through a nomination and voting process with the global HPCwire community, as well as selections from the HPCwire editors. The awards are an annual feature of the publication and constitute prestigious recognition from the HPC community. These awards are announced at the start of the annual Supercomputing Conference. More information about the awards can be found at the HPCwire website or on Twitter through the following hashtag: #HPCwireAwards.

As an Organized Research Unit of UC San Diego, SDSC is considered a leader in data-intensive computing and cyberinfrastructure, providing resources, services, and expertise to the national research community, including industry and academia. Cyberinfrastructure refers to an accessible, integrated network of computer-based resources and expertise, focused on accelerating scientific inquiry and discovery. SDSC supports hundreds of multidisciplinary programs spanning a wide variety of domains, from earth sciences and biology to astrophysics, bioinformatics, and health IT. SDSC’s Comet joins the Center’s data-intensive Gordon cluster, and are both part of the National Science Foundation’s XSEDE (Extreme Science and Engineering Discovery Environment) program.