Music Has Powerful (and Visible) Effects on the Brain

Especially when you’re listening to a favorite song 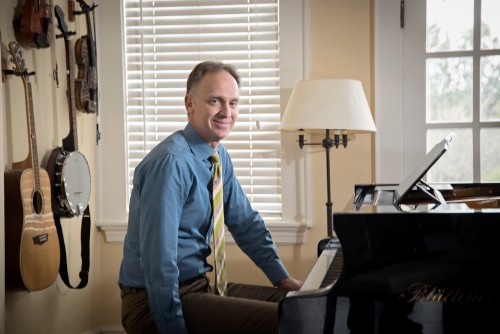 Dr. Jonathan Burdette in the music room of his Winston-Salem, N.C., home. A neuroradiologist at Wake Forest Baptist Medical Center, Burdette has conducted research into the effects of music on the brain.

These composite images from fMRI scans illustrate the locations and levels of brain activity in study participants as they listened to music they liked (left), disliked (center) and chose as their favorite (right).

Newswise — WINSTON-SALEM, N.C. – April 12, 2017 – It doesn’t matter if it’s Bach, the Beatles, Brad Paisley or Bruno Mars. Your favorite music likely triggers a similar type of activity in your brain as other people’s favorites do in theirs.

That’s one of the things Jonathan Burdette, M.D., has found in researching music’s effects on the brain.

“Music is primal. It affects all of us, but in very personal, unique ways,” said Burdette, a neuroradiologist at Wake Forest Baptist Medical Center. “Your interaction with music is different than mine, but it’s still powerful.

“Your brain has a reaction when you like or don’t like something, including music. We’ve been able to take some baby steps into seeing that, and ‘dislike’ looks different than ‘like’ and much different than ‘favorite.’”

To study how music preferences might affect functional brain connectivity – the interactions among separate areas of the brain – Burdette and his fellow investigators used functional magnetic resonance imaging (fMRI), which depicts brain activity by detecting changes in blood flow. Scans were made of 21 people while they listened to music they said they most liked and disliked from among five genres (classical, country, rap, rock and Chinese opera) and to a song or piece of music they had previously named as their personal favorite.

The researchers also found that listening to favorite songs altered the connectivity between auditory brain areas and a region responsible for memory and social emotion consolidation.

“Given that music preferences are uniquely individualized phenomena and that music can vary in acoustic complexity and the presence or absence of lyrics, the consistency of our results was unexpected,” the researchers wrote in the journal Nature Scientific Reports (Aug. 28, 2014). “These findings may explain why comparable emotional and mental states can be experienced by people listening to music that differs as widely as Beethoven and Eminem.”

Not surprising to Burdette was the extent of the connectivity seen in the participants’ brains when they were listening to their favorite tunes.

“There are probably some features in music that make you feel a certain way, but it’s your experience with it that is even more important,” said Burdette, who also is professor of radiology and vice chairman of research at Wake Forest School of Medicine. “Your associations with certain music involve many different parts of the brain, and they’re very strong.

In other research projects, Burdette and colleagues at the School of Medicine and the University of North Carolina-Greensboro have found that trained music conductors are likely to be better at combining and using auditory and visual clues than people without musical training; that activity in brain areas associated with vision decreases during tasks that involve listening; and that different levels of complexity in music can have different effects on functional brain connectivity.

“I find this type of work fascinating, because I think music is so important,” Burdette said. “If science can help get more people to recognize what music does to and for us, great.”

Music is just a small part of Burdette’s research activities – his most recently published study, for example, showed that brain volume could be an accurate predictor of success in weight-loss attempts by the elderly – but it has long been a big of part his life.

Burdette grew up playing viola, piano and guitar. He has been singing since childhood and continues to do so, including in the chorus in productions staged by the Piedmont Opera, of which he has been a board member for more than 10 years. He’s also done some conducting. His wife, Shona Simpson, plays piano. Their three teenage daughters – Fiona, Ellie and Jessie – perform professionally as the Dan River Girls. His brother, Kevin, is a singer who has appeared as a soloist with the Metropolitan Opera, Los Angeles Philharmonic and other top-tier opera companies and symphony orchestras.

“Music is my avocation,” the physician in the family said. “Radiology is my vocation.”

Burdette additionally has deep interest, if not direct involvement, in music’s clinical applications.

“Music isn’t going to cure anything, but it definitely can play a therapeutic role,” he said.

In countries such as Germany, Burdette noted, music therapy is commonly an integral part of the rehabilitation process for people who have had strokes, brain surgery or traumatic brain injuries.

“If you’re trying to restore neuroplasticity in the brain, to re-establish some of the connections that were there before the injury, music can be a big help, and I’d like to see it used more widely in this country,” he said.

Burdette also is a proponent of programs that help people with Alzheimer’s, dementia and other cognitive and physical problems re-connect with the world through music. One such program is Music & Memory, which employs iPods with customized playlists featuring songs popular when the participating individual was under 30 years old.

“You can actually see the power of music,” Burdette said. “People who were just sitting there, not engaged in anything, light up when they start hearing music from when they were 25.

“It’s fantastic. What else can do that? I can’t think of anything other than music.” 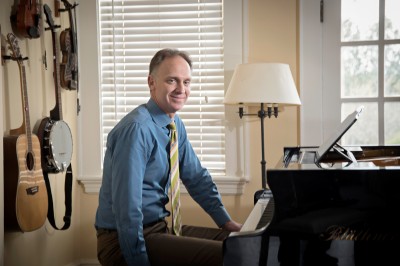 Caption: Dr. Jonathan Burdette in the music room of his Winston-Salem, N.C., home. A neuroradiologist at Wake Forest Baptist Medical Center, Burdette has conducted research into the effects of music on the brain.

Caption: These composite images from fMRI scans illustrate the locations and levels of brain activity in study participants as they listened to music they liked (left), disliked (center) and chose as their favorite (right).