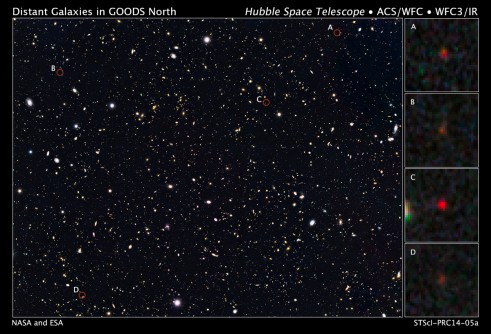 Newswise — NASA's Hubble Space Telescope and Spitzer Space Telescope joined forces to discover and characterize four unusually bright galaxies as they appeared more than 13 billion years ago, just 500 million years after the big bang. Although Hubble has previously identified galaxies at this early epoch, astronomers were surprised to find objects that are about 10 to 20 times more luminous than anything seen previously. "These just stuck out like a sore thumb because they are far brighter than we anticipated," explained Garth Illingworth of the University of California at Santa Cruz. "There are strange things happening regardless of what these sources are. We're suddenly seeing luminous, massive galaxies quickly build up at such an early time. This was quite unexpected." The tiny galaxies are bursting with star formation activity, which accounts for their brilliance. The brightest one is forming stars approximately 50 times faster than the Milky Way does today. Although these fledgling galaxies are only one-twentieth the size of the Milky Way, they probably contain around a billion stars crammed together. The astronomers were puzzled to find the four galaxies appearing in one of the two Great Observatories' deep survey fields, more than has been found in the other previously studied field that is in the opposite direction on the sky. "It was amazing to find four very luminous galaxies in one area in the early universe," said Rychard Bouwens at Leiden University in the Netherlands. "They would have needed to grow very fast." The galaxies were first detected with Hubble, whose sharp images are crucial to finding such distant galaxies and enabled the astronomers to measure their star-formation rates and sizes. Using Spitzer, the astronomers were able to estimate the stellar masses by measuring the total stellar luminosity of the galaxies. "This is the first time scientists were able to measure an object's mass at such a huge distance," said Pascal Oesch, also of the University of California at Santa Cruz (now at Yale University in New Haven, Conn.), "It's a fabulous demonstration of the synergy between Hubble and Spitzer."

Ivo Labbé, also at Leiden University added. "At the same time, the extreme masses and star formation rates are really mysterious, and we are eager to confirm them with future observations on our powerful telescopes." These bright, young galaxies are thought to have grown from interactions and mergers of smaller infant galaxies that started forming stars even earlier in the universe. Since the ancient time billions of years ago when the light that we now see started its long journey to us, they have probably kept growing to become similar to the largest modern galaxies. Many of the stars of these infant galaxies likely live on today in the centers of giant elliptical galaxies, much larger even than our own Milky Way. This result is very encouraging for NASA's upcoming James Webb Space Telescope. It tells scientists that as we look back to even earlier times, we should find lots of young, growing galaxies that can be studied in detail with the Webb Telescope. If galaxies like this existed a few hundred million years after the big bang, the Webb telescope should be able to see them easily.

For images of the galaxies in this study and more information, visit:

For more information about the Hubble Space Telescope, visit: