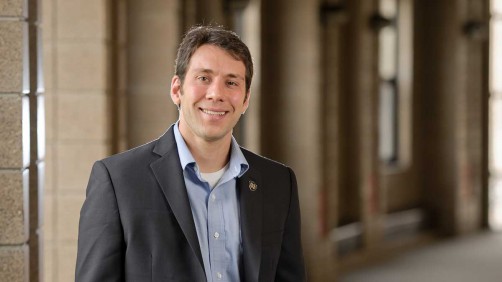 Justin R. Crepp, associate professor of physics in the College of Science at the University of Notre Dame and director of the Engineering and Design Core Facility

Newswise — Are we alone?

That’s the big question the National Academy of Sciences (NAS) Committee on Exoplanet Science Strategy would like to answer. Its priorities and recommendations for the next decade’s search for habitable worlds outside the solar system include launching a direct-imaging mission into space and building more powerful telescopes.

Justin R. Crepp, associate professor of physics in the College of Science at the University of Notre Dame and director of the Engineering and Design Core Facility, was one of 14 members who served on the committee that is part of the upcoming 2020-2030 NAS decadal survey in astronomy, astrophysics and planetary science. In a nearly 260-page report released Wednesday (Sept. 5), the committee, which met from February through August, outlined seven recommendations in order to advance exoplanet science.

Thousands of planets have already been discovered since 1995, but researchers expect billions more exist — and need to be investigated.

“Our ultimate goals are to image a planet, study its atmosphere and search for biomarkers that could point to life,” Crepp said. “The biggest question is, are we alone? Ultimately that’s what we are attempting to answer and what motivates people to come to work every day.”

To achieve that goal, the committee’s first two recommendations tackle building telescopes on the ground and launching one into space. Not only should NASA launch a mission capable of measuring the reflected light spectrum of planets orbiting sun-like stars, according to the committee, but the National Science Foundation (NSF), which funds ground-based telescopes, should fully invest in two large telescopes that have been in the planning stages for some time.

In the 2010 Decadal Survey, the NAS’ primary recommendation was to launch the Wide Field Infrared Survey Telescope (WFIRST), which will use sensitive technology to conduct a survey of distant planets in the outer regions of planetary systems. The committee noted that the WFIRST program, which has faltered because of inconsistent funding issues but is now in the preliminary design stages, is crucial to the future discovery of planets including those that could support life. The committee also recommended that NASA ensure exoplanet research will be conducted in the early stages of another planned mission, the James Webb Space Telescope, which may be launched as early as 2021.

Once potential planets are identified, knowing their masses is crucial, according to Crepp. Knowledge of mass helps researchers understand the composition of planets and well as interpret the type of atmosphere they have. Therefore, the committee is also urging NASA and the NSF to establish a joint initiative to support and advance the science of obtaining ultra-precise radial velocity measurements, which will provide essential mass, orbit and census information. The two agencies have rarely before embarked on a joint initiative of this scope.

Final recommendations include creating avenues for collaboration among interdisciplinary teams, as well as forming a robust individual investigator program that includes grants for theoretical, laboratory and ground-based telescopic research.

“The work we are doing is so complex that not one person can do it; not one group can do it. Not even one institute can do it,” Crepp said. “Finding planets that could support life requires the work of many people from different disciplines who have different types of expertise.”

The committee’s recommendations will be reviewed by the United States Congress and will be taken into consideration for inclusion in the final NAS decadal survey that will advise funding for all fields in astrophysics. Crepp expects that the recommendations to fund the search for exoplanets, as well as for advancing astrobiology — the study of potential extraterrestrial life — will be predominant in the survey.

“The general public wants to know if there is life elsewhere,” he said.