Three-dimensional printing is a game changer 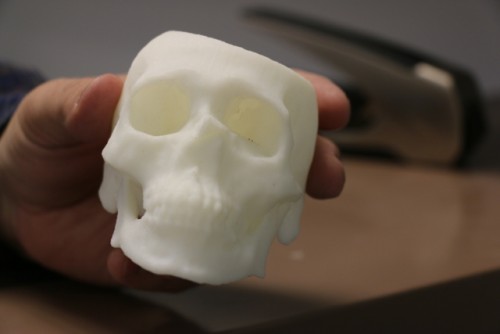 Newswise — If you ask John Tester about NAU’s technological strides during the past few years, be prepared for a long answer. In addition to teaching classes, the associate professor of mechanical engineering heads up the university’s RAPIDLab, home to 3D printers and other machines used to turn research ideas into prototypes.

“One of the reasons you do 3D printing is you don’t have to set up a machine for machine parts and buy all the tools. Instead, you have the computer-aided design, push a button and it prints out,” said Tester, who called the process quicker and more accurate than traditional manufacturing systems.

Earlier three-dimensional printers used a powder substance to print multiple layers. Today’s most popular systems extrude a thin bead of polymer onto layers that are vertically built up, creating everything from building models, machine components and body parts. The past five years have brought the purchase of NAU’s 3D printers, a portable coordinate measuring machine and a computer numerical control machine that makes complex parts. The technology was paid for in part by the Governor’s Office of Economic Recovery and the state’s technology, research and initiative funds. Tester and the lab’s support personnel have worked on numerous projects, including a device that extracts a bullet’s hammer-strike fingerprint to help law enforcement identify guns used for a crime and a tool to identify the presence of chemicals and compounds in water.

RAPIDLab is an acronym: realization of advanced design, products and intelligent designs. “It is really a service organization to create designs that faculty have in their heads or that are coming out of their research so they can use them or bring the prototypes to conferences,” Tester said.

When Kiisa Nishikawa had a concept for a prosthetic, she sought out Tester’s engineering help.

"I haven’t been doing so much of the rapid prototyping and 3D printing, we’ve been developing algorithms and actuators based on our ideas about how muscles work,” said, Nishikawa referring to technology in a foot ankle prosthesis. “The project is actually to make the motor in the prosthesis work as though it were a muscle.”

NAU and Nishikawa are in the third year of a collaboration with a prosthetics company called iWalk.

Nishikawa’s example of turning an idea into a product, facilitated by the engineering and manufacturing expertise of Tester and his lab workers, is part of the university’s mission. Lesley Cephas, director of Intellectual Property and Technology Transfer, said NAU has an obligation as a public university to further expertise and research capacity that benefits citizens of Arizona.

“More and more, research is becoming an important part of the economic impact that the university has on the region and state, not just in conducting research, but also in the form of research outcomes that can result in the creation of jobs, in addition to revenue that comes back to the university and to the creators of intellectual property,” Cephas said.

NAU contributes about $30 million each year in research-related expenditures, said Cephas, who expects the university’s innovation and research to play even bigger roles in the future.

For Tester, Cephas has provided vision for the RAPIDLab mission, and his former mentor, retired mechanical engineering professor David Hartman, the credo: “We design and build neat stuff.”